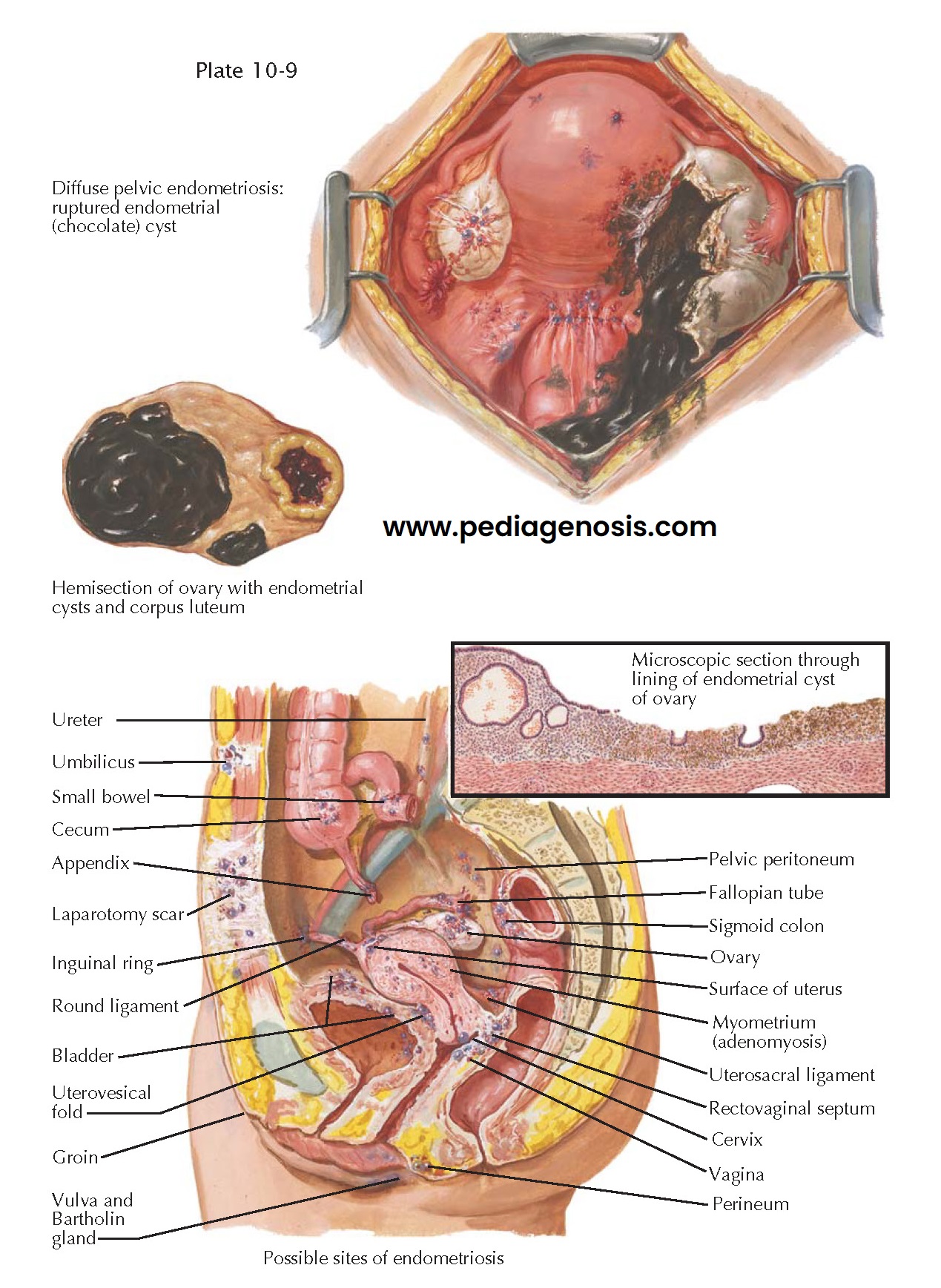 Endometriosis refers to the growth of endometrium outside of its normal intrauterine location (ectopic) that retains the histologic characteristics and biologic response of the endometrium. It is nonneoplastic, that is, incapable of autonomous growth, but it is dependent on estrogenic and progesterone stimulation. Endometriosis may arise by one of several proposed mechanisms—lymphatic spread, metaplasia of coelomic epithelium or müllerian rests, seeding by retrograde menstruation, or direct hematogenous spread. Instances of presumed iatrogenic spread (surgical) have been reported. A role for an immunologic defect is debated but remains to be conclusively established. The greatest incidence occurs between 30 and 40 years of age and may be found in 5% to 15% of women, 20% of gynecologic laparotomies, 30% of chronic pain patients, and 30% to 50% of infertility patients.

Small lesions may be asymptomatic (30%). The diagnosis may be suggested by the presence of infertility, dysmenorrhea, sacral backache, deep thrust dyspareunia, and abnormal uterine bleeding. Pain caused by endometriosis characteristically begins premenstrually and ceases shortly after the menstrual ﬂow is established. Involvement of the rectovaginal septum, cul-de-sac, or rectal wall may be responsible for rectal pain. If bowel endometriosis has penetrated the intestinal wall, the rectum may bleed cyclically. Bladder endometriosis may cause periodic hematuria and bladder irritability.

The presumptive diagnosis of pelvic endometriosis is based on the history, the absence of a previous pelvic infection, and characteristic ﬁndings on bimanual vaginal and rectal examinations. A ﬁnal diagnosis requires laparoscopy, laparotomy, or histologic conﬁrmation. Pelvic examination may reveal the presence of small, ﬁrm, tender, ﬁxed nodules in the region of the uterosacral ligaments, the posterior cul-de-sac, and the posterior surface of the uterus. The uterus is not infrequently retroverted, retroﬂexed, and ﬁxed. Endometrial cysts are usually bilateral, rarely larger than a lemon or orange, cystic, and ﬁrmly ﬁxed behind the uterus.

At laparotomy, endometriosis may be found incidentally to other pelvic lesions, particularly uterine ﬁbroids and uterine retrodisplacements. Peritoneal implants may be seen as small, scattered, scarred puckerings or irregular, brown (“tobacco-stained”) areas anywhere on the pelvic peritoneum. The peritoneum may be the site for atypical endometriosis, vesicles from clear, to red, to the classic dark-brown lesion. The ovarian or uterosacral ligaments may contain single or multiple discrete or conﬂuent cicatrized nodules, with partially enveloped, minute, dark-blue or brown hemorrhagic blebs. Endometriosis of the ovary may be manifested by minute surface “implants,” small hemorrhagic cysts within the cortex, or by large “chocolate” cysts, which may practically replace the substance of the ovary. In surface endometriosis, tiny red, purple, or dark-brown hemorrhagic blebs are encompassed within puckered, cicatricial tissue. Endometrial cysts (chocolate cyst) vary in size but are rarely larger than 10 cm in diameter. They are frequently bilateral. The outer surface appears irregular, puckered, and adherent. Black or brown hem- orrhagic areas may be evident. Along with its corre-sponding tube, the ovary is usually found adherent to the posterior surface of the broad ligament, uterus, lateral pelvic wall, and rectosigmoid. An attempt to free the adnexa usually results in rupture of the cyst with escape of large quantities of thick, chocolate-colored ﬂuid. The cyst wall appears thick, irregularly convo- luted, and yellow-white in color. The inner lining has a dark, hemorrhagic stain. Microscopically, typical endometrial stroma and glands may line the cyst wall. Older lesions, presumably due to repeated desquamation and pressure of retained blood, may show little evidence of endometrial tissue. The cyst may be lined by a broad zone of pseudoxanthoma cells, containing a hemoglobin derivative (hemosiderin). Hyalinization and ﬁbrosis are seen in other areas.

Therapy depends upon the age, parity, location, and extent of the lesions, severity of symptoms, the desire for children and the possibility of pregnancy, the patient’s attitude toward loss of menstrual function or premature castration, and the coexistence of other pelvic pathology such as uterine ﬁbroids.