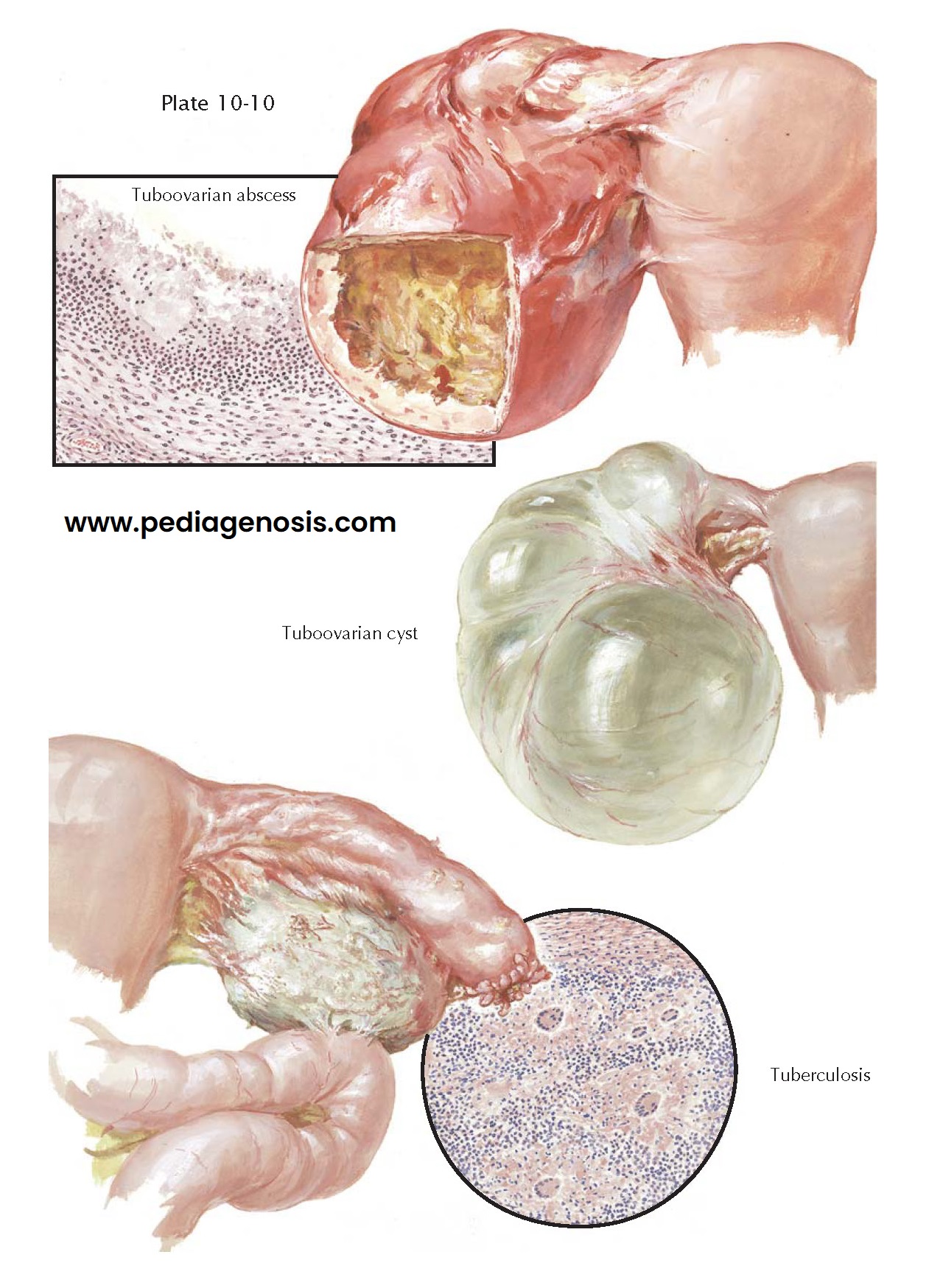 Infections of the ovaries are usually secondary, with most the result of cervical gonococcal or chlamydial infections that have ascended into the upper genital tract (pelvic inﬂammatory disease [PID]). Tubercular infections and infections in the gastrointestinal tract (particularly in association with appendicitis) also occur. Transmission may be through direct contact with infections of contiguous organs; lymphatic spread, particularly of streptococcal infections of the uterus to the ovarian hilum; and hematogenous extension from distant foci, as may occur in mumps, scarlatina, measles, diphtheria, tonsillitis, typhoid fever, and cholera.

Acute oophoritis due to surface invasion may be mild and superﬁcial, resulting in thin, ﬁbrinous periovarian adhesions. Chronic perioophoritis is evidenced in the residuals of PID, where dense, ﬁbrous adhesions bind the ovary to the tube, posterior surface of the broad ligament, and lateral pelvic wall. Microscopically, a diffuse oophoritis may show hyperemia, edema, and leukocytic inﬁltration. The presence of multiple small abscesses indicates a lymphatic invasion. The open punctum of a ruptured graaﬁan follicle or a thinly covered current hemorrhagic corpus luteum offers a favorable point of entry for contiguous infection. At times, an expanding ovarian abscess may replace the entire ovary. Fusion with the tube, or pyosalpinx, fol- lowed by a breakdown of intervening tissue, results in a tuboovarian abscess.

Streptococci and colon bacilli may secondarily infect a tuboovarian abscess of gonorrheal origin. Clinically, it is indistinguishable from a large pyosalpinx. Tubo-ovarian abscesses may gradually resolve, exacerbate intermittently, perforate locally to form a large pelvic abscess, or rupture into the rectum, bladder, vagina, or abdominal cavity. A chronic tuboovarian abscess may be relatively quiescent or asymptomatic. In the more acute state, it may give rise to low abdominal pain, nausea, vomiting, abdominal distension, evidences of pressure upon the bladder and rectum, fever, lower abdominal spasm and tenderness, leukocytosis, and a rapid sedimentation rate. Pelvic examination may reveal a ﬁxed retrodisplaced uterus and bilateral, soft, irregular, ﬁxed, tender masses laterally and behind the uterus. With subsidence of the infection and resorption, a tuboovarian cyst may result. These are large, retort-shaped, thin-walled, cystic structures, densely adherent to the pelvic peritoneum, broad ligament, and uterus. Tuboovarian abscesses must be differentiated from ovarian neoplasms with infarction, secondary infection, or rupture; appendicitis with pelvic abscess; diverticuli- tis; ovarian, tubal, or sigmoidal carcinoma; endometrio- sis; and ruptured tubal pregnancy with hematocele.

Streptococcal infections of the ovary and contiguous structures may follow postoperative or puerperal infections, instrumentation or cauterization of the cervix, insertion of a radium “tandem,” and cervical stenosis with pyometra. Parametritis and pelvic cellulitis may progress until a ﬁrm, brawny, ﬁxed, tender mass ﬁlls the posterior cul-de-sac and extends across the pelvis to the lateral pelvic walls. The ovaries are secondarily involved by lymphatic spread and contact. Large abscesses may be formed that may be drained, may perforate, resolve, and recur.

Pelvic tuberculosis is almost invariably secondary to an old or recent acid-fast infection elsewhere, particularly of the lungs. The hematogenous route ﬁrst involves the tubal endosalpinx, usually bilaterally, followed by direct invasion of the myosalpinx, perisalpinx, and pelvic peritoneum. This is often followed by perioophoritis, with penetration into the ovarian cortex. Thus, tuberculosis of the ovary is secondary to a tuberculous salpingitis by contiguity. The ovary may appear grossly normal or slightly enlarged, studded with tubercles and covered by dense adhesions. In advanced cases caseation and an ovarian abscess with thick, ragged walls may be seen, sometimes eventuating into a pelvic abscess. Microscopically, only a few tubercles or marked inﬁltration with caseation may be noted. If resolution does not occur with standard tuberculosis antibiosis, total hysterectomy and bilateral salpingo-oophorectomy offers the best chance for cure.