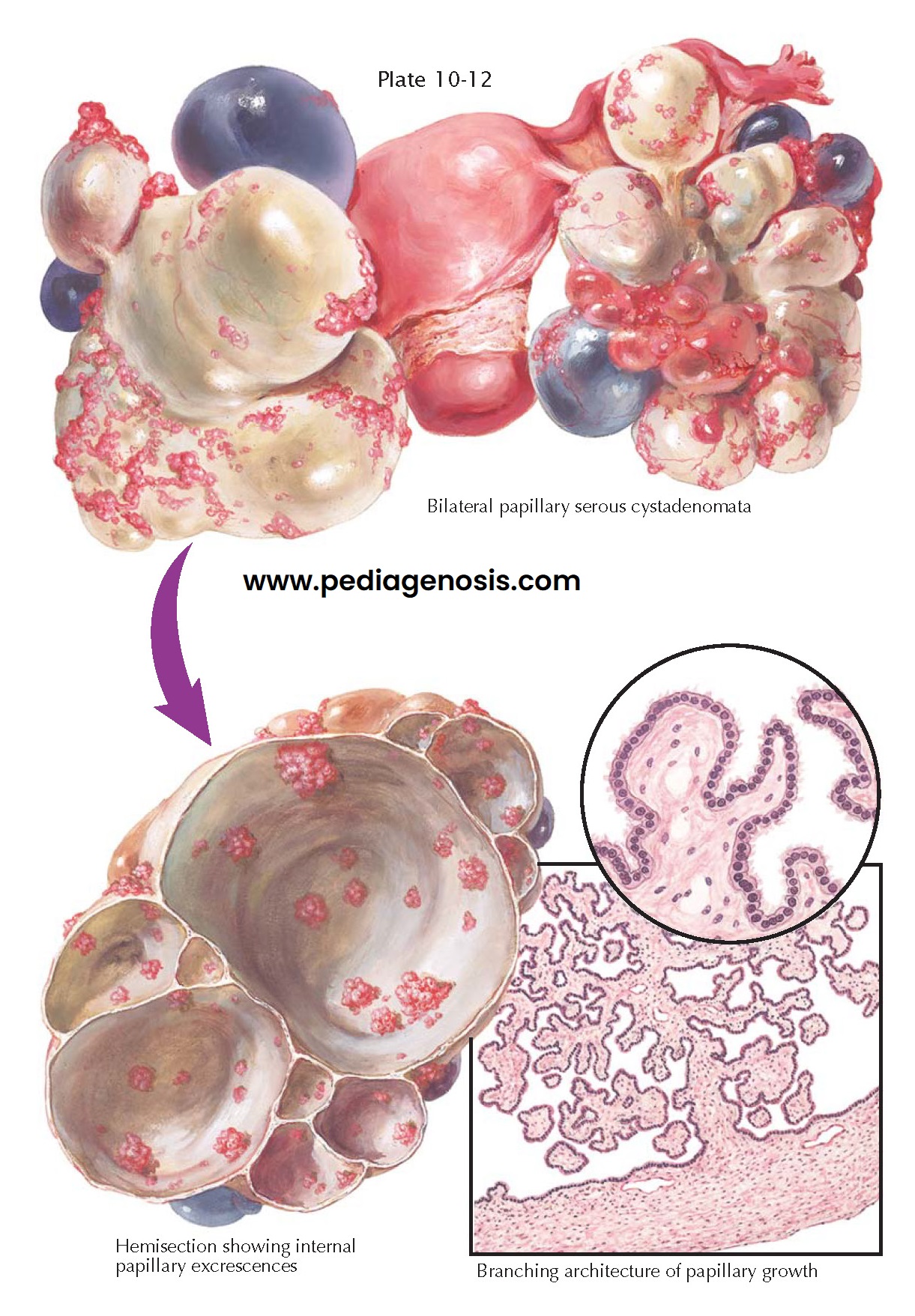 Papillary serous cystadenomas are serous cysts that manifest intra or extracystic papillary growths in addition to adenomatous proliferations. Papillary serous cystadenomas are commonly multilocular, spherical, and lobulated. When papillations are conﬁned to the inner wall, the cyst is apt to be unilateral and may attain a large size. When external and internal papillary masses are present, they are usually smaller and more frequently bilateral. Aside from their papillary structures, these neoplasms grossly resemble the serous cystadenomas. They are irregular in contour, with variations in the size of the component cysts, the color of the serous contents, and the thickness and completeness of the intervening septa. The papillary excrescences are the most striking feature of these tumors. They may involve isolated segments of one or more locules or the entire inner surface. They may be ﬂat, warty, nodular, or villous. Fine, pedunculated, branching papillae may coalesce and form large cauliﬂower masses. Increased congestion may impart a red or raspberry color. Edema and myxomatous changes may induce a dead-white, swollen, translucent appearance. Necrosis and fatty changes may result in a grayish-yellow hue. Calcium deposits in the form of psammoma bodies render the papillations sandy to the touch.

On microscopic examination the cyst wall is composed of ﬁbrous tissue of varying thickness and density, with an inner lining of “serous” epithelium. The latter is one cell in thickness, though tangential sections may give the appearance of pseudostratiﬁcation. The cells, in general, are low columnar or cuboidal, with a dark-staining central vesicular nucleus. Cilia are frequently demonstrable. Variations in cell structure, including the presence of pear-shaped and intercalary or “peg” cells, suggest a similarity to tubal epithelium. Glandlike alveolar proliferations of the lining epithelium into the cyst wall give an adenomatous appearance. At times, local squamous cell metaplasia may be seen. The adenomatous spaces, when distended with serous secretion, are transformed into cystic cavities. The papillae may present a varying architecture, including an arborescent pattern. They are composed of a central core of connective tissue covered by a single layer of “serous” epithelium. The central core may be broad or narrow, coarse or ﬁbrillar, dense or edematous. As a consequence of local degeneration, small deposits of calcium or psammoma bodies are not infrequently seen.

About two-thirds of papillary serous cystadenomas are encountered during the reproductive years (20 to 50). The cysts may be asymptomatic or may give rise to local discomfort, enlargement of the abdomen, or pressure symptoms, with urinary or bowel dysfunction. A twisted pedicle with infarction is not uncommon. Rupture of the cyst may occur following trauma or torsion. Pelvic examination may reveal moderate-sized, irregular, movable ovarian neoplasms. Peritoneal surface implantations, associated with papillary cystadenomas, may regress spontaneously following removal of the ovarian neoplasms. On the other hand, recurrences have been described after extirpation of an apparently benign papillary serous cystadenoma. Prognosis must be guarded, because the tumor may be grossly and histologically benign but may manifest malignant tendencies. For this reason, a careful selection of representative areas and multiple microscopic sections is always indicated with papillary serous cystadenomas. In general, the presence of external papillations or peritoneal implants is considered evidence of malignancy unless proved otherwise. Ascites is not infrequent. At times, a pleural effusion may be associated with a papillary cystadenoma, as in Meigs syndrome.

Therapy may depend upon a number of factors. A conservative attitude may be adopted in the presence of youth, slow growth, unilateral involvement, intact capsule, and sparse papillae. A total hysterectomy and bilateral salpingo-oophorectomy are indicated in women in their 40s or in the presence of bilateral involvement, peritoneal implants, external excrescences, and ascites. Aspiration or rupture of the cyst should be avoided to prevent dissemination and implantation.