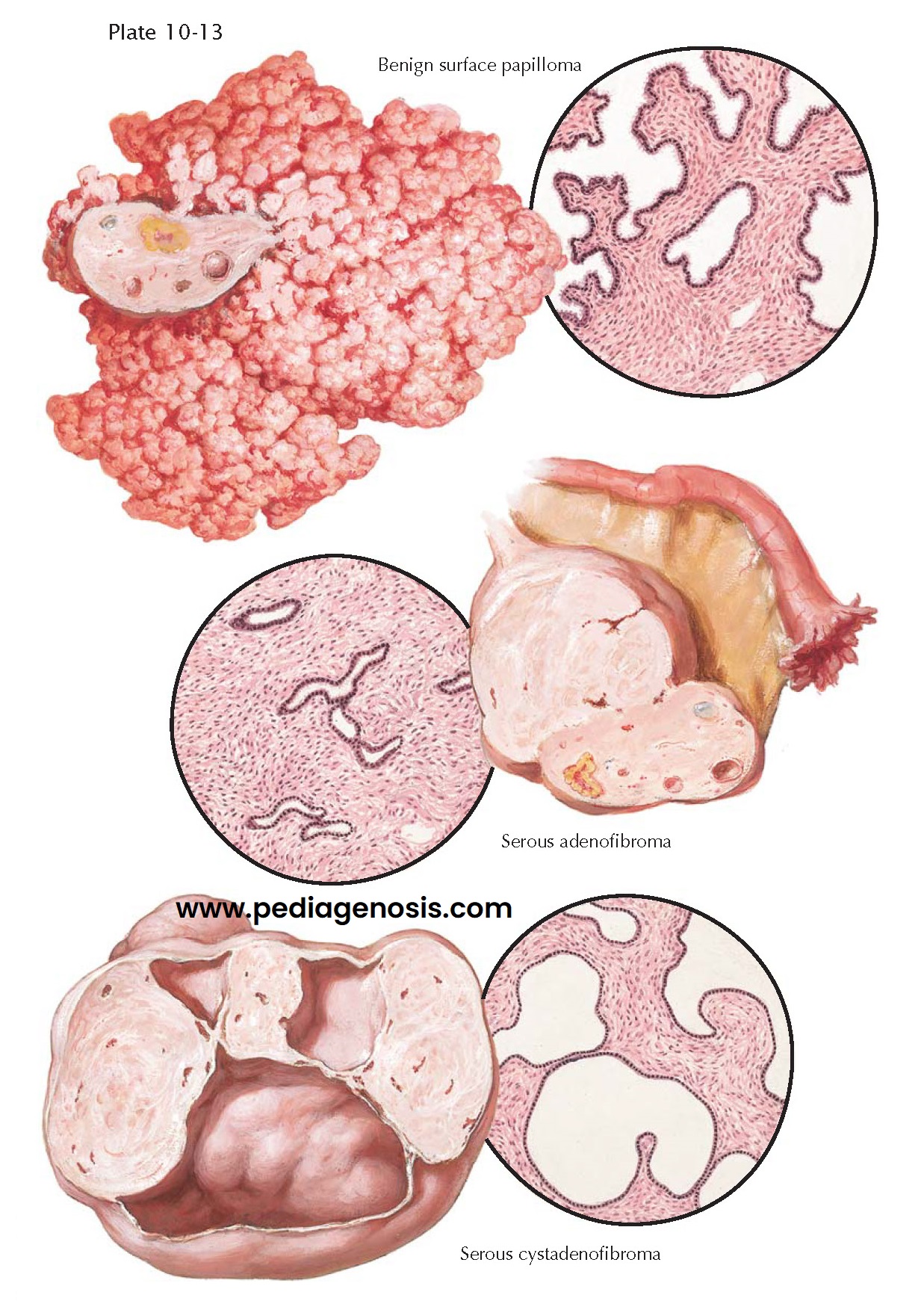 The serous epithelial tumors of the ovary include three subgroups in which the ﬁbromatous elements over-shadow the proliferation of “serous” epithelium. Although histogenetically similar, they present gross and microscopic differences. These variants may be classiﬁed as surface papillomas, adenoﬁbromas, and cystadenoﬁbromas. Adenoﬁbromas are most commonly found as ovarian masses but may also occur in the cervix or uterine body. Adenoﬁbromas are also closely related to cystadenoﬁbromas that contain cystic areas but still contain more than 25% ﬁbrous connective tissue.

Surface papillomas are solid ﬁbromatous papillomas covered by “serous” epithelium. They may appear as a localized accumulation of minute, ﬁne, warty excres-cences; as conspicuous, multiple, ﬁngerlike, polypoid projections; or as large cauliﬂower growths, completely enveloping the ovary and ﬁlling the pelvis. Microscopi- cally, the papillae are composed of ﬁbrous tissue with varying degrees of cellularity and hyalinization, covered by a single layer of mesothelial or cuboidal cells. Surface papillomas may occur singly or in conjunction with other forms of serous epithelial tumors. They are benign and, usually, of no clinical signiﬁcance. However, the marked proliferative activity, evidenced in large exophytic papillary growths, makes a gross decision as to their benign or malignant character most difﬁcult.

Serous adenoﬁbromas of the ovary are benign, ﬁbromatous tumors containing serous adenomatous elements. They represent a variation of serous epithelial neoplasms. They have also been referred to as ﬁbroadenomas, ﬁbromas with inclusion cysts, cystic ﬁbromas, serous cystadenomas, solid adenomas, and adenocystic ovarian ﬁbromas. The lesion is rare and occurs most often after the age of 40 years. The tumors are usually encountered accidentally on pelvic examination or as incidental ﬁndings at laparotomy. Occasionally, if suf-ﬁciently large, they may give rise to local discomfort or pressure symptoms. Grossly, these neoplasms are solid, slightly irregular in contour, smooth-surfaced, and ﬁrm. On section, they are composed of gray-white, compact, interlacing bundles of connective tissue. Minute cystic spaces may be visible. The tumors vary considerably in size. They may be unilateral or bilateral (15%), single or multiple. An early lesion may appear as a tiny, ﬁrm, white, ﬂat, oval, or serrated structure on the surface of the ovary or as a small nodule in the ovarian cortex. Growing, the tumor may replace most of the ovary. Grossly, the serous cystadenoﬁbroma resembles the Brenner tumor, ﬁbroma, ﬁbromyoma, or theca cell tumor. Histologically, the neoplasm is composed of a dense connective tissue matrix in which are embedded numerous small cystic spaces. The latter are lined by compact, single-layered, cuboidal or low-columnar, often ciliated epithelium. The ﬁbromatous tissue is predominant. It manifests a whorl-like arrangement of spindle cells, with varying degrees of hyalinization. The epithelial glands are round, oval, irregular, or slitlike. Psammoma bodies are frequently found.

Serous adenoﬁbroma and cystadenoﬁbroma are benign. Malignancy has not been observed, despite the fact that such potentialities would be expected to be similar to those of serous cystadenomas. Therapy consists of surgical excision. This is in contrast to pure serous tumors, which are more likely to be found with poorer differentiation. Papillary surface carcinomas of the ovary are most likely to be serous in type. A frozen-section histologic evaluation should be considered for any ovarian mass that appears suspicious for malignancy.