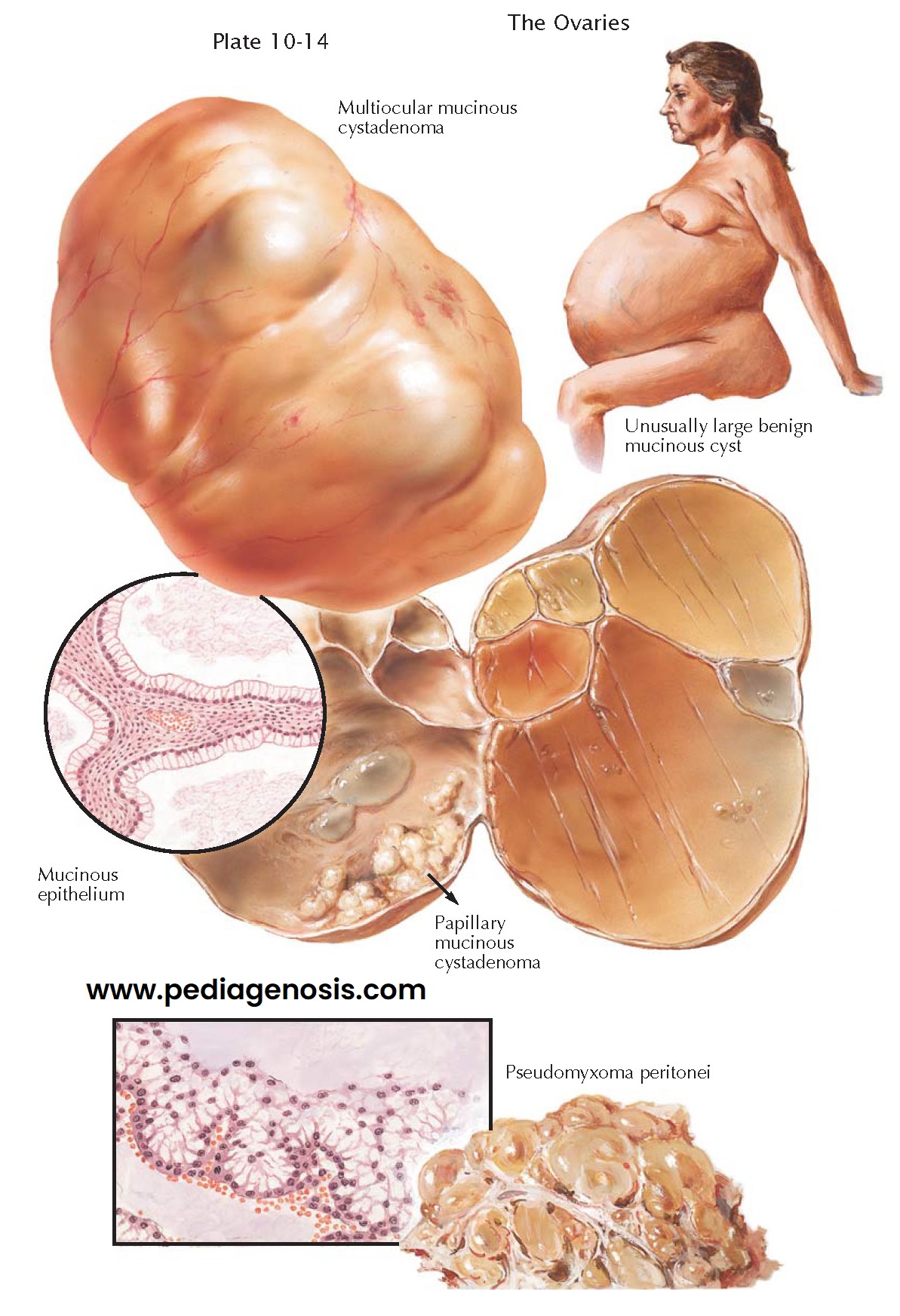 Mucinous (pseudomucinous) cystadenomas are cystic neoplasms of the ovary in which the lining epithelium is mucus-producing. They are usually unilateral, multilocular, lobulated, smooth-surfaced, tensely cystic, pedunculated, and benign. They represent the most common type of ovarian cyst, occurring with slightly greater frequency than the serous cystadenomas. Usually, they are encountered during the reproductive years (20 to 50 years), rarely before puberty or after the menopause. In contrast to serous epithelial growths, they are less likely to be bilateral (10%) or papillary (10%) and are rarely malignant (5% to 15%). Mucinous cystadenomas may be minute in size or may ﬁll the abdomen: mammoth ovarian cysts are apt to be of the mucinous type. Generally, they are recognized and are removed before reaching a diameter of 15 to 30 cm. Torsion of the pedicle is common (20%). Ascites is rare but may occur. Hydrothorax and hydroperitoneum, as encountered in Meigs syndrome, have been described. Intracystic hemorrhage, secondary suppuration, and spontaneous rupture are rare. Penetration of the capsule, with implantation and growth of mucinous epithelium in the peritoneal cavity, may cause pseudomyxoma peritonei. The rate of growth is generally slow. Rupture of a cyst by trocar, aspiration, or handling should be avoided. Unilateral removal of ovary and tube is the therapy of choice, at which time the specimen must be carefully examined for evidences of localized, ﬁrm inﬁltrations in the cyst wall.

Grossly, the outer surface of mucinous cysts appears smooth, lobulated, glistening, and grayish white or whitish blue in color. The cut surface may present a variety of architectural patterns, including a unilocular cyst with internal, sickle-shaped ridges representing the remnants of previous interlocular septa; a multilocular, semisolid neoplasm, with chambers of varying size and honeycombed cystic aggregates projecting into the lumen; or a more solid tumor composed of numer- ous minute compartments that present a spongelike appearance. Internal papillary excrescences are uncommon (10%). The cyst wall is ﬁbrous and of varying thickness. Septa are ﬁrm, ﬁbrous or adenomatous, complete or incomplete. The characteristic ﬂuid is mucoid, viscid, and transparent or cloudy. As a result of bleeding, the ﬂuid contents may assume a red, tan, brown, or black color.

Microscopically, the connective tissue capsule is composed of an outer layer of dense, ﬁbrous tissue and an inner zone, which is looser and more cellular. Evidences of localized degeneration may be noted, including edema, inﬂammation, necrosis, fatty acid deposits, and calciﬁcation. The dividing septa are extensions from the inner zone of connective tissue. A well-differentiated, single-layered epithelium lines the cyst walls and trabeculae. It invaginates into the connective tissue stroma to give an adenomatous appearance. The epithelial lining is composed of tall columnar cells, with deeply staining basal nuclei and abundant acidophilic, ﬁnely granular cytoplasms. Actively secreting goblet cells are scattered irregularly between the columnar cells.

Pseudomyxoma peritonei refers to the secondary implantation on the peritoneum of mucinous tissue, with subsequent local invasion, proliferation, and overproduction of thick, gelatinous, mucinous material, which may ﬁll the pelvis, abdomen, and subphrenic spaces. Pseudomyxoma peritonei may follow rupture of a mucinous cystadenoma of the ovary or a mucocele of the appendix. Recent histologic studies suggest that in the majority of patients the appendix is the primary tumor source. In rare cases, metaplasia by the cells of the peritoneal surface may account for this tumor.

Clinically, pseudomyxoma peritonei may give rise to a progressive enlargement of the abdomen, evidences of increased abdominal pressure, interference with bladder and bowel function, and cachexia. The condition is progressive and, though histologically benign, may cause a fatal outcome owing to mechanical interference. The rate of growth may be rap d, or the progress may be drawn out over many years.