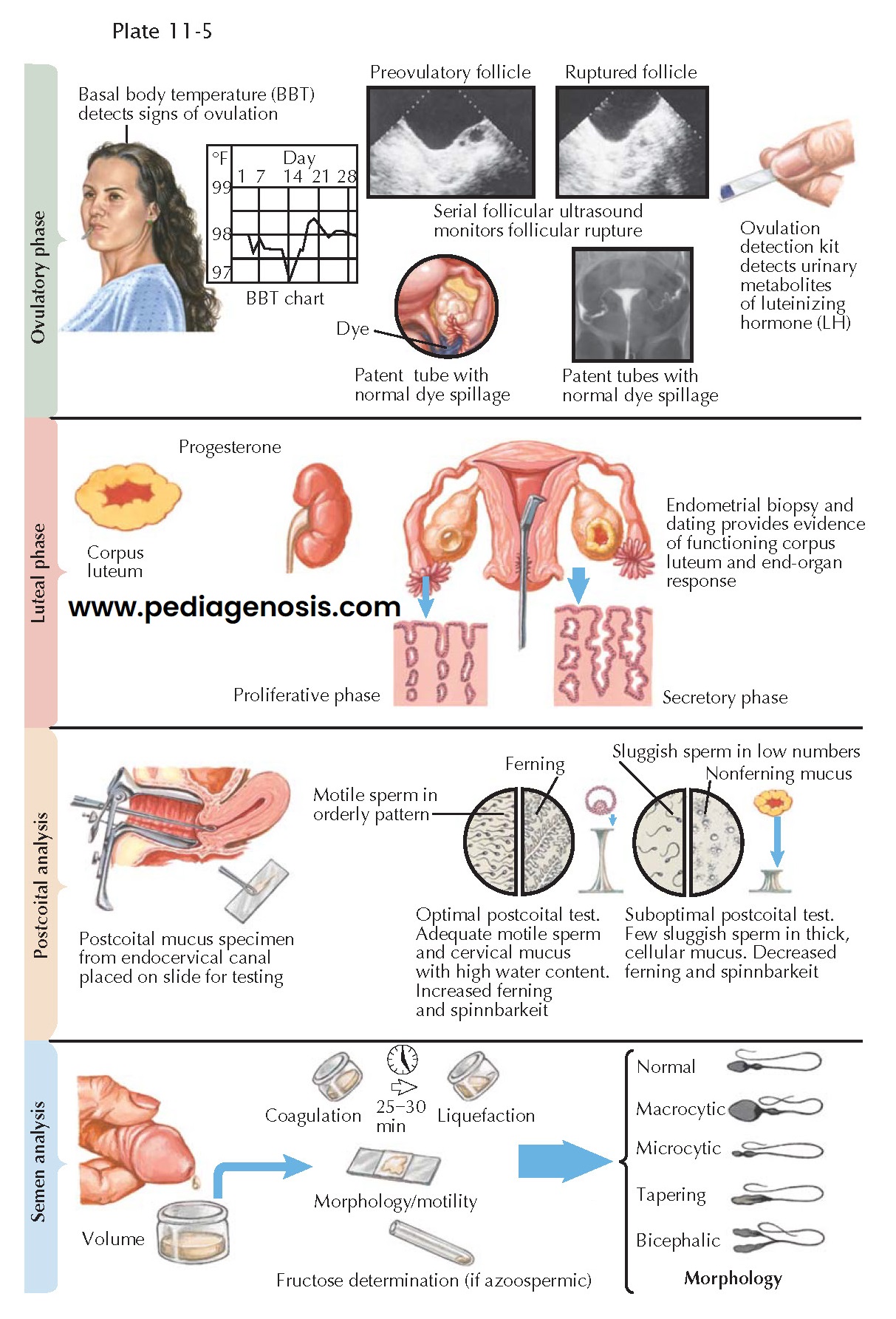 Before any counseling or intervention for an infertile couple, the impediment to conception must be identiﬁed. Because 50% to 60% of identiﬁable causes of infertility are attributable to the female partner, much of the evaluation is focused on the woman. Beyond providing gametes to the union, the woman must also provide patent conduits to allow the gametes to meet and to transport the fertilized egg and a readied chamber for the embryo to implant, develop, and grow to viability.

In women, the most common cause of infertility (20% to 30%) is damage to the fallopian tubes interfering with proper transport of sperm or the fertilized ovum. Half of all women found to have tubal factor infertility lack a history of antecedent infections or surgery, supporting the need to evaluate tubal patency in patients regardless of their past history. Hysterosal-pingography, or alternately the ﬂushing of the fallopian tubes with sterile saline colored with dye at the time of laparoscopy, has replaced less precise archaic methods such as the Rubin test in which carbon dioxide was used to assess tubal patency. Hysterosalpingography allows the size and shape of the uterine cavity to be assessed (important if recurrent pregnancy loss is an issue) and laparoscopy allows a more direct view of the fallopian tubes, ovaries, and surrounding areas (if pelvic adhesive disease or endometriosis are possibilities). Each is invasive to a degree and each offers advantages and disadvantages over the other, making the choice of procedure based on the patient’s history and other clinical factors. The second most common cause for female infertility (10% to 15%) is a disorder of ovulation. Failure of ovulation can arise due to central or peripheral sources. If the ovary is incapable of responding to the hormonal signals coming from the pituitary (as in gonadal dysgenesis or following alkylating chemotherapy), ovulation cannot take place. Similarly, if the hypothalamic–pituitary–ovarian axis has been disrupted, the appropriate hormonal signaling may not be generated to result in the maturation and release of an oocyte. The use of basal body temperature measurements to detect the increase in temperature due to the postovulation surge in progestins has generally been replaced by the use of urinary LH surge monitoring kits even though an LH surge does not guarantee ovulation. An endometrial biopsy obtained after presumed ovulation can supply evidence of ovulation, but this method of documenting ovulation has also been replaced by less-invasive measures. Similarly, vaginal cytology as a marker of hormonal status is no longer used in the evaluation of infertility. When pituitary or ovarian fail-ures are considered possible, direct measurement of serum FSH and/or LH may be made to assess their status.

Although cervical factors are generally credited with about 5% of causes of infertility, the ability to bypass the effects of hostile or inadequate cervical mucus by assisted reproductive technologies has meant a decline in the importance of cervical mucus testing for infertility assessment. Although the cervical mucus can be evaluated for signs of ovulation (ferning or spinn-barkeit), like endometrial biopsy for the same purpose, these have been displaced by other methods.

Laparoscopy for the evaluation of tubal patency and the possibility of conditions such as endometriosis or pelvic adhesive disease can play an important role in the evaluation of the infertile. Hysteroscopy to evaluate the endometrial cavity can be useful, especially in couples in whom recurrent pregnancy loss has played a role in their childlessness. Chromosomal evaluations of infertile couples are seldom warranted except for selected infertility cases where a high degree of suspicion exists.