THE OOCYTE AND OVULATION

THE OOCYTE AND OVULATION

The completion of the ﬁnal steps of meiosis I and the release of the oocyte from the parenchyma of the ovary constitute the process of ovulation. Through a process that takes approximately 375 days (13 menstrual cycles) a number of dormant, undeveloped primordial follicles begin to grow. These develop in a complex process of bidirectional hormonal feedback that results in the selection of one (or occasionally more than one) dominant follicle. (Advancing maternal age is associated with a higher frequency of multiple egg release with ovulation.) The preovulatory follicle (mature graaﬁan follicle) contains an oocyte arrested in prophase of meiosis 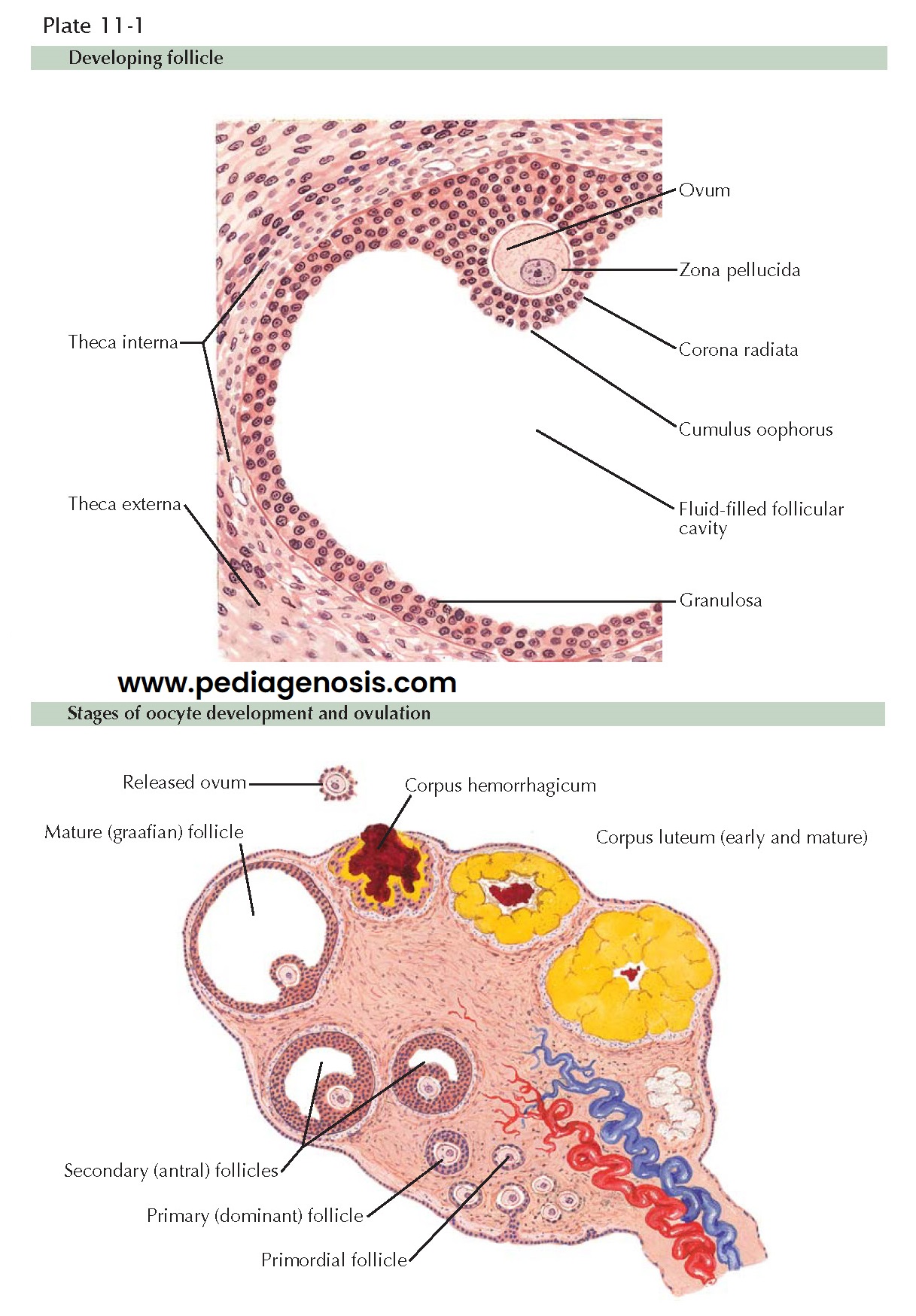 I. This is surrounded by a layer (corona radiata) of granulosa cells, a layer of mural granulosa cells, a protective basal lamina, and a network of blood-carrying capillary vessels sandwiched between a layer of theca interna and theca externa cells. A large collection of ﬂuid, occupying the antrum, predominates in the follicle. These growing follicles are surrounded by granulosa cells, which engage in bidirectional messaging with the theca cells and the oocyte to facilitate follicular function. A dominant follicle is established by day 5 to 7 of the cycle.

Just prior to ovulation, the oocyte resumes meiosis, approaching completion of its reduction division. (Meiosis will not be completed until after a sperm has entered the egg and the second polar body is expelled.) During the preovulation phase, the granulosa cells of the follicle enlarge and acquire lipid inclusions, and the theca layer develops a rich vascular supply while the cells undergo vacuolization. There is also a transfer of inhibin production to LH control, ensuring continued function as FSH levels drop.

Ovulation occurs because of a rapid increase in the follicular ﬂuid and the direct action of proteolytic enzymes and prostaglandins. Follicular ﬂuid accumulates gradually as the follicle grows but rapidly increases to 1 to 3 mL in response to the LH surge and a change in follicular wall elasticity. In addition, the theca cells surrounding the follicle begin to erode through the overlying epithelial covering of the ovary with the help of proteases, collagenase, plasmin, and prostaglandins E2, F2, and other eicosanoids. These weaken the capsule and stimulate smooth muscle contractions in the cortex of the ovary, facilitating rupture of the follicle and the expulsion of the egg. The LH surge, by itself, is inadequate to induce ovulation in a follicle that has not undergone sufﬁcient maturation. Once the oocyte has been released from the follicle, it is picked up by the ﬁmbria of the fallopian tube for transport to the uterus, whether it becomes fertilized or not.

The remnant of the follicle, with its LH sensitized (luteinized) granulosa cells, is the corpus luteum, and is responsible for continued hormone production. There is a proliferation of the luteinized granulosa cells to ﬁll the cavity. The corpus luteum reaches maximum production of estrogen and progesterone at about 10 days after ovulation. If conception has not occurred, the corpus luteum begins to regress, ending its function by about 14 to 15 days after ovulation. The exact reason for this involution is unknown, but only rescue by human chorionic gonadotropin (hCG) can prevent its occurrence.

It is the continued production of estrogen, progesterone, and inhibin that suppresses the hypothalamus, decreasing its gonadotropin-releasing hormone production. This, in turn, decreases the release of FSH and LH from the pituitary, further preventing other follicles from maturing and releasing their eggs. This self-limiting process generally ensures that there is only one egg, which can be fertilized each month. Failure of this system to inhibit additional follicles, or the near simultaneous rupture of more than one follicle, can set the stage for fraternal twinning.