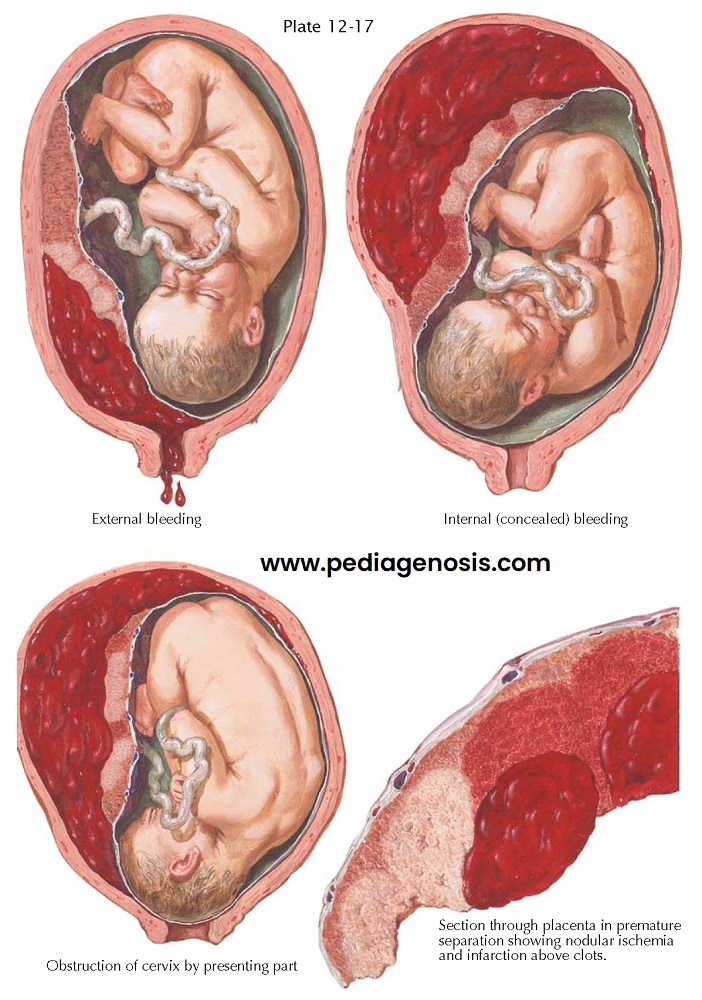 The term abruptio placentae and its synonymous “premature separation of the normally implanted placenta” refer to separation of the placenta from its uterine attachment after the twentieth week of gestation. Prior to this period, detachment of the placenta is associated with abortion. Abruptio placentae is one of the major causes of hemorrhage in the last trimester of pregnancy. The bleeding from placental detachment may be external or internal. In the case of external bleeding, the blood dissects and insinuates itself between the placenta or its membranes and the uterine wall, escaping through the cervix and the vaginal canal. In the internal form the bleeding remains concealed between the placenta and the uterine wall because of incomplete detachment of the placenta. The lower pole of the placenta frequently remains adherent to the uterine wall. When the entire placenta, or at least its lower pole, is detached, external bleeding is usually present. Another cause of concealed hemorrhage, even in the presence of complete separation, is the obstruction of the cervix by the presenting part, particularly in cephalic presentation. All these factors may delay the diagnosis and thereby lead to serious consequences. Abruptio placentae is responsible for approximately 10% of all third-trimester fetal demises.

The degree of separation of the placenta may assume various proportions, from small areas of separation to detachment of the entire placenta. Hence, the clinical manifestations may vary widely, according to the severity of the case and the amount of bleeding. Many placentas with small areas of detachment may elude detection because of no or minimal clinical symptoms. Although the primary cause of abruptio placentae is not fully understood, it is generally agreed that many cases are associated with preeclampsia or with other types of hypertensive diseases concomitant with pregnancy. It is thought that liberation of excessive amounts of thromboplastin and deﬁbrination of the patient’s blood are intimately connected with the etiology of separation of the placenta. Other risk factors include a prior abruption (15% chance if one prior episode, 20% to 25% for two or more prior events), smoking, multiparity, alcohol abuse, cocaine use, polyhydramnios, maternal hypertension, premature rupture of the membranes, external trauma, uterine leiomyomata, increased age or parity, and multiple gestation.

The process leading to abruptio placentae begins usually with a small hematoma between the decidua and the chorionic villi. This hematoma, in turn, increases the possibility of more bleeding and more separation. In some instances the process is initiated by extensive decidual bleeding that separates the placenta entirely in a short period of time. The uterus is unable to contract and stop the bleeding, as it does after delivery, because it still contains the products of conception. The clinical manifestations of abruptio placentae are usually quite characteristic, so that the condition can be differentiated from other causes of hemorrhage in the third tri- mester. Sudden colic-like abdominal pain followed by extreme rigidity of the uterus, which presents a board- like consistency as a result of spasmodic contractions without any intermittent relaxation, is quite characteristic. If the placenta is completely or at least 50% separated, fetal heart activity may be lost. Vaginal bleeding may or may not be present. Patients with extensive bleeding are often in severe shock, but the degree of shock is not proportional to the amount of bleeding. Occasionally, it is possible to suspect blood accumulation inside the uterus, when, despite its tetanic condition, a gradual uterine enlarging is observed. Dis-seminated intravascular coagulation may accompany a severe abruption.

The management of abruptio placentae depends upon the individual case. If fetal heart activity is present but compromised, immediate (emergent) cesarean delivery may be life saving for both mother and baby. Lesser degrees of placental separation may be managed conservatively. If the cervix is soft, effaced, and somewhat dilated, rupture of the membranes may be ufﬁcient to initiate labor and delivery of the baby.