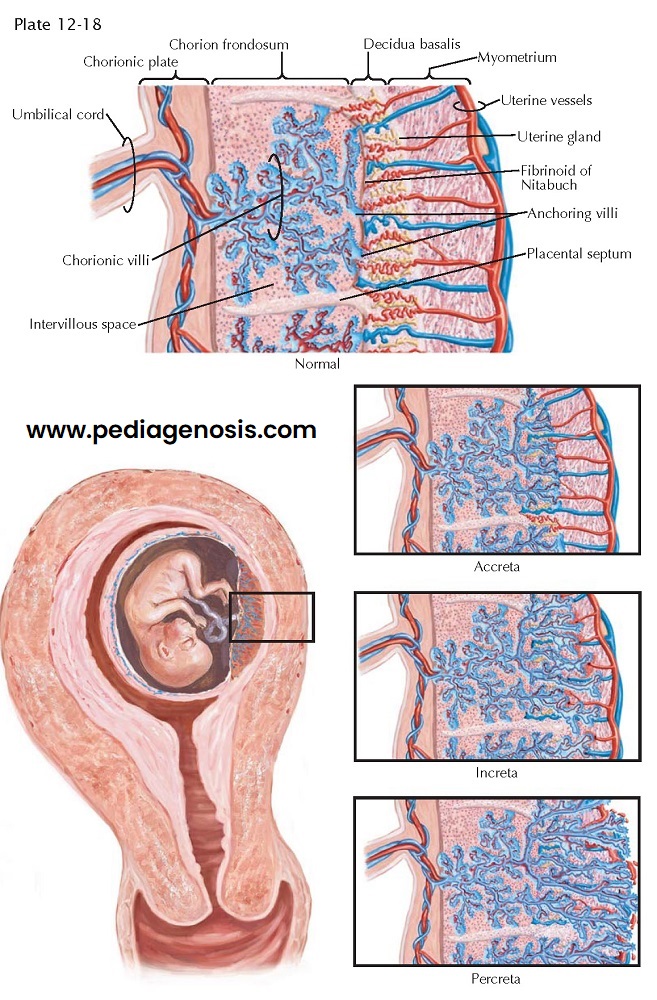 Failure of the normal process of decidua formation results in a placental implantation in which the villi adhere directly to (accreta, 78%), invade into (increta, 17%), or through (percreta, 5%) the myometrium. One portion (partial) or all (total) of the placenta may be involved in this abnormality. The frequency of this abnormality is difﬁcult to assess and estimates vary from 1 in 1667 to 1 in 70,000 pregnancies, with most authors placing the estimate closer to 1 in 7000 births. Accreta appears to be increasing concomitant with the increasing cesarean section rate. Most patients go to term with normal fetal development.

Placenta accreta (and other variants) occurs when there is abnormal decidua formation at the time of placental implantation as a result of imperfect development of the ﬁbrinoid (Nitabuch) layer. This can also take place because of an abnormal site of placental implantation such as placenta previa, which is associated with 64% of placenta accretas, and/or uterine scars where normal decidual development may not occur. The risk of an implantation abnormality with a placenta previa without previous uterine surgery is about 5% but increases with a history of previous surgery (to 15% to 70% of cases). Previous cesarean delivery, multiparity (1 of 500,000 for parity 3, 1 of 2500 for parity >6), older pregnant women, previous uterine curettage, previous uterine sepsis, previous manual removal of the placenta, leiomyomata, uterine malformation, prior abortion, and endometrial ablation all increase the risk of implantation abnormalities.

Ultrasonography has been used to make the diagnosis before labor, but a low-lying placenta noted in studies performed at less than 30 weeks may “migrate,” leaving the cervix free at term in up to 90% of normal cases. Patients at high risk may be studied by ultra-sonography in an attempt to identify the absence of the subplacental hypoechoic zone or the presence of lacunar blood ﬂow patterns. If present, plans for autologous blood donation and elective cesarean hysterectomy may be made. The absence of these ﬁndings does not rule out this possibility.

Final diagnosis of this type of placental abnormality must be established histologically with the demonstration of the absence of the decidua basalis (replaced by loose connective tissue). In some cases, the decidua parietalis may be normal or absent and the villi may be separated from the myometrial cells by a layer of ﬁbrin.

If a placenta accreta, increta, or percreta is suspected, aggressive ﬂuid and blood support may be necessary. Oxytocin or other uterotonic agents should be used to promote uterine contractions after placental delivery (if accomplished). Life-threatening hemorrhage may occur; maternal mortality of 2% to 6% has been reported for treatment by hysterectomy and up to 30% for conservative management. Coagulopathy secondary to blood loss and replacement is common. Spontaneous rupture of the uterus before labor has been reported, and rupture of the uterus or inversion may occur during attempts to remove the placenta.

Most patients will require hysterectomy. If the invasion of the myometrium is incomplete and the bladder is spared, conservative management by uterine packing may be possible. Any time the diagnosis is considered, preparations for hysterectomy, including anesthesia, instruments, and adequate blood, should be ready before any attempt is made to free the placenta.