Alexandre Couvelaire (1873-1948) described a pathologic condition that he called uteroplacental apoplexy, but which is better known as Couvelaire uterus. It is usually associated with premature separation of the placenta. The uterus, and occasionally the tubes and ovaries, becomes bluish or purplish in color and may resemble an ovarian cyst with a twisted pedicle. Occasionally, bloody ﬂuid is found in the broad ligament and even in the peritoneal cavity. In some cases, the uterus is unable to contract and remains atonic even after being emptied vaginally or by cesarean section. Hysterectomy is often necessary in order to check the continuous bleeding from these atonic uteri. 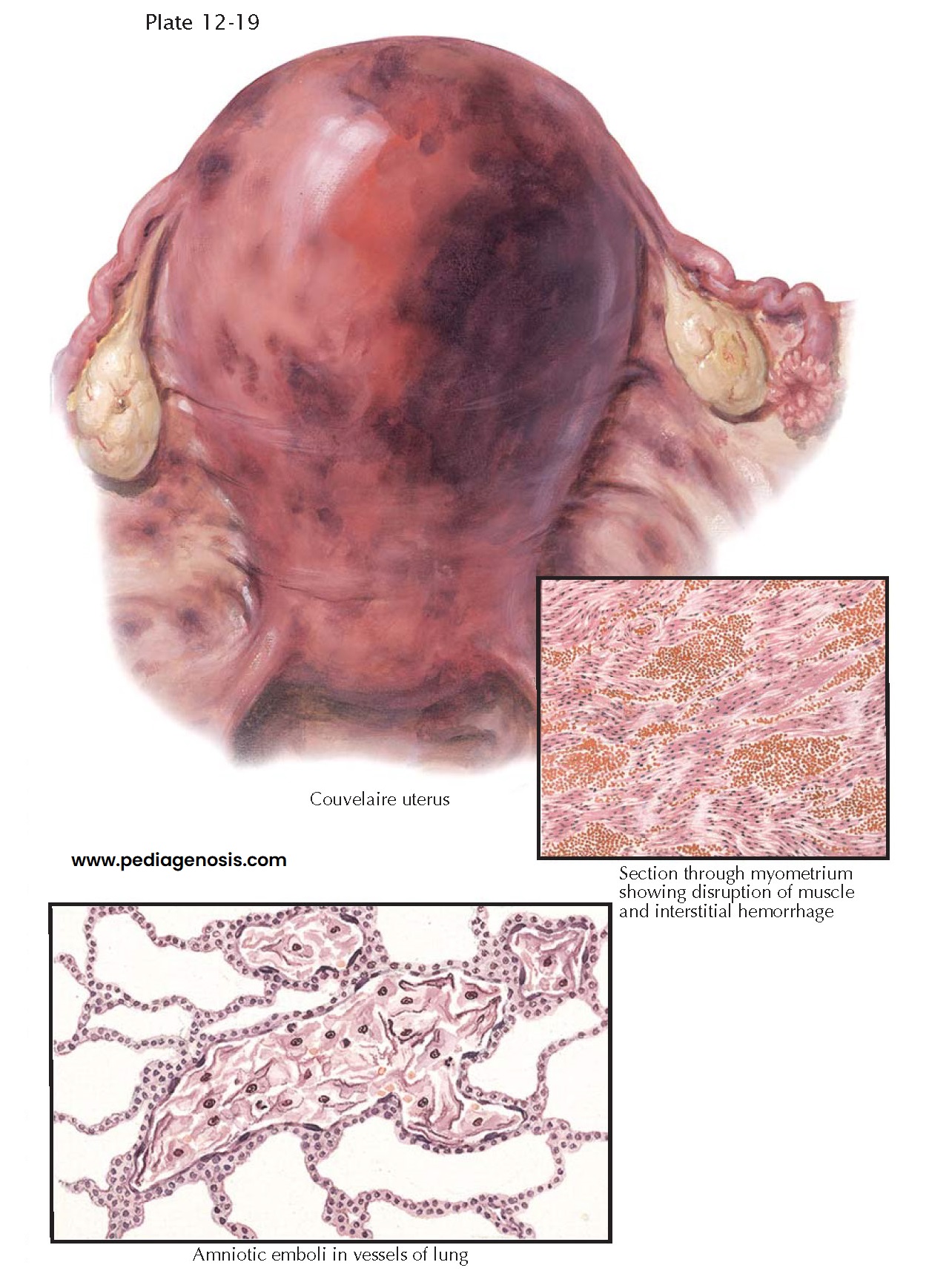 The real cause of this condition is not well under-stood, except for the fact that it is usually associated with the severest form of abruptio placentae, particularly when the hemorrhage remains concealed. Because of the collection of blood behind the placenta, some authors believe that the blood inﬁltrates between the muscular ﬁbers of the uterus, reaches the peritoneal surface, and eventually seeps into the peritoneal cavity. The intramuscular hemorrhage dissociates the muscular ﬁbers and, probably through a toxic process, these ﬁbers lose their contractile properties. Similar hemorrhage can be seen in the decidua overlying the muscular area that is inﬁltrated with blood. It has also been believed that the process is associated with consumption of clotting factors, frequently observed in cases of placental separation. The unclotted blood from the oozing area of placental implantation may inﬁltrate the surrounding decidua and uterine muscle, giving rise to the ecchymotic areas seen in Couvelaire uterus.

Maternal pulmonary embolism by amniotic ﬂuid is a rare but frequently fatal complication of labor in which it has been hypothesized that amniotic ﬂuid containing fetal squamous cells and hair enters the maternal vascular system and becomes lodged in the pulmonary vascular bed. Mechanical obstruction and anaphylaxis combine to produce an often fatal clinical course. The term anaphylactoid syndrome of pregnancy has been suggested but has not received wide acceptance. Clinically, the condition occurs more frequently in multiparas who develop tetanic contractions of the uterus after rupture of the membranes. The symptoms are usually observed near the end of the second stage and consist of dyspnea, cyanosis, and peripheral circulatory failure. Death frequently follows within a few hours. Although the condition is rare (1 in 30,000 deliveries), it is one of the most common causes of maternal mortality in the United States and other developed countries.

The etiology and pathogenesis of this process are obscure. It is thought that the particulate matter of the amniotic ﬂuid is forced into the venous channels of the uterus by powerful uterine contractions. Tears in the fetal membranes or placenta, separation of the placenta and open sinuses from placenta previa, and uterine rupture are cited as contributing causes that favor the dissemination of the amniotic ﬂuid. With intravenous injection of human amniotic ﬂuid and meconium into animals, the condition has been reproduced experimentally.

Although the condition can be suspected clinically, microscopic examination of the lung is essential for accurate diagnosis. Fetal ectodermal sloughed cells, vernix caseosa, meconium, and lanugo hair can usually be seen in the pulmonary small arteries, arterioles, and capillaries of these patients. Pulmonary infarction does not, as a rule, develop. Inﬁltration of polymorphonuclear leukocytes can be seen surrounding the embolic area.

Management consists of aggressive airway control and cardiovascular resuscitation (including myocardial support, inotropic agents and ﬂuids, and high-concentration oxygen therapy). The use of vasopressors has been reported to be successful. Correction and support for clotting defects (blood and platelets, fresh-frozen plasma, and cryoprecipitate as indicated) may be necessary. In women who suffer cardiac arrest before delivery, consideration should be given to perimortem cesarean delivery to improve newborn outcome. In those who have not suffered arrest, maternal considerations generally take precedence.