NODULAR LESIONS OF PLACENTA OTHER THAN TRUE INFARCTS

NODULAR LESIONS OF PLACENTA OTHER THAN TRUE INFARCTS 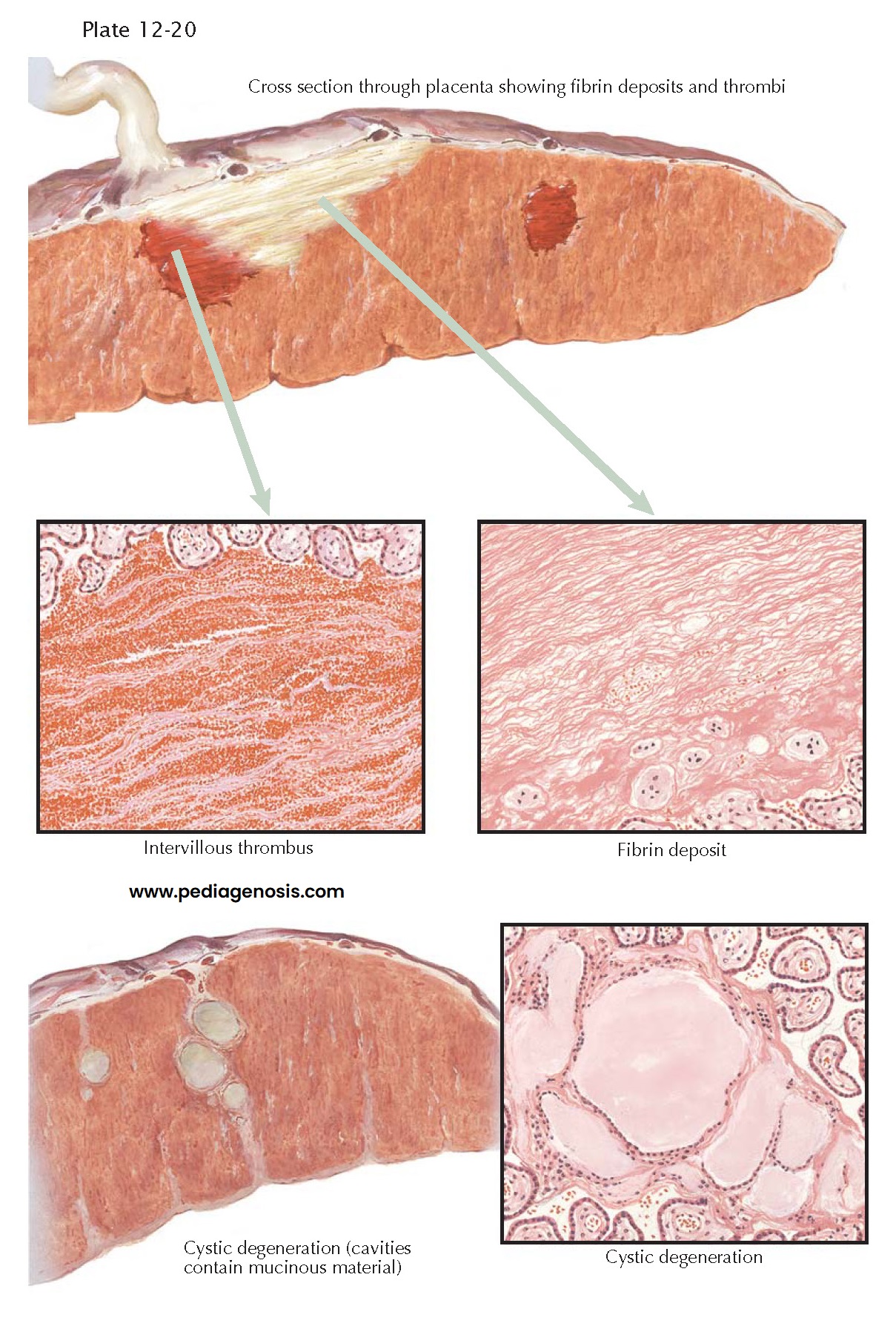 Although various kinds of nodules are found frequently in placentas at term, true infarcts are uncommon except in cases of preeclampsia or hypertension. Of the various placental nodules that can be differentiated from infarcts, the most common one is seen on the fetal aspect of the placenta. It is a ﬁrm, white mass, variable in size, which in cross sections appears as a wedge- shaped, ﬁnely laminated, white or yellowish nodule just beneath the chorionic plate, to which it is usually attached. Frequently, a fresh blood clot appears at its periphery. This lesion, often multiple, has long been erroneously called a “white infarct.” It may be found in other positions but with less frequency than beneath the chorionic plate. Microscopically, it consists of ﬁne laminations of ﬁbrin laid down parallel to the chorionic plate. Erythrocytes enmeshed in the ﬁbrin network present various degrees of hemolysis. Often a few entrapped chorionic villi appear ischemic, but the sparsity of necrotic villi sharply differentiates this lesion from a true infarct. Fibrin deposits in placentas have no known clinical signiﬁcance, but it is important to differentiate them from true infarcts.

Another common nodule that may appear anywhere in the placenta is composed of a dark-red blood clot. Microscopically, intraplacental clots may be divided into two main categories—thrombi and hematomas. In obstetric literature, both have been called “red infarcts” and “hematomas” at various times. A thrombus is an intravascular clot formed in the presence of circulating blood. It is built up in ﬁne laminations of ﬁbrin, plate- lets, and blood cells and originates usually from a small break in the continuity of the cells lining a vascular channel, which, in the case of the placenta, is usually the intervillous space. Deposits of ﬁbrin may be remnants of incompletely absorbed thrombi formed in this manner.

The rupture of a blood vessel with hemorrhage and clotting of blood in tissues outside of the circulation results in placental hematomas. Placenta hematomas may be caused by the rupture of a fetal vessel in the umbilical cord, membranes, chorionic plate, cotyledon stalk, or within an area of infarction. The rupture of a maternal vessel within a decidual septum or in the decidual basalis can also result in a placental hematoma. Occasionally, rupture of the marginal sinus causes a large hematoma at the rim of the placenta. A hematoma may conceivably result from the rupture of a fetal vessel into the maternal circulation in the intervillous space, but this appears rare and difﬁcult to document, though small transfers of fetal red blood cells do occur with some frequency. Undoubtedly, small rifts in the trophoblastic covering of villi occur, but these are promptly sealed off by ﬁbrin deposition. When any incompatibility between the blood of the infant and that of the mother exists, fetal bleeding into the maternal circulation can lead to the production of antibodies in the maternal blood.

Another nodular lesion that may be confused grossly with infarcts is cystic degeneration. Small foci in decidual septa, and less frequently in trophoblastic cell columns, may liquefy and form cyst-like spaces ﬁlled with mucinous material resembling Wharton jelly. Microscopically, the absence of necrotic villi rules out infarction.

Chorioangiomas may closely resemble red infarcts grossly. They are rare lesions and can readily be distinguished microscopically from infarcts because of their neoplastic nature.

Fibrin deposits, thrombi, hematomas, and foci of cystic degeneration appear pathologically to be degenerative processes. Their etiology and clinical signiﬁcance are unknown. Although minor degrees of these lesions are common in term placentas, they are far more numerous in certain cases of fetal death in utero, the cause of which often remains undetermined.