Swelling, ecchymosis, and tenderness signal a significant injury to the knee. Clinical findings may also include joint effusion, limitation of motion, and instability. Arthrocentesis is often performed to help define the nature of the intra-articular pathologic processes. A large-bore needle is used via an anteromedial or anterolateral approach (usually superior with knee in extension or at joint line with knee in flexion), with care to avoid injury to the articular cartilage. 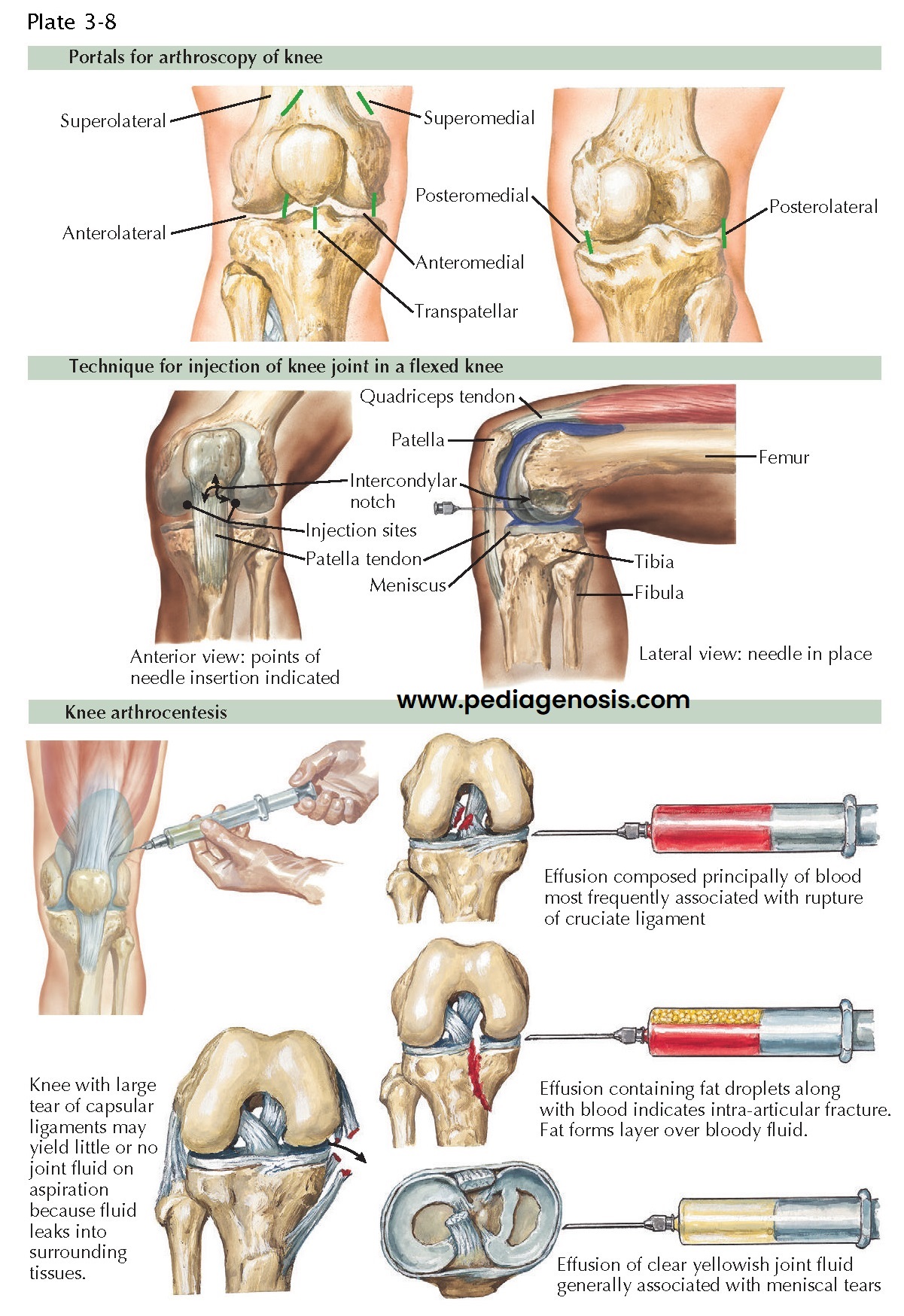 Fluid obtained from the joint is often sent for white blood cell count with differential, Gram stain, and culture and examined microscopically under polarized light to detect any crystals. Healthy joints usually yield less than 5 mL of fluid. Normal synovial fluid is clear, pale yellow, and more viscous than water. The average number of leukocytes is about 65/mm3, and most are lymphocytes and monocytes. Acute inflammation increases the ratio of polymorphonuclear leukocytes to lymphocytes and monocytes.

Synovial effusions are categorized as group I, noninflammatory; group II, inflammatory; group III, septic; and group IV, hemorrhagic. Group I synovial fluid has high viscosity, is pale to dark yellow, and is transparent. Leukocyte count is generally under 200/mm3, of which about 25% are polymorphonuclear leukocytes. Glucose concentration is similar to that in serum. Group I fluid is typically found in joints with osteoarthritis.

Group II synovial fluid has low viscosity, may be yellow to light green, and is translucent. Leukocyte counts of 2,000 to 75,000/mm3 are common, and about 50% of the cells may be polymorphonuclear leukocytes. Glucose concentration is generally lower than that in serum. Group II synovial fluid is found in joints with rheumatoid arthritis.

Group III synovial fluid is obtained from a native septic joint and has a variable viscosity and color but is opaque. The leukocyte count is frequently greater than 50,000/mm3, and polymorphonuclear leukocytes predominate (75%). The glucose level is significantly lower than that in serum. Group IV synovial fluid is bloody, has variable viscosity, and often looks like whole blood on gross examination. A knee joint effusion consisting principally of blood (hemarthrosis) is often associated with rupture of the ACL.

An effusion containing numerous fat droplets along with blood indicates an intra-articular fracture. The volume of fat may be so great that the fat layer is visible on a lateral radiograph of the knee; after aspiration, the fat appears as a distinct layer floating on the synovial fluid and blood in the syringe. Other injuries, such as avulsion of a ligament at its insertion into bone, may produce a hemarthrosis with a few fat droplets. A large tear of the joint capsule may result in little or no detectable effusion because the blood and joint fluid leak into the periarticular tissues and they cannot be aspirated from the joint.