Delirium is an acute confusional state commonly seen in patients with medical illness, especially among the geriatric population. Delirium encompasses four key clinical features, including (1) a disturbance of consciousness with impaired attention and concentration, (2) the disturbance develops over a short period of time (hours to days) and often fluctuates in severity. (3) a perceptual disturbance that is not related to a pre-existing condition such as dementia, and (4) an underlying medical condition, intoxication, or medication side effect is evident. Approximately 30% of older patients experience delirium in the course of hospitalization, with higher rates among more frail patients and those under-going complex surgery. In the intensive care unit (ICU), the prevalence of delirium is about 70% as measured by standardized screening and diagnostic tools. 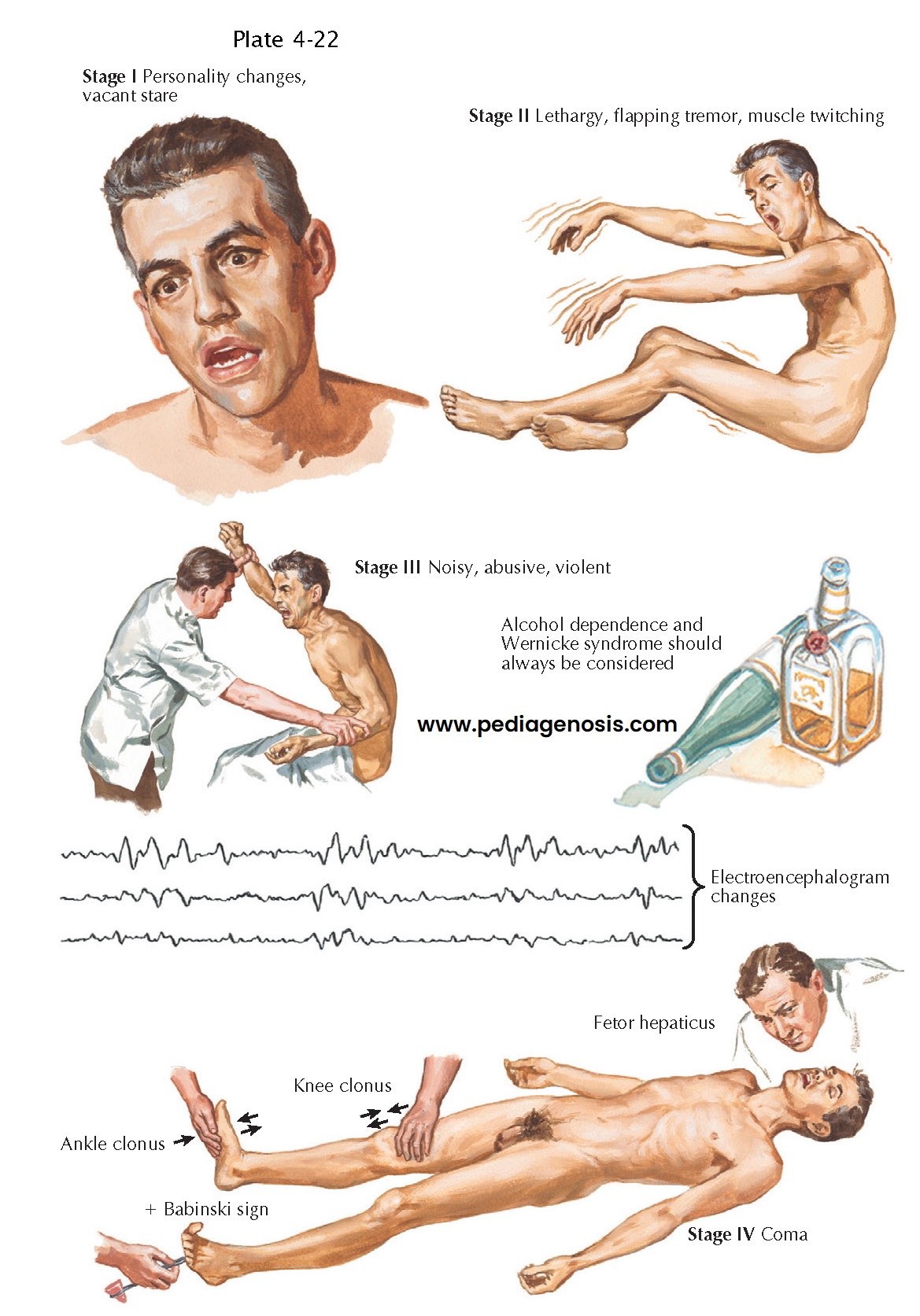 There are multiple pathophysiologic mechanisms that may cause delirium; there is no final common pathway allowing a simple approach to diagnosis or treatment. The neurobiologic basis of delirium is, therefore, poorly understood, and diagnosis relies on a comprehensive clinical assessment with judicious use of ancillary studies. In general, areas of the brain that govern arousal, attention, insight, and judgment are affected. These include the subcortical ascending reticular activating system (ARAS) and integrated cortical regions. The ARAS predominantly serves arousal mechanisms, whereas integrated cortical function is necessary for proper orientation to person, place, and time, as well as higher cognitive functions.

Of the neurochemical pathogenic mechanisms of delirium, the best understood is the cholinergic system. Anticholinergic drugs are commonly associated with delirium in healthy patients but much more so in the elderly. Conditions that may predispose to delirium secondary to acetylcholine depletion include hypoxia, hypoglycemia, thiamine deficiency, and Alzheimer disease. In addition, many commonly used drugs may precipitate delirium due to secondary anticholinergic effects. Additional neurotransmitter systems that may precipitate delirium include GABA, endorphins, neuro-peptides, serotonin, and norepinephrine. Other neuro-chemical precipitants of delirium include endogenous chemicals, such as proinflammatory cytokines and tumor necrosis factor-alpha, which may explain delirium occurring in the context of infection/sepsis, surgery, and hip fractures. The blood-brain barrier is weakened by sepsis, even in pediatric cases. Other than advanced age, pre-existing CNS disease, such as Alzheimer disease, Parkinson disease, stroke, etc., accounts for a significant increase in risk for delirium. Indeed, a new delirium in an elder patient may be a heralding sign of previously unrecognized or impending dementia.

The presentation of delirium is typically acute, over hours or days, and may persist for days to months. There may be a prodromal phase, especially in elder patients, including fatigue and lethargy, sleep disturbance, anxiety and/or depression, or restlessness. The acuity of onset differentiates delirium from dementia in most cases, although delirium in a demented patient may be difficult to detect, especially early in the course. More-over, the severity of confusion may fluctuate through-out the day, becoming particularly more prominent toward night-time. Initially, there may be a subtle change in mental clarity, inattention, and disorientation before more obvious behavior changes take place. The patient is often very distractible, unable to maintain a cohesive train of thought or action. Patients are typically disoriented to time. In more advanced cases, patients may become more obviously drowsy and lethargic, even obtunded. However, the opposite may occur in some forms of delirium, where the patient becomes hypervigilant, irritable, and agitated, as seen in alcohol withdrawal. Hallucinations may occur. Cognitive deficits, including amnesia, aphasia, agnosia, and apraxia may also appear. Other clinical manifestations may include emotional lability, disturbance of sleep cycle, motor restlessness, and sometimes motor signs, such as asterixis, myoclonus, or action tremor. In the elder patient, the most common presentation is of a withdrawn, quiet state that may be easily mistaken for depression.

Delirium is often misattributed to psychiatric diagnoses— usually depression and catatonic schizophrenia in hypoactive deliriums, and personality disorders and psychosis in hyperactive deliriums. A patient with a first-episode psychosis or mania should be of typical age, that is, a young adult, and should appear generally well, not diaphoretic, flushed, befuddled, jaundiced, or clumsy. Psychiatric illness usually does NOT account for disorientation, and does NOT cause motor symptoms or fevers. Fluctuations in degree of alertness, variable motor signs, and uneven cognitive performance are expected in delirium and do not signify a manipulative personality. Use of antipsychotic medication may enable care, shorten duration of delirium, and improve mortality, even when the underlying cause is not psychiatric.

Psychiatric illness is a diagnosis of exclusion for delirium and should be confirmed with a psychiatric consultant when suspected. Similarly, if a delirious patient is under psychiatric care, neurologic consultation should be obtained. Frontal brain tumors, multiple sclerosis, epilepsy, encephalitis, and dementia can all have delusions, hallucinations, mania, and aggression as manifesting signs. Repeating sequences of odd behavior, indifferent attitude, amnesia, atypical age, absence of prior or family history of mental illness, and presence of primitive reflexes indicate more screening for neurologic disease.

Substance abuse very frequently leads to various confusional presentations. The use of illicit substances and overuse of alcohol are usually denied in medical settings; however, ingestion of toxins and drug overdose, either recreational or suicidal, should be considered in all cases of delirium. Alcohol, barbiturates, and benzodiazepines all have life-threatening withdrawal syndromes, as well as syndromes of intoxication. Antipsychotics are not a treatment for withdrawal syndromes. Replacement therapy and controlled taper for alcohol, benzodiazepine, and barbiturate-dependent patients are lifesaving. Very rarely, anti–N-methyl-d-aspartate receptor (NMDAR) encephalitis, a novel and significantly underdiagnosed diffuse encephalopathy, manifests primarily (80%) in women with a combination of psycho- sis, including catatonia, as well as dyskinesias, memory deficits, and convulsions. The abnormal movements are varied, often including oral-lingual-facial akathisia but also choreoathetosis, dystonia, oculogyric crisis, dystonia, rigidity, and opisthotonos. Often, there is a less than 2-week history of a prodromal febrile illness, including headache and respiratory or gastrointestinal symptoms. This anti-NMDAR encephalitis is either a paraneoplastic disorder, secondary to an underlying ovarian teratoma, or a primary autoimmune disorder occurring in young adults or children. This is potentially reversible if recognized early and treated with surgery and/or immunosuppression. Prognosis largely depends on adequate immunotherapy and, in paraneoplastic cases, complete tumor removal.

Regardless of the individual case, a comprehensive history, examination, and review of the medical record must be completed to determine the underlying cause(s). Seizures and focal signs on examination require brain imaging (magnetic resonance imaging [MRI]/computed tomography [CT]) and/or electroencephalography (EEG) to assess for acute structural lesions, infection, or inflammation. The nature of the patient’s underlying medical condition requires standard laboratory tests, including blood cultures as well as cerebrospinal fluid examination to demonstrate evidence of possible systemic infections, electrolyte disturbance, volume depletion, liver failure, uremia, thyrotoxicosis, and other systemic disorders.

The examiner must consider potential permanently damaging conditions, such as thiamine deficiency (Wernicke encephalopathy), herpes encephalitis, or NMDAR encephalitis, all requiring emergent therapy. A careful review of medications and toxicology screens is essential. Drug toxicity accounts for 30% of delirium cases; over-the-counter drugs, such as diphenhydramine, require attention, and other specific drug syndromes exist as well. When no mechanism is identified for the acute personality change, particularly in young women, abdominal/pelvic imaging studies as well as anti-NMDAR autoantibodies must be evaluated in serum or cerebrospinal fluid to exclude anti-NMDAR encephalitis.

Antipsychotic medications can precipitate the neuroleptic malignant syndrome, a triad of acute confusion, rigidity, and hyperthermia. Antipsychotic medications, often useful for behavioral control of an agitated patient, may also cause their own behavioral syndrome of severe motor restlessness, or akathisia, which is usually accompanied by markedly increased muscular tone and cramping. Combinations of antidepressants, migraine medications, and some antibiotics can trigger the serotonin syndrome, causing a triad of confusion, autonomic instability, and clonus. Lithium, along with other narrow-window therapeutic drugs, such as digitalis, can cause delirium even with levels in the recommended therapeutic range. Lithium toxicity usually manifests with vomiting or diarrhea, severe tremors, and ataxia, whereas digitalis toxicity often causes paranoia and hallucinations. Serum levels of any drug the patient is taking should be checked when available, and all nonessential medications should be held. 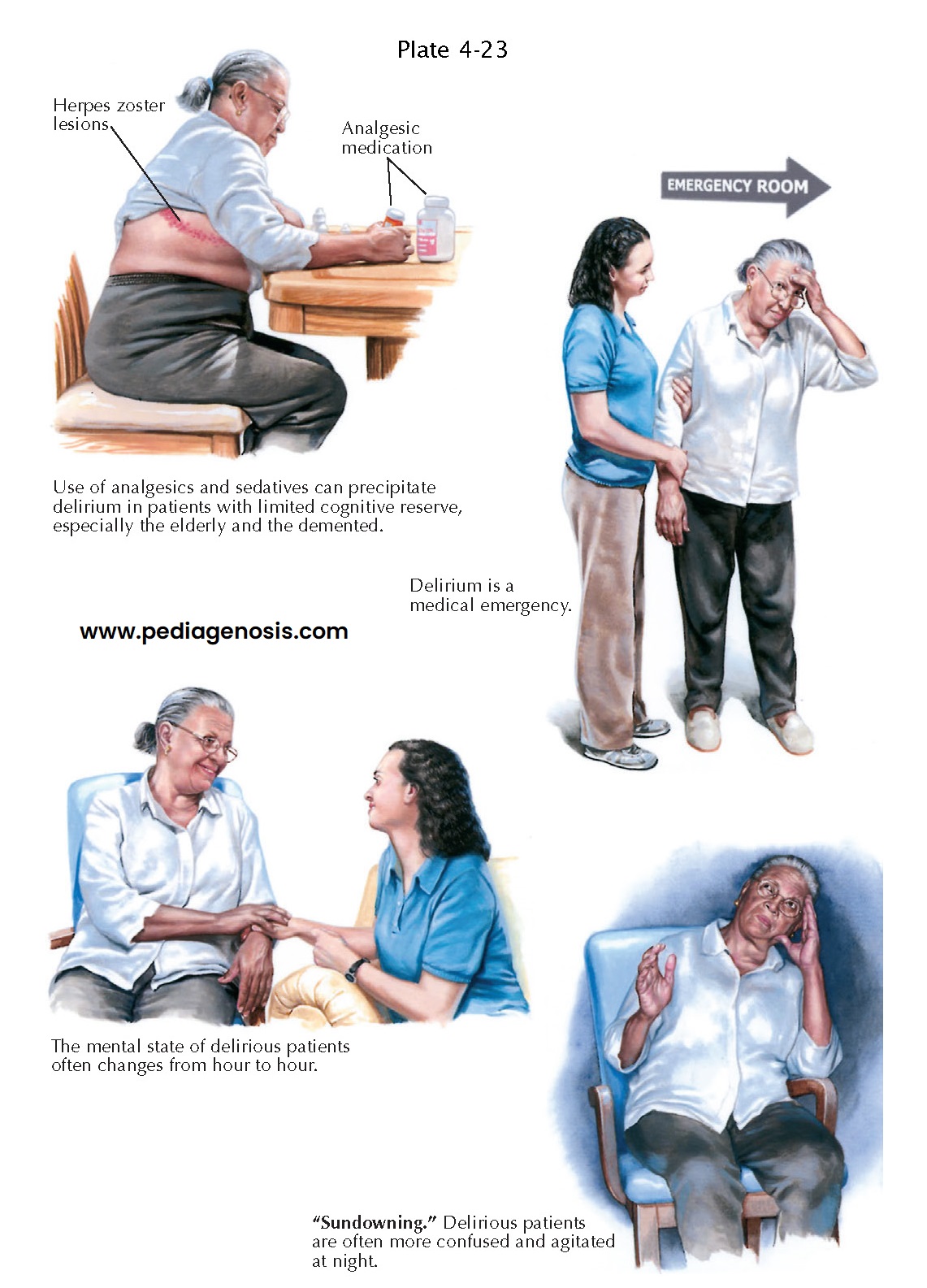 Treatment of delirium requires identification of the underlying medical problem, judicious use of psychoactive medication to keep the patient and others safe from aberrant behavior, and maintaining a peaceful environment. The presence of delirium is a well-established source of increased morbidity and mortality—and a syndrome in urgent need of a diagnosis.