Most people experience occasional insomnia sometime in their lives. However, a diagnosis of insomnia disorder, which is present in 10% to 15% of adults, requires a symptom, that is, difficulty with sleep onset, sleep maintenance, or nonrestorative sleep; a frequency and duration present on most nights over a period of at least 4 weeks; and a consequence, associated distress, or social occupational dysfunction. Insomnia disorder is most commonly comorbid (75%), in which the insomnia occurs in the context of a medical, psychiatric, or sleep disorder that initiated or maintained the sleep disturbance, or primary insomnia, with no comorbid disorders. 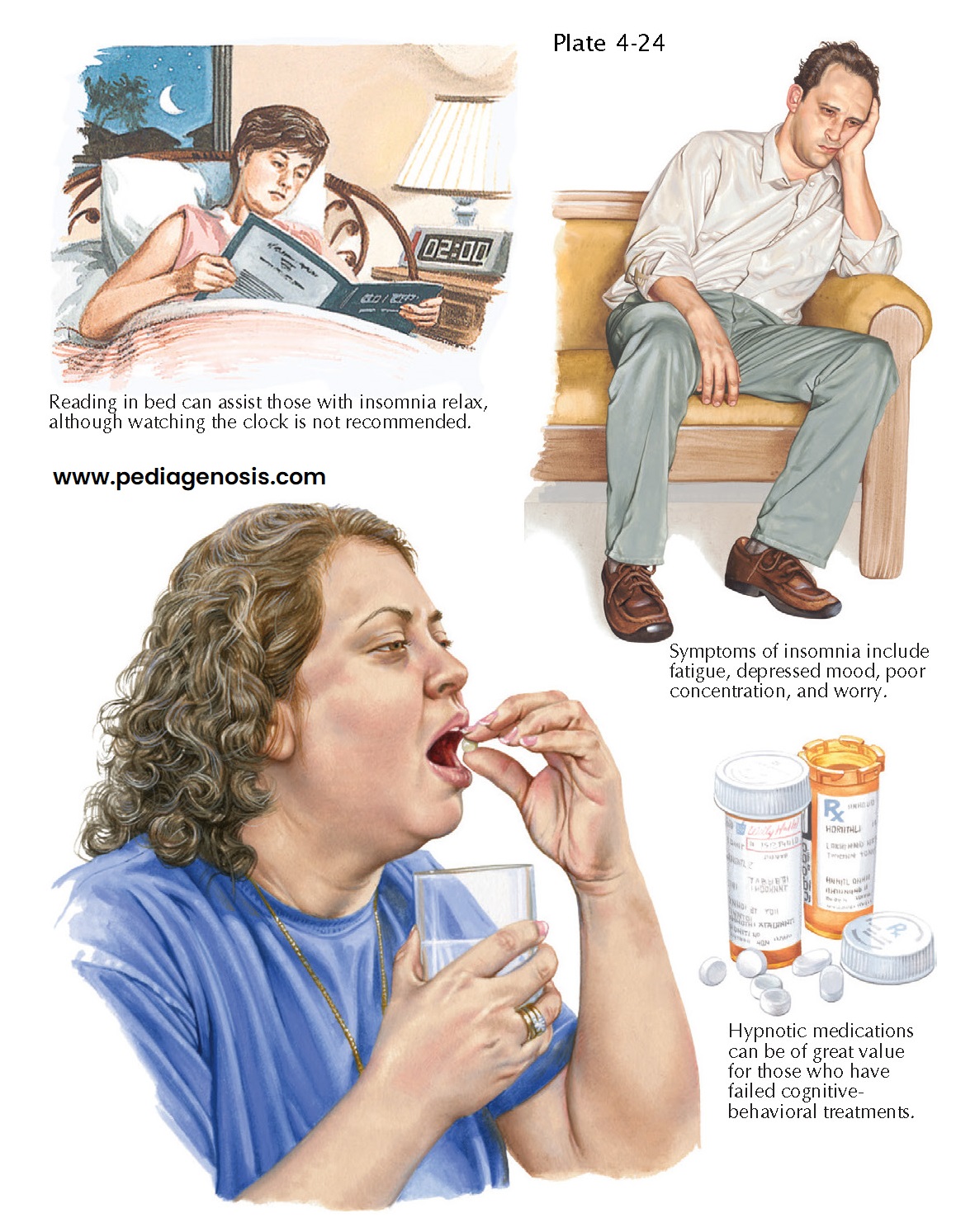 Insomnia disorder is more common with increasing age, female gender, poor physical health, and increased social and familial stress. Often, this is a chronic condition, with 50% of insomnia disorder patients continuing to meet criteria after 3 years, particularly with more severe symptoms. However, specific insomnia symptoms (initial insomnia, nocturnal awakenings) are often dynamic, shifting over the course of the disorder. In comorbid insomnia, sleep disturbance is a marker of greater medical, neurologic, and psychiatric illness severity. Insomnia disorder is an independent risk factor for incident major depressive episodes. It is not established whether comorbid insomnia treatment improves outcomes in such disorders. Insomnia sufferers have an increased risk of hypertension and diabetes.

The construct of hyperarousal helps understand much of the physiology of insomnia disorder, although it is unclear whether the hyperarousal is a cause or consequence (or both) of insomnia. Evening cortisol elevations, increased body temperature and basal metabolic rate, waking EEG patterns, elevated glucose metabolism (using positron emission tomography [PET]) during non-REM sleep, and reductions in brain GABA during wakefulness all point to nervous and autonomic system hyperarousal in insomnia disorder. Insomnia disorder may not be primarily a nocturnal disorder but rather something that actually lasts throughout the 24-hour day, with insomnia its primary expression.

Insomnia neurobiology is not fully defined, although advances in sleep biology provide guidance to potential CNS substrates. The brain contains multiple systems promoting sleep and others enhancing wakefulness. Pedunculopontine and laterodorsal tegmental nuclei (PPT and LDT, respectively) cholinergic neurons innervate the thalamus and cortex firing most actively during wakefulness. Similarly, noradrenergic, serotonergic, and histaminergic cells in the locus coeruleus, raphe nucleus, and tuberomammilary nucleus project to the lateral hypothalamus, thalamus, and frontal cortex, respectively, and fire most actively during the waking state. Orexin-containing cells in the lateral hypothalamus project widely to the cerebral cortex and fire actively during waking to support arousal. The latter receive afferents from monoaminergic brainstem arousal centers, also providing extensive input to these centers. The cortex itself provides assistance to the arousal centers with reciprocal innervations.

GABAergic-containing neurons in the ventrolateral preoptic nucleus (VLPO) promote sleep by inhibiting arousal centers. Thus our current simplified under- standing of sleep physiology informs us that redundant and interactive neural systems control sleep. It is not surprising that despite a powerful sleep drive, there are many neuroanatomic substrates for pathology to develop. Thus insomnia may be related to either inadequate inhibitory activity from VLPO sleep- promoting neurons or excess brainstem activation of arousal centers, or even simultaneous activation of both excitatory and inhibitory influences, leading to unstable sleep states.

Marketed medications known to assist with sleep have existed for more than 100 years, although alcohol and opioids have been used for this purpose for much longer. The commonly prescribed medications bind to benzodiazepine receptors, an allosteric site on the GABA-A receptor, enhancing GABAergic (inhibitory) transmission. Many benzodiazepine receptor agonists exist, and they differ from each other predominantly only in their half-life. These medications are also anticonvulsant, anxiolytic, and myorelaxant and may produce tolerance, physical dependence, and with-drawal symptoms upon rapid discontinuation. There-fore their use is controlled. Other common medications used to promote sleep act at the monoaminergic receptors involved in CNS arousal. For instance, drugs with antihistaminergic properties are available for treatment of allergic reactions, as antidepressants and antipsychotics. Other drugs bind to the melatonin receptor in the CNS, promoting sleep by uncertain mechanisms.