Divisions of the Pituitary Gland and its Relationships to the Hypothalamus

Divisions of the Pituitary Gland and its Relationships to the Hypothalamus 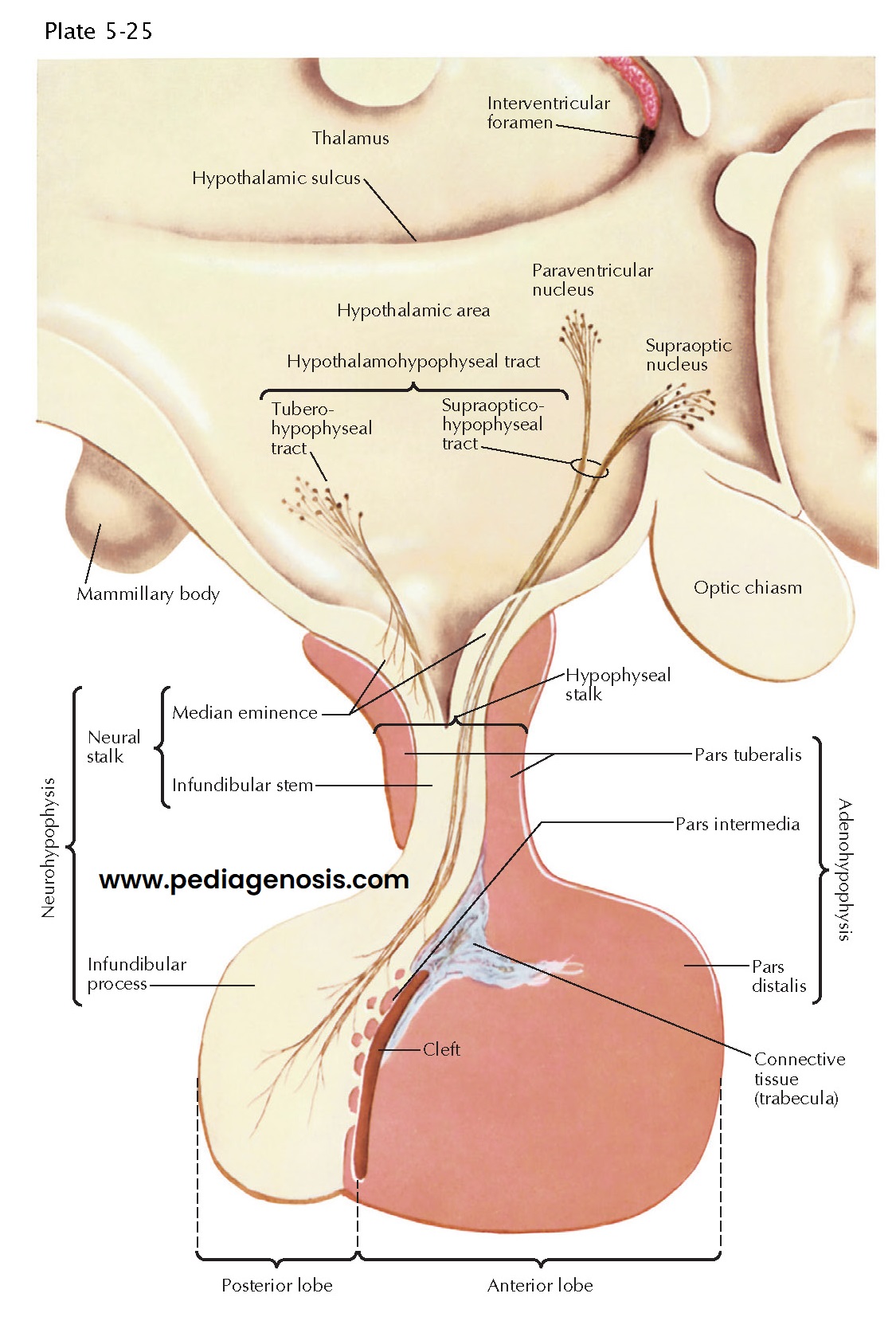 The gland is composed of the adenohypophysis and the neurohypophysis, which are embryologically, anatomically, and functionally distinct. The former derives from the Rathke’s pouch, an ectodermal outgrowth of the primordial stomodeum, whereas the latter derives from the neural ectoderm and can be considered an extension of the hypothalamus.

The adenohypophysis comprises the pars distalis, the pars intermedia, and the pars tuberalis (a small portion of the adenohypophysis wrapped around the neurohypophysis in the stalk). The pars distalis is also known as the anterior lobe (or pars glandularis), whereas the pars intermedia is poorly developed in humans. The pars intermedia contains a connective tissue trabecula sepa- rating the anterior and posterior lobe as well as a narrow cleft or several small cysts at the site of the embryonic Rathke’s pouch. During development, populations of stem cells differentiate into distinct groups of adenohypophyseal secretory cells under the influence of specific transcription factors.

Several differentiated cell types arise from a common stem cell precursor, including somatotrophs, lactotrophs, mammosomatotrophs, and thyrotrophs. Somatotrophs secrete growth hormone, constitute about 50% of the cell population in the adenohypophysis, and are mainly present in the lateral wings of the anterior lobe. Lactotrophs secrete prolactin, account for approximately 9% of adenohypophyseal cells, and are concentrated in the posterolateral areas of the anterior lobe.

Thyrotrophs secrete thyrotropin, constitute about 5% of adenohypophyseal cells and are concentrated in the anteromedial areas of the pars distalis.

Gonadotrophs constitute approximately 10% of cells in the adenohypophysis, are distributed throughout the anterior lobe and pars tuberalis, and secrete both follicle-stimulating hormone and luteinizing hormone. Other, nonsecretory cell populations in the adenohy-pophysis include follicular and folliculostellate cells.

The neurohypophysis comprises the neural stalk, itself subdivided into the median eminence and the infundibular stem (also known as infundibulum), and the infundibular process (posterior lobe, pars nervosa or neural lobe). The neurohypophysis contains neuronal axons whose cell bodies are present in the supraoptic and paraventricular hypothalamic nuclei. Most of these axons terminate in the posterior lobe, with a minority of the axon terminals being located in the median eminence and the infundibulum. Antidiuretic hormone and oxytocin are synthesized in cell bodies of neurons in the supraoptic and paraventricular nuclei, are transported down the axons and secreted by exocytosis from axon terminals in response to nerve impulses. Pituicytes are glial cells supporting the axon terminals in the neurohypophysis.