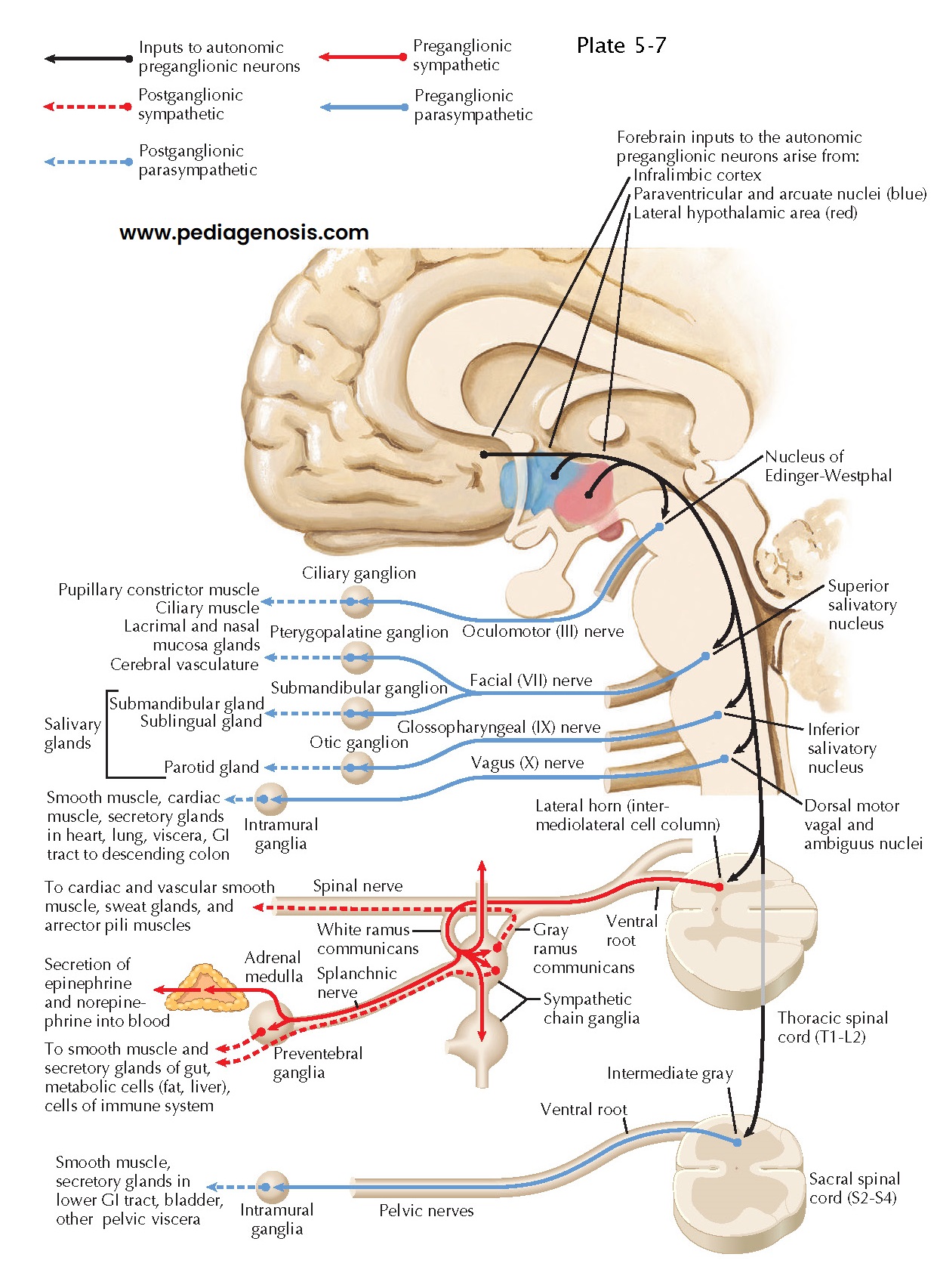 Other than a relatively modest projection to the pre-ganglionic neurons from the infralimbic cortex, the hypothalamus is the highest level of the neuraxis that provides substantial input to the autonomic nervous system. It regulates virtually all autonomic functions and coordinates them with each other, and with ongoing behavioral, metabolic, and emotional activity. The hypothalamus contains several sets of neurons, using different neurotransmitters, that provide innervation to the sympathetic and parasympathetic preganglionic neurons, as well as brainstem areas that regulate the autonomic nervous system. Many of these neurons are in the paraventricular nucleus of the hypothalamus. These form populations of small neurons that are typically dorsal or ventral to the main endocrine groups, and most of the paraventricular-autonomic neurons contain messenger ribonucleic acid (mRNA) for either oxytocin or vasopressin. The descending pathways also stain immunohistochemically for these peptides and are probably involved in stress responses.

A second set of hypothalamic-autonomic neurons is found in the lateral hypothalamic area. These consist mainly of neurons containing orexin or melanin-concentrating hormone (MCH) neurons, and some-times the peptide cocaine- and amphetamine-regulated transcript (CART), which is thought to be involved in regulation of feeding and metabolism as well as wake-sleep and locomotor activity. A third population of hypothalamic-autonomic cells is found in the arcuate nucleus and adjacent retrochiasmatic area. These neurons contain α-melanocyte–stimulating hormone and CART and may also be involved in feeding and metabolic regulation.

All three sets of neurons send axons to the brainstem, where they innervate the nucleus of the solitary tract (which receives visceral afferent input from the glos-sopharyngeal and vagus nerves), as well as the regions that coordinate autonomic and respiratory reflexes in the ventrolateral medulla. Other axons innervate the parasympathetic preganglionic neurons in the Edinger-Westphal nucleus (pupillary constriction), the superior salivatory nucleus (associated with the facial nerve, which supplies the submandibular and sublingual salivary glands as well as the cerebral vasculature), the inferior salivatory nucleus (associated with the rostral tip of the nucleus of the solitary tract, supplying the parotid gland), the dorsal motor vagal nucleus (which supplies the abdominal organs), and the nucleus ambiguus (which is the main source of vagal input to the thoracic organs, including the esophagus, heart, and lungs).

Finally, there are descending axons from the hypothalamus that innervate the sympathetic preganglionic neurons in the thoracic spinal cord. Different populations of hypothalamospinal neurons contact distinct targets. For example, the main projection from the orexin neurons is to the upper thoracic spinal cord, which may be important for autonomic functions associated with ingestion. The oxytocin neurons innervate specific clusters of sympathetic preganglionic neurons at multiple spinal cord levels.

In addition, there is a major input to the medullary raphe nuclei from the preoptic area and dorsomedial nucleus of the hypothalamus. The medullary raphe nuclei contain both serotoninergic and glutamatergic neurons that innervate the sympathetic preganglionic column at multiple levels and regulate populations of neurons involved in thermoregulation. This pathway is thought to be a major mechanism for regulating body temperature.

Damage to the descending hypothalamic-autonomic pathway, in the lateral medulla or spinal cord, causes an ipsilateral central Horner syndrome. Such patients not only have a small pupil and ptosis on that side but lack sweating on the affected side of the face and body.