Intimate partner abuse refers to physical, sexual or psychologic maltreatment by a current or prior partner or spouse. It can take place in the context of heterosexual or same-sex couples and can consist of a single incident or recurrent, severe violence lasting many years. 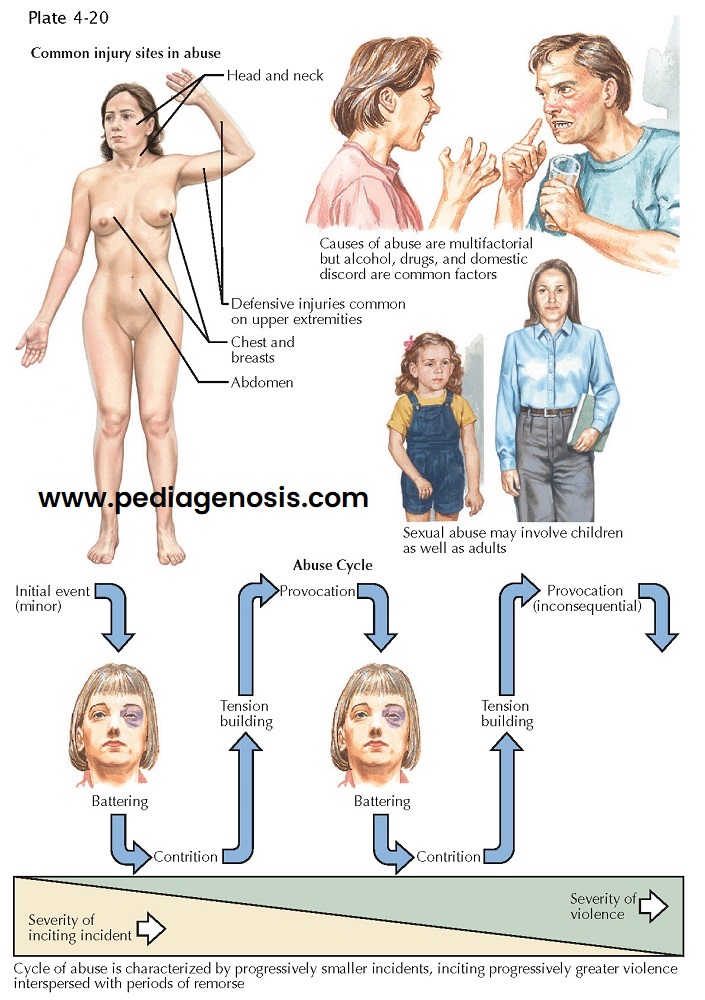 The pneumonic SAFE (Sebastian, 1996) is often used to facilitate the discussion of intimate partner abuse by asking about (1) Stress and Safety in the relationship, (2) being Afraid of or Abused by one’s partner, (3) having Friends or Family who can serve as social supports, and (4) having an Emergency plan if in danger.

Management. Physicians must provide victims of intimate partner abuse with an environment where they feel safe. A thorough history and physical examination are required, with detailed documentation in the medical record of all findings and interventions. Intimate partner abuse must be acknowledged to the patient, who needs to be told that there is no excuse for abuse and that he or she is not at fault.

The patient must receive medical and surgical treatment as needed for sequelae of abuse, as well as evaluation for signs and symptoms of psychologic trauma. Victims need to be warned that violence often becomes more severe with time. A risk assessment should evaluate the safety of victims and their children. Intimate partner abuse must be reported to legal authorities if appropriate. Physicians need to formulate a safety plan with the patient and offer referrals for shelter, legal assistance, and mental health services.

Course. Lenore Walker published a theory in 1979 that describes the cyclic pattern of abusive relationships: (1) the tension-building phase occurs before an abusive incident and involves mounting tension in the setting of ineffective communication and passive-aggressive behavior; (2) the acting-out phase involves violent or otherwise abusive acts; (3) the reconciliation/ honeymoon phase, which consists of statements of apology, displays of affection, or attempts to overlook the preceding abuse, followed by a “calm phase.”