Limbic and Cortical Inputs to the Hypothalamus

Limbic and Cortical Inputs to the Hypothalamus

In addition to having direct sensory inputs, the hypothalamus receives highly processed information from the cerebral cortex, which is relayed via the limbic system. The limbic lobe of the brain was first defined by Paul Broca, in 1878, as the cortex surrounding the medial edge of the cerebral hemisphere, as shown in orange in the upper figure. Broca’s limbic lobe includes the cingulate gyrus (the infralimbic, prelimbic, anterior cingulate, and retrosplenial areas), the hippocampal formation (including the entorhinal area, subiculum, hippocampal CA fields, and dentate gyrus), and the amygdala. These limbic regions all receive highly processed sensory information from the association regions of the cerebral cortex, process that information for its emotional content, and then project back to the association cortical areas to provide emotional coloring to cognition. 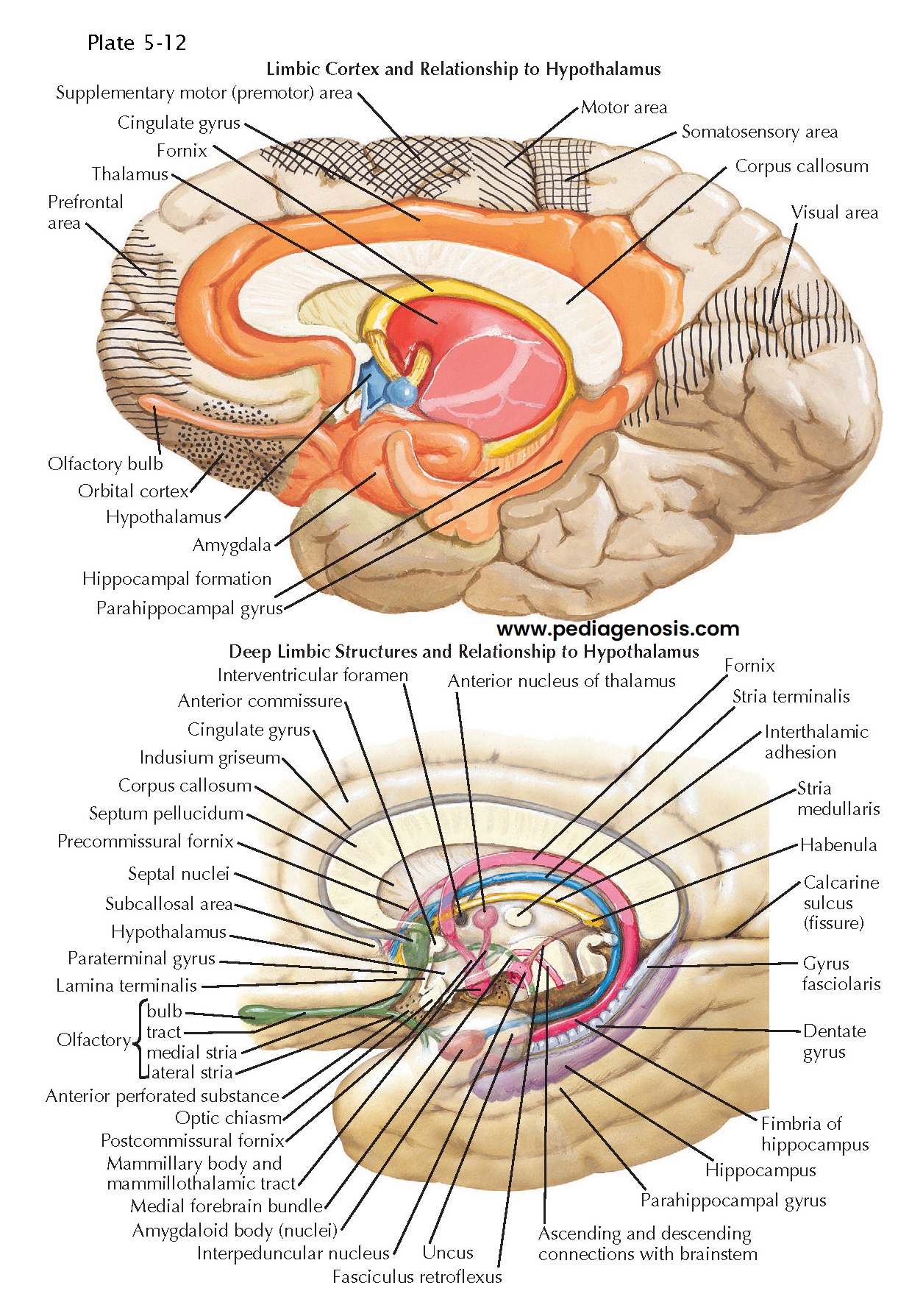 Each of the limbic areas also sends descending inputs to the hypothalamus. The inputs from the cingulate gyrus mainly originate in the infralimbic and prelimbic regions (around and just beneath the splenium of the corpus callosum). These areas mainly send axons to the lateral hypothalamus, as well as to components of the autonomic system in the brainstem and the spinal cord, and are believed to provide much of the auto- nomic component of emotional response.

Neurons in the hippocampal formation, particularly the CA1 field and the subiculum, send axons to the hypothalamus through the fornix. This long looping pathway, shown in yellow in the figure, curves just under the corpus callosum, and then dives into the diencephalon at the foramen of Monro. Many axons leave the fornix in the hypothalamus and provide inputs to the ventromedial nucleus. However, a dense column of fornix axons reach the mammillary body, where they terminate. These structures are shown in blue in the upper figure and red in the lower one. Although the hippocampus appears to be very important in memory consolidation, isolated damage to the fornix or mam- millary bodies has more limited and inconsistent effects on memory, so the function of this pathway remains enigmatic.

The mammillary nuclei provide another salient bundle of axons to the anterior nucleus of the thalamus. This mammillothalamic tract is heavily myelinated and easily seen, but its contribution to memory formation is more subtle, like that of the mammillary body itself. Lesions of the mammillothalamic tract have been reported to prevent the generalization of limbic sei- zures, however, and this pathway has been suggested as a target for deep brain stimulation to prevent generalization of seizures. The anterior thalamic nucleus projects to the cingulate gyrus, and, in 1937, James Papez hypothesized that perhaps the momentum of emotions could be explained by a “reverberating circuit,” completed by a projection from the cingulate cortex back to the hippocampus, to neurons that contribute to the fornix. Although there is no credible evidence for this last link in the “circuit” actually existing or for the proposed circuit actually playing a role in emotion, the theory has achieved great attention.

The amygdala provides the hypothalamus with inputs via two pathways. Some axons leave the amygdala in parallel to the fornix, running along the lateral edge of the lateral ventricle just below the tail and body of the caudate nucleus in the stria terminalis, shown in blue in the lower figure. Other amygdaloid inputs to the hypothalamus take a much more direct anterior route, running over the optic tract into the lateral hypothala- mus. Many hypothalamic cell groups receive inputs from the amygdala, which are thought to be important for the vis eral components of conditioned emotional responses.