Because preeclampsia is a condition peculiar to pregnancy, and because delivery usually results in the rapid regression of the signs, symptoms, and pathologic lesions, it would seem reasonable to believe that the contents of the gravid uterus either may be the source of the vasoconstrictor factor or may play an important role in leading to the production of that factor elsewhere in the body. The fetus is not a required factor, because severe preeclampsia occasionally accompanies hydatidiform mole. Therefore, the trophoblastic tissue or the gravid endometrium would seem to be incriminated. Despite this, there are no micro- or macroscopic placental lesions that are pathognomonic for preeclampsia. 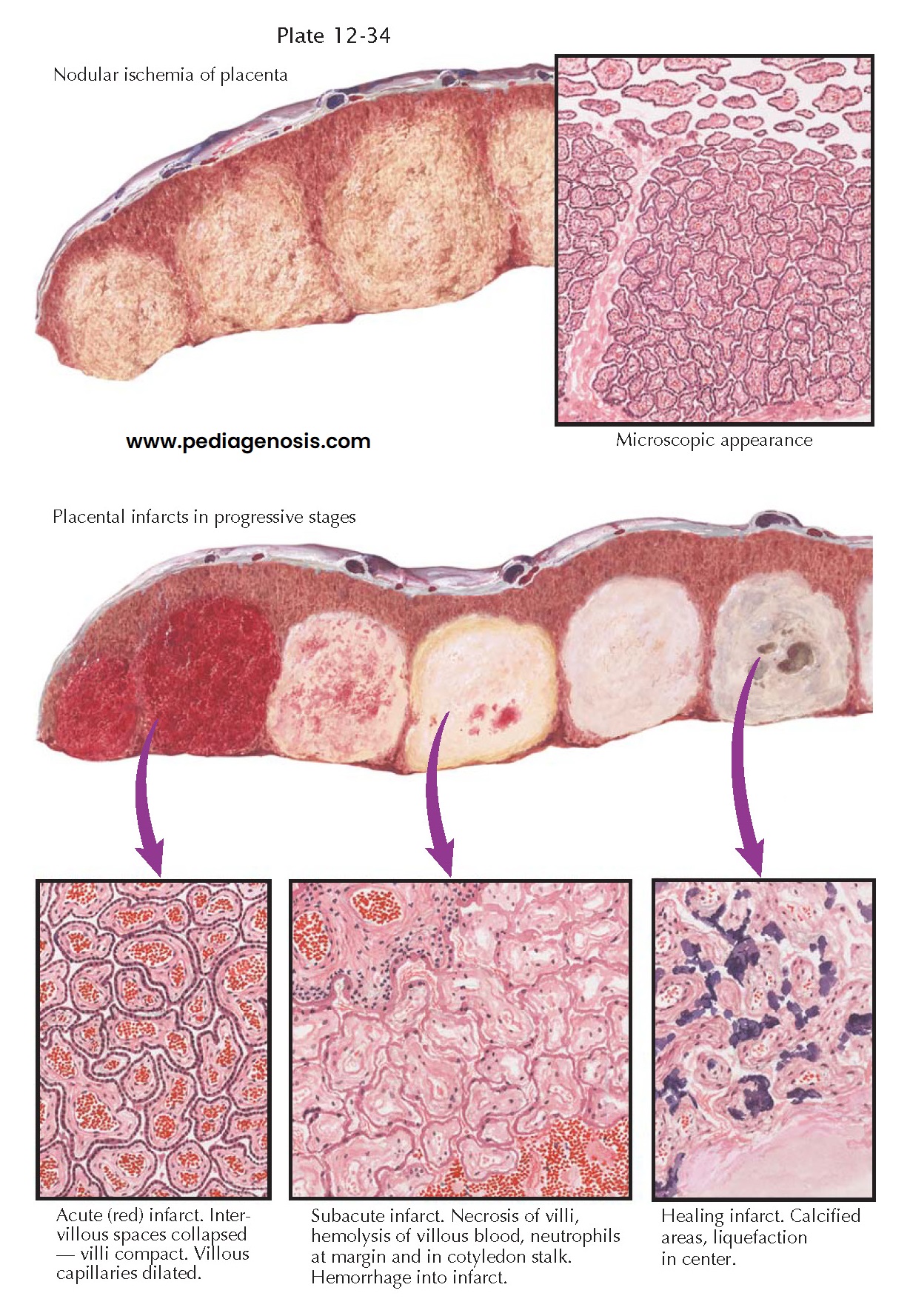 Pathologic studies have revealed close correlation between the occurrence of preeclampsia and conditions that are prone to cause a decrease in the maternal circulation to the placenta, to the decidua, or to both of these tissues. Obstruction of the maternal blood ﬂow to one or more placental cotyledons causes true infarction of the involved areas. Unfortunately, the term infarct has often been used for a wide variety of nodular lesions in the placenta, and conﬂicting opinions have been expressed concerning the association of such lesions with preeclampsia.

True infarcts are usually found on the maternal aspect of the placenta but are often not visible until cross sections are made. They then appear as round or oval nodules of increased density and may be varying shades of red, yellow, or gray, according to their age. Microscopically, they consist of necrotic chorionic villi. Immediately after cessation of the maternal blood ﬂow to a cotyledon, the intervillous spaces collapse. The part becomes pale and of increased density. This is called nodular ischemia. The areas with more venous blood beneath the chorionic plate and between the cotyledons are less affected than the centers of the nodules. If the fetus is alive, dilation and ﬁlling of the unobstructed villous capillaries ensue, and, thus, the part becomes congested and an acute red infarct is produced. If the fetus is dead, the infarct remains ischemic. In either case, as the villi become necrotic, the nuclei undergo karyorrhexis and karyolysis, the red cells become hemolyzed, and the entire area takes on a yellowish hue. A reaction zone of neutrophils forms at the margin between the dead and living tissue, appearing as a dense ring around the lesion. This is called the subacute stage of infarction.

Infarcts in the placenta do not heal by organization. No ﬁbroblastic proliferation or budding of capillaries has been found in the many examples of old infarcts examined. Calcium is deposited at the periphery of the lesions, which become gray or white as they age. The centers are prone to liquefy and become cystic.

Because cotyledon stalks bearing large fetal vessels are often included in the depths of large infarcts, the fetal circulation continues until necrosis of the supporting tissues causes rupture and hemorrhage of fetal blood into the necrotic area. If the hemorrhage is extensive, it may rupture retroplacentally and be a factor in the initiation of premature separation. This can also result in exposing the mother to fetal blood antigens such as Rh (D).

Studies carried out in the past several years have shown no signiﬁcant difference between the placentas of pregnancies complicated with preeclampsia/eclampsia and control groups with regard to ischemic changes of the placenta. Endovascular trophoblastic plugs in the basal plate vessels may play an additional role in the development of ischemic lesions in preeclampsia/ eclampsia, but these may also represent indirect evidence of the abnormal expression of certain adhesion molecules in this disorder. In preeclampsia, trophoblast invasion is impaired and this, along with endothelial dysfunction, has been suggested to play a role in the pathogenesis of preeclampsia, but support for this has been variable and inconsistent.