Although preeclampsia and eclampsia are differentiated, depending upon whether or not the patient has had a convulsion, the pathology of the two is essentially the same. Characteristic lesions frequently appear in the liver, kidneys, and brain, but they are inconstant in occurrence and may be absent even in severe cases with convulsions. Therefore, they cannot be considered primary lesions but are probably the sequelae of the three constantly present features of the disease, namely, vasoconstriction, hypertension, and ﬂuid retention. 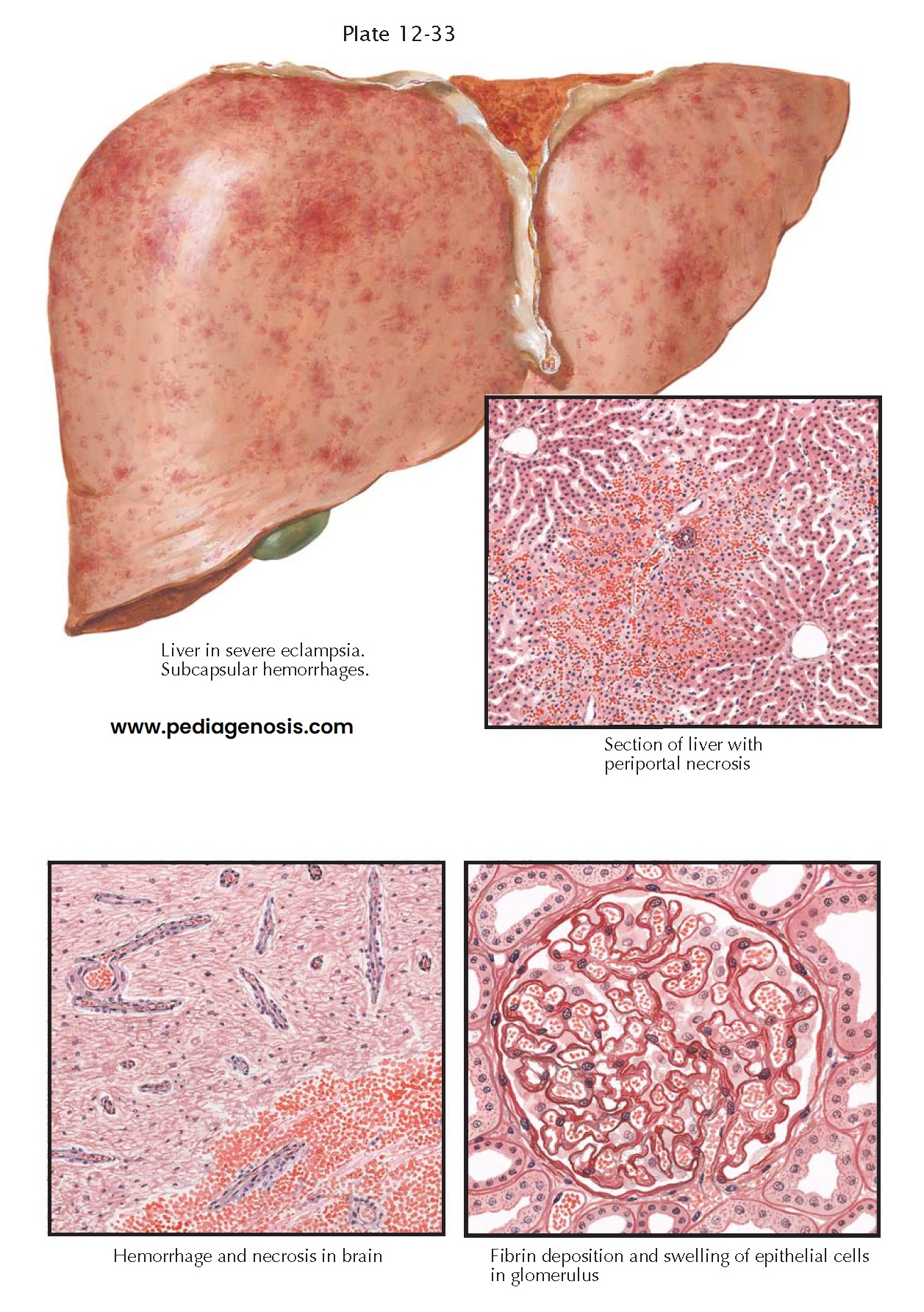 In typical cases, the liver is swollen and mottled with small hemorrhages. Microscopically, the sinusoids around the smaller portal areas are plugged with ﬁbrinoid material and surrounded by foci of hemorrhage and necrotic liver cells. Occasionally, midzonal necrosis is seen, but serial sections usually reveal continuity with larger periportal lesions. The condition may be wide- spread or may involve only a few subcapsular lobules.

Three types of renal lesions are associated with pre-eclampsia. The most common and characteristic one consists of narrowing of glomerular capillary lumina with thickening of the epithelial–endothelial glomerular membranes. This is known as glomerular capillary endotheliosis and results from swelling of endothelial cells. The afferent arterioles often appear to be stiff walled and are occasionally plugged with eosinophilic material. Obstruction of the blood ﬂow through the glomerular tufts may cause anoxic degeneration of the distal tubules. Occasionally, this phenomenon proceeds to necrosis, in which case the lesion is called lower nephron nephrosis. In fatal cases of preeclampsia, moderate degeneration of tubular epithelium has been a frequent ﬁnding, but actual necrosis is rare. Another, but less common, renal lesion, called bilateral cortical necrosis, results from severe vasoconstriction and necrosis of intralobular arteries, followed by symmetric bilateral infarction of renal cortical tissue. Although other diseases in which severe vasoconstriction plays a role have produced this renal lesion in both males and females, it has been found more frequently in cases of eclampsia than in any other condition.

The characteristic changes in the brain are edema and small foci of degeneration, both consequences of anoxia. After the onset of convulsions, petechial hemorrhages are common, and in fatal cases larger areas of hemorrhage and softening may appear. The capillaries and arterioles appear to be stiff walled and straight. More than the usual number are visible in microscopic sections, as though they had rolled out on the surface instead of being cut sharply by the microtome knife.

Edema of the subcutaneous tissues, lungs, and interstitial tissues of the viscera is present to varying extents in all cases. Likewise, small foci of degeneration and petechial hemorrhages are frequent, especially in the adrenals and myocardium.

All these lesions may be explained on the basis of widespread vasoconstriction, with signiﬁcant elevations in total peripheral resistance, enhanced responsiveness to angiotensin II, and subsequent reductions in renal blood ﬂow and glomerular ﬁltration rate compared to normal pregnancy. Although the physiologic mechanisms have been extensively studied during normal pregnancy in animal models, information regarding the mediators during preeclampsia has been limited because of the problems of performing studies during pregnancy. Although some animal models have been developed to study preeclampsia, information on the mechanisms involved in mediating the reduction in renal and hepatic function is lacking.

That severe vasoconstriction exists in this condition is evident from examination of the eye grounds and the renal as well as cerebral hemodynamics. Although the hypertension of preeclampsia resembles in many respects the malignant hypertension associated with renal disease, the renal lesions in the former condition seem to be the result rather than the cause of vasoconstriction. Recent observations have revealed a high incidence of lesions associated with intrauterine ischemia, which suggests that the source of the vasoconstrictor factor may be the ischemic intrauterine tissue or the placenta itself. Several lines of experimental evidence support the hypothesis of a central role for the placenta in preeclampsia.