Visual disturbances are very frequent in eclampsia and preeclampsia. (Ocular sequelae have been reported in up to one third of cases.) They range from slight blurring of vision to various degrees of temporary blindness. Other symptoms have also been noted, including photopsias, scotomas, and diplopia. These disturbances are thought to be caused by the arteriolar spasm of the retinal vessels together with ischemia, edema, and sometimes retinal detachment. In some patients with visual changes in preeclampsia, a diffuse increase in macular thickness has been documented. 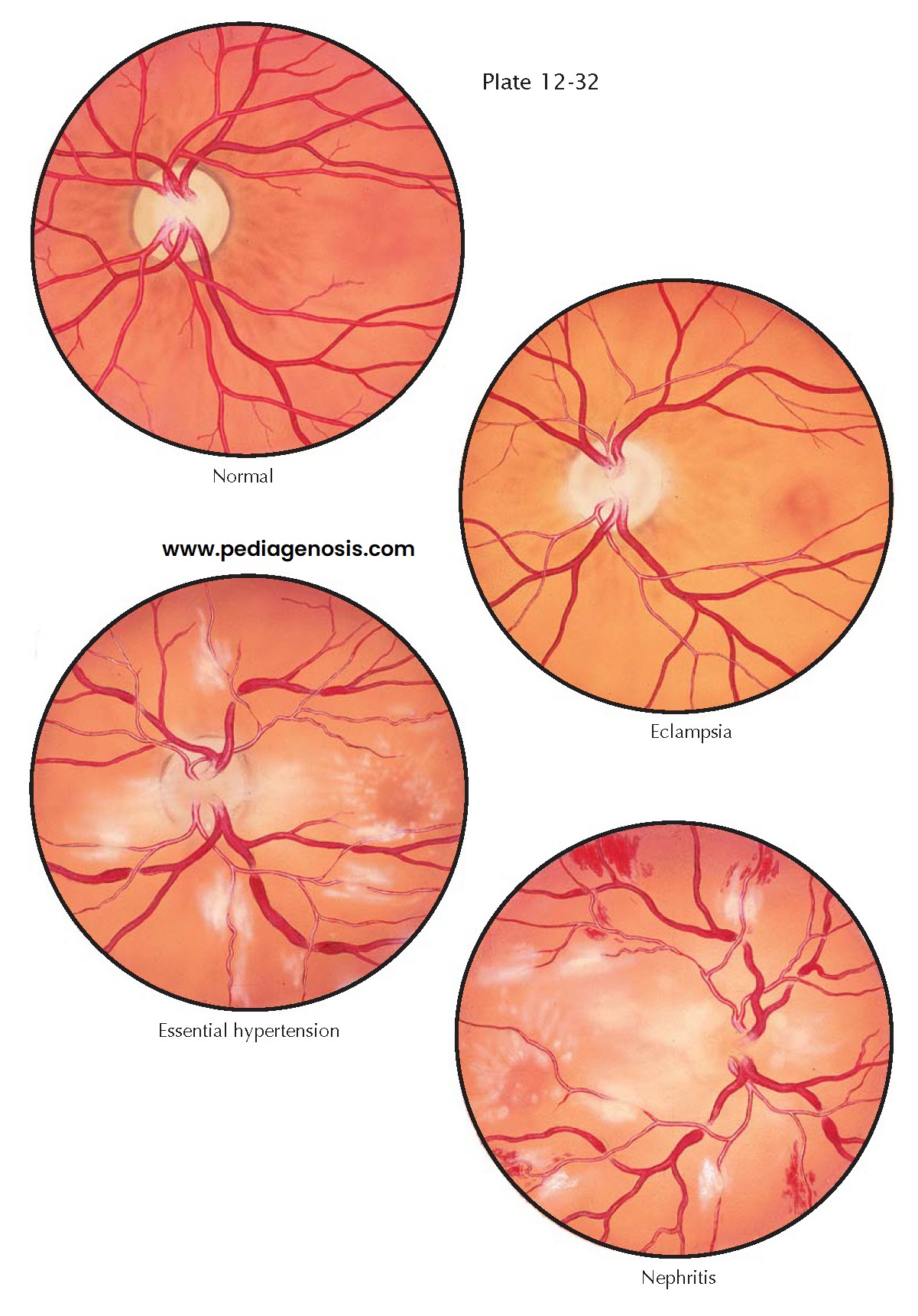 Edema of the retina may be seen occasionally in preeclampsia and eclampsia, but it is much less frequent than spasm of the vessels. The edema usually appears ﬁrst at the upper and lower poles of the disk and later progresses along the course of the retinal vessels. In rare instances, retinal edema becomes so intense that complete detachment of the retina occurs.

Hemorrhages and exudates are rarely seen in uncomplicated preeclampsia and eclampsia. They are more characteristic of chronic cardiovascular and renal diseases. Nerve ﬁber layer infarcts and vitreous hemorrhage secondary to neovascularization are also common. Despite this, most changes are reversible once preeclampsia resolves. Serous exudative retinal detachments may occur in severe preeclampsia or eclampsia. They tend to be bilateral, bullous, and associated with preeclampsia retinopathy changes. The underlying mechanism is most likely related to choroidal nonperfusion and resultant subretinal leakage. Most patients with serous detachments have resolution of symptoms within weeks after delivery.

Cortical blindness, although a rare complication, has been reported to cause vision loss in preeclampsia secondary to cerebral edema. This may result from vasospasm causing transient ischemia producing cytotoxic edema. It is also possible that preeclampsia causes increased permeability from circulatory dysregulation, thus providing vasogenic edema. Resolution of the changes associated with preeclampsia and the resultant cerebral edema usually result in visual recovery.

In benign essential hypertension, examination of the eye grounds reveals a different picture. The retinal arterioles are more narrowed and tortuous, and they present the aspect of silver or copper wire. Arteriovenous nicking is very frequent in essential hypertension and rarely seen in preeclampsia. Fresh and old exudates can be seen distributed in the retinal ﬁeld, resembling cotton wool. In essential hypertension, hemorrhages are not frequently seen. In malignant hypertension and in chronic kidney diseases, besides the arteriolar changes described above, a great number of fresh and old exudates can be observed together with patches of old and fresh hemorrhages. Choking of the disk is so marked in these cardiovascular and renal conditions that delineation of its contours may become very difﬁcult.