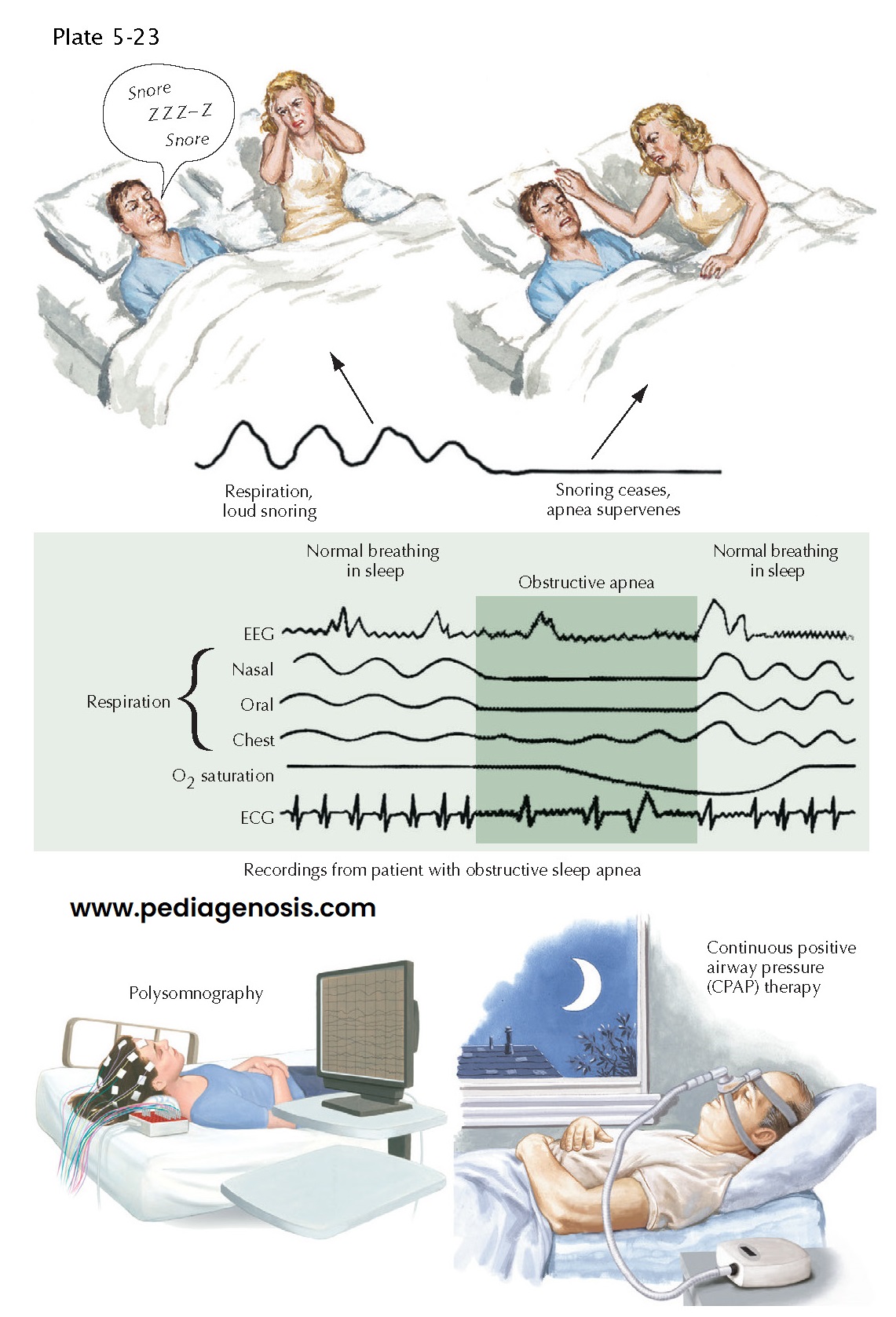 Sleep-disordered breathing includes a spectrum of disorders, ranging from snoring to frank cessation of air flow, or apnea, during sleep. Obstructive sleep apnea occurs when relaxation of the tongue and airway muscles during sleep causes collapse of the airway, resulting in snoring, reduction in air flow (hypopnea), or even total blockage of air flow (apnea). Patients with central sleep apnea have reduced drive to breathe during sleep (central sleep apnea). Central sleep apnea may occur as a congenital problem in children, where it may be caused by a mutation in the Phox2b gene, which is necessary for development of CO2 chemosensory neurons in the medulla. However, it can also be caused by damage to the medulla or spinal cord causing failure of automatic breathing during sleep (“Ondine’s curse”). Central sleep apnea also is often seen in older adults who have developed congestive heart failure or respiratory disease (causing waxing and waning Cheyne-Stokes respiration during sleep). In many older adult patients, a combination of central and obstructive sleep apnea may be seen, sometimes called complex sleep-disordered breathing. The typical patient with obstructive sleep apnea arouses after a brief interval of struggling to breathe, the airway opens, and breathing resumes. This cycle may repeat every few minutes all night. The patient often is unaware that the arousals are occurring but typically feels sleepy during the day. Sometimes the patient complains of aches and pains or impaired memory or cognitive function, which can be increased by sleep loss. Often the bed partner will first realize that something is wrong when snoring sounds become intolerable or notices the periodic loss of breathing. The episodes of apnea are often increased in frequency when the patient drinks alcoholic beverages or sleeps on his back. Obstructive sleep apnea is most common among older individuals, men, and those with obesity and large shirt collar sizes, but it is also seen in older women and in children and young adults who have enlarged tonsils or adenoids, anomalies of craniofacial structure that compromise airway diameter, or neuromuscular disorders that cause laxity of the airway muscles.

Clinical Presentation. Pronounced snoring, a classic indicator for possible sleep apnea is related to vibration of upper airway tissue. Apnea occurs when the upper airway obstruction becomes complete. There is decreased blood oxygen saturation with corresponding increased blood carbon dioxide levels leading to arousal from sleep. The patient is usually unaware of these events; however, the bed partner is aroused and under-standably frightened by the patient’s respiratory pause. Paradoxically, the majority of patients with obstructive sleep apnea do not report choking or gasping for breath and are unaware of their apneas. Although they may feel that the have slept well, they exhibit excessive daytime sleepiness, which results in lapses in attention and inappropriately falling asleep. Impairment of cognitive function may mimic depression or dementia, and children with sleep-disordered breathing show problems with attention and behavioral dyscontrol that may disrupt their schoolwork. Severe cases (≥30 episodes per hour) and possibly those with moderate degrees of apnea (15 to 29 episodes per hour) are at significantly increased risk for cardiovascular disorders, including hypertension, myocardial infarction, cardiac arrhythmias, and stroke. Hypertension may develop from elevated catecholamine levels caused by the apneas. In addition, the negative intrathoracic pressure caused by struggling to breathe may lead to increased secretion of aldosterone, promoting increased intravascular fluid volume. The elevated central venous pressure paired with increased intrathoracic negative pressure increases transmural forces affecting the heart, which may cause cardiovascular remodeling and alteration of cardiopulmonary physiology. Sleep loss also causes insulin resistance, which can predispose to diabetes and increased body mass, which further worsens the sleep apnea and hypertension.

Diagnosis and Treatment. An all-night sleep study is the best means to detect and quantify apneic events. Healthy adults may experience up to four apneas per hour of sleep at night; in children more than 1.5 events/ hour is considered abnormal. Treatment of obstructive sleep apnea begins with correction of anatomical abnormalities of the airway, including removal of enlarged adenoids and tonsils in children. Reduction of risk factors, such as obesity and drinking alcohol in the evening, may help. If this is not curative, continuous positive airway pressure (CPAP), which uses air pressure to splint open the airway during sleep, prevents apneas and reduces daytime sleepiness and cardiovascular risk. Patients with severe and moderate sleep apnea significantly benefit from CPAP use by improving daytime alertness and reducing cardiovascular risk. Often, the treated patient may comment that he had not realized how sleepy he was until he had experienced the results of treatment.