Subtrochanteric fractures of the femur occur in two separate age groups—in young adults as a result of high-energy injuries and in very elderly persons as a result of simple falls. The fractures occur just distal to the lesser trochanter (or may involve it) and with varying degrees of comminution. 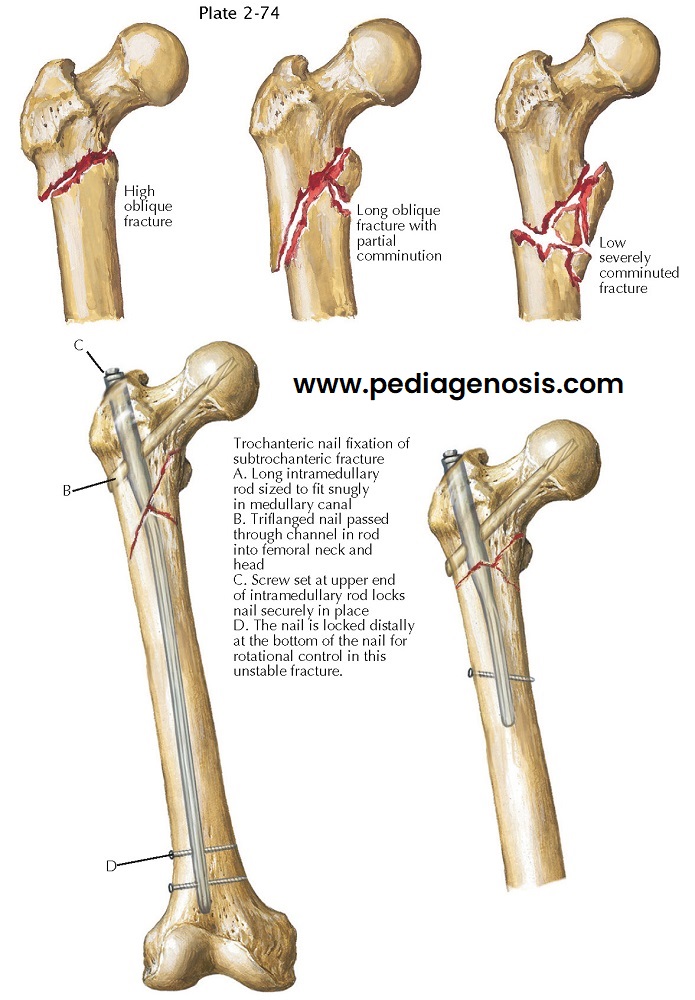 Subtrochanteric fractures are generally treated with internal fixation to allow early mobilization and rehabilitation of the patient. Closed treatment methods involving skeletal traction are rarely indicated with the advancement of modern fixation techniques.

Biomechanical analysis of the intact femur demonstrates that the highest compressive and tensile stresses on the femur are concentrated in the subtrochanteric region. Because of these very high forces, implant failure has been commonly seen with internal fixation of this type of fracture using a plate. Nonunion, mal-union, and implant failure occur more often with a subtrochanteric fracture than with any other type of femoral injury. Angled plate devices, long used to treat this injury, are more likely to fail than other implant devices; the implant often breaks opposite an area of medial comminution. For this reason, proper implant selection using a cephallomedullary device is essential. Because of problems with the use of nail plate devices, other intramedullary devices have been developed specifically for treating subtrochanteric fractures of the femur. The anterograde nail, often with a trochanteric entry point, is one of the most successful devices. The incidence of malunion and non-union has been reduced with the use of the nail configuration, because of its intramedullary position and firm fixation in the femoral head and neck.

Postoperative management depends on the quality of fixation, the quality of bone, and the stability of fracture reduction. Patients with good bone mass, minimal comminution, and good fracture stability are mobilized early from bed to chair and then to partial weight bearing using crutches for support. In patients treated with an intramedullary device, which helps distribute the load across the fracture site, weight bearing on the injured limb progresses more rapidly than in patients treated with a plate device. Older patients with osteoporotic bone are mobilized slowly from bed to chair. Full weight bearing on the fractured limb is allowed when clinical and radiographic evaluations show adequate fracture healing.