Taste and Other Visceral Sensory Inputs to the Hypothalamus

Taste and Other Visceral Sensory Inputs to the Hypothalamus 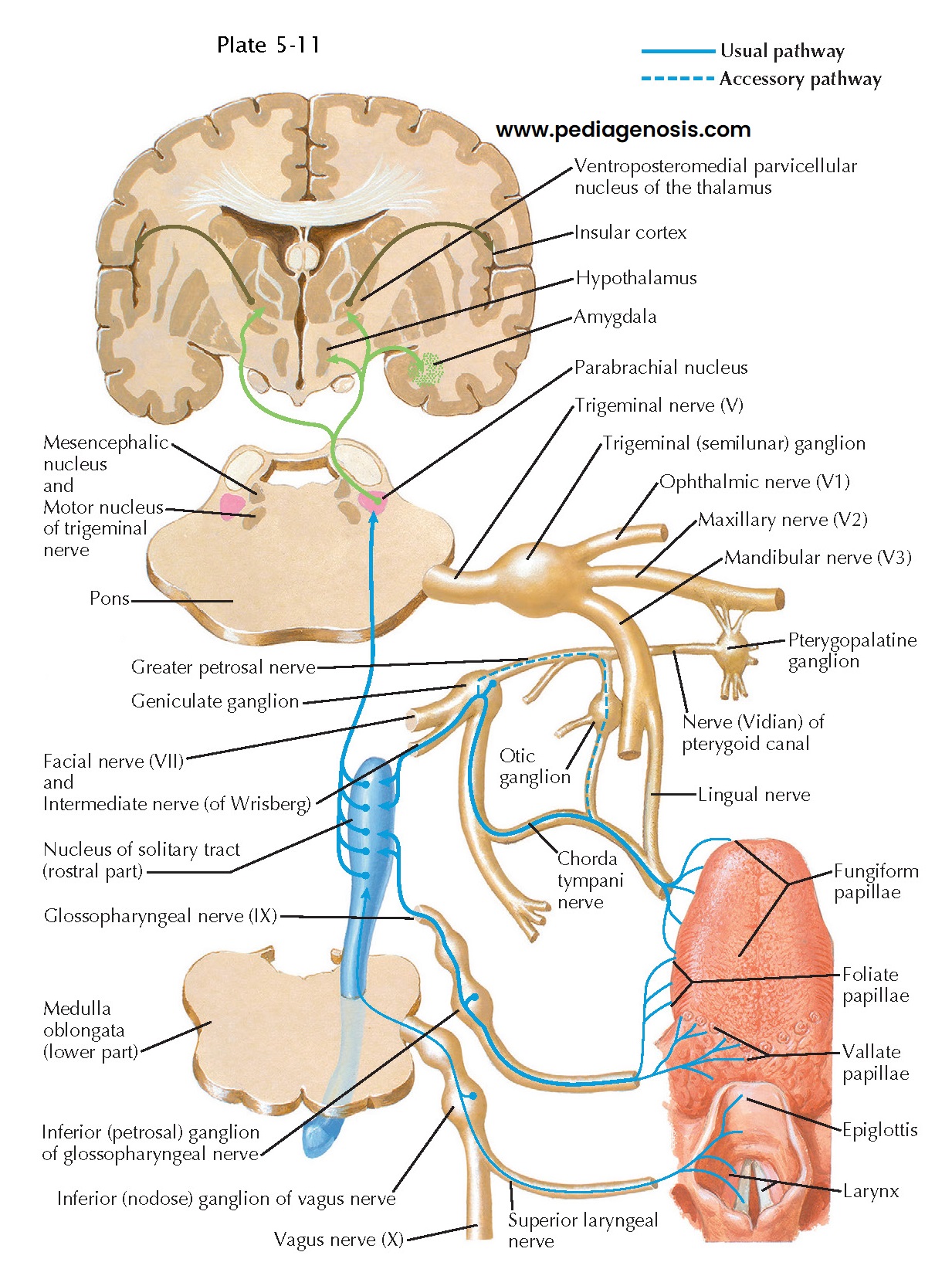 A special class of visceral sensory pathway provides taste information to the hypothalamus and other areas of the brain. Taste receptor cells are found in taste buds, located in clusters along the surface of the tongue. Different classes of taste receptors respond to different classes of chemicals in food, including acids (sour), sugars (sweet), sodium (salty), glutamate (an important amino acid component of proteins, whose taste is said to be “beefy” or “umame” in Japanese), and complex plant alkaloids that often warn of poisonous compounds (bitter). The taste receptor cells are innervated by sensory neurons from the facial (VII nerve, to the anterior two thirds of the tongue), glossopharyngeal (IX nerve, to the posterior tongue and tonsillar arches), and vagus (X nerve, to the posterior tongue and oropharynx) cranial nerves. Much like other somato- sensory systems, the gustatory sensory neurons are located in ganglia (geniculate for the facial nerve, petro- sal for the glossopharyngeal nerve, and nodose for the vagus nerve) and consist of pseudounipolar cells, with a single axon that bifurcates in the ganglion into a central and a peripheral branch. The central branches terminate in the rostral third of the nucleus of the solitary tract in the medulla. The axons end in a roughly topographic order with respect to the surface of the tongue (axons from the anterior two thirds of the tongue ending most rostrally). The nucleus of the solitary tract gives off local connections in the brainstem to reflex pathways for salivation and for regulation of biting, chewing, and swallowing activity.

Ascending axons from the nucleus of the solitary tract travel through the brainstem, and a large proportion of them synapse in the parabrachial nucleus. From there, axons continue on to the thalamus (for conscious appreciation of taste), amygdala (for taste associations), and hypothalamus (presumably for regulation of feeding). The inputs to the hypothalamus and amygdala are aug- mented by a smaller number of axons that reach these sites directly from the nucleus of the solitary tract. In primates, there is evidence that some axons from the taste portion of the nucleus of the solitary tract may reach the thalamus directly, without requiring a relay in the parabrachial nucleus. Taste neurons in the thalamus are located adjacent to the tongue somatosensory area, and they innervate the insular cortex, which is the primary taste cortex.

The posterior two thirds of the nucleus of the solitary tract receives inputs from other internal organs via the glossopharyngeal and vagus nerves. These terminate in a roughly topographic order, with gastrointestinal inputs in the middle part of the nucleus and cardiore- spiratory in the caudal part. The nucleus of the solitary tract provides local inputs to cell groups in the medulla that control gastrointestinal functions, including gastric acid secretion and gut motility as well as cardiovascular and respiratory reflexes (e.g., the baroreceptor reflex that stabilizes blood pressure when moving from a lying to a standing position, and the increase in both respiratory rate and blood pressure when there is a high level of carbon dioxide in the blood).

Other axons from the posterior two thirds of the nucleus of the solitary tract terminate in the parabrachial nucleus. Parabrachial neurons then contact the visceral sensory thalamus, which, in turn, projects to the insular cortex, where sensations such as gastric fullness or air hunger reach conscious appreciation. Other parabrachial outputs are joined by smaller numbers of axons from the nucleus of the solitary tract itself in projecting to the amygdala, where they may be involved in visceral conditioned reflexes. Parabrachial inputs to the hypothalamus may play a role in a wide range of functions, from regulation of behaviors such as feeding and drinking to control of secretion of hormones such as vasopressin (during hypovolemia) and oxytocin (during emesis).