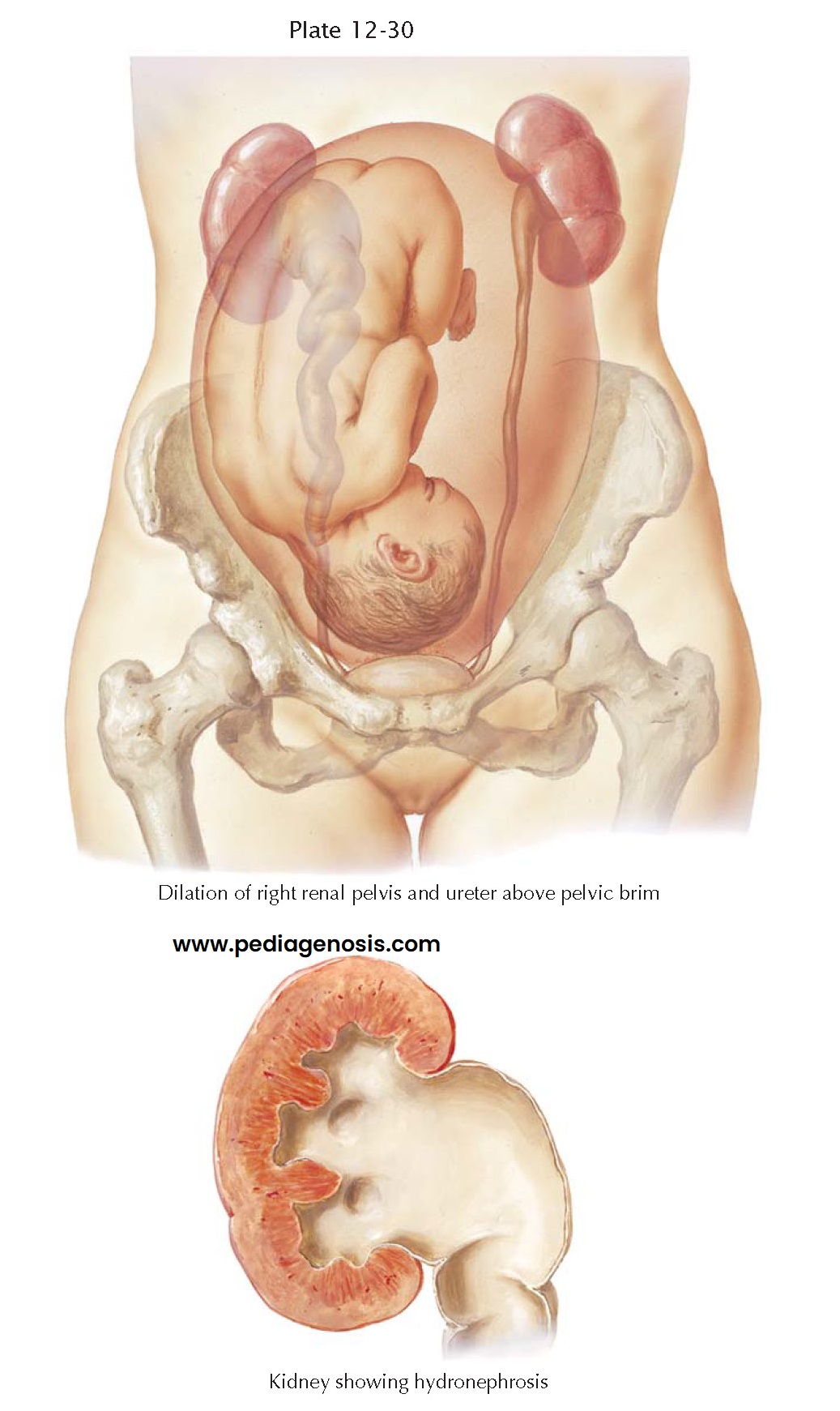 In most pregnant women, after the fourth month, the diameter of the upper third of each ureter has increased. The lumen, more than the wall, contributes to this ampliﬁcation, which is most pronounced in the region over the brim of the pelvis and, as a rule, is more marked on the right side than on the left. The genesis of this ureteral expansion is due to several factors working together: pressure on the ureter and the kidney by the gravid uterus produces a mechanical effect. Structural changes in the ureteral wall have been recorded, and x-ray studies have led to the assumption that the musculature loses its tone. Dilation and increased tortuosity of the ureters have been produced in experimental animals by the administration of estro- gens. This and the smooth-muscle–relaxing effect of progesterone emphasize that mechanical, neurogenic, and hormonal factors work together in bringing about this physiologic pregnancy change, which, in the great majority of pregnant women, does not lead to any recognizable functional disturbances. Following delivery, the ureters rapidly return to normal size.

For reasons not known, however, the dilation may reach degrees that interfere with normal function. Every ureteral dilation is accompanied by a certain degree of stasis, which, in a retrograde fashion, may affect the renal pelvis. Functional examinations and pyelography have demonstrated that during pregnancy the excretion time is delayed and that the ﬂow through the ureters slows down parallel to the tortuosity and enlargement of the ureter and the renal pelvis. These changes may cause the development of a marked hydroureter and hydronephrosis. In rare instances, all the consequences of hydronephrosis, such as ﬂattened calyces and atrophy of the renal parenchyma may become manifest. Ultrasonography can be used to document and assess the degree of ureteral and renal dilation present.

Infection of the upper urinary collecting system is a frequent occurrence in cases of hydronephrosis. Pyelitis or pyelonephritis and ureteritis are relatively frequent complications of pregnancy. They may occur without extreme ureteral dilation, and the infection may not extend to the kidneys. The incidence of infection in the urinary tract is greater in the later stages of pregnancy than earlier ones. Pyelitis may become manifest only after delivery, possibly because of damage to the ureters. Bacterial invasion of the ureteral mucosa is favored by ureteral dilation, urinary stasis, venous congestion, and edema. The exact route of infection in pyelonephritis in pregnant women has not yet been established. Bacterial invasion of the ureteral mucosa may occur through venous, lymphatic, or direct vesicoureteral reﬂux. The most frequent organism is bacterium Escherichia coli, which can be found in cultures of catheterized urine in more than 90% of cases.

The diagnosis of urinary infection is easy in the acute or more severe cases and should not cause difﬁculties in the milder or subacute forms. Clean-catch urine examinations during prenatal care may reveal infections in an early stage, although for a deﬁnite diagnosis a fresh specimen obtained by catheterization is preferred. The characteristic symptoms include back pain in the lumbar region, fever (usually high), vomiting, frequent urination with the sensation of burning, and leukocytosis. Unless treated promptly and adequately, pyelonephritis not only constitutes a serious complication of pregnancy but also, because of its tendency to chronicity and recurrences, may produce irreversible renal changes that may cause renal insufﬁciency and hypertension.

Cystitis usually accompanies infection of the upper urinary pathways. The severity of cystitis varies from a mild form without ureteritis to extensive ulcerative cystitis and ureteritis. Cystitis and urethritis will generally prompt the classic symptoms of frequency, urgency, and dysuria.