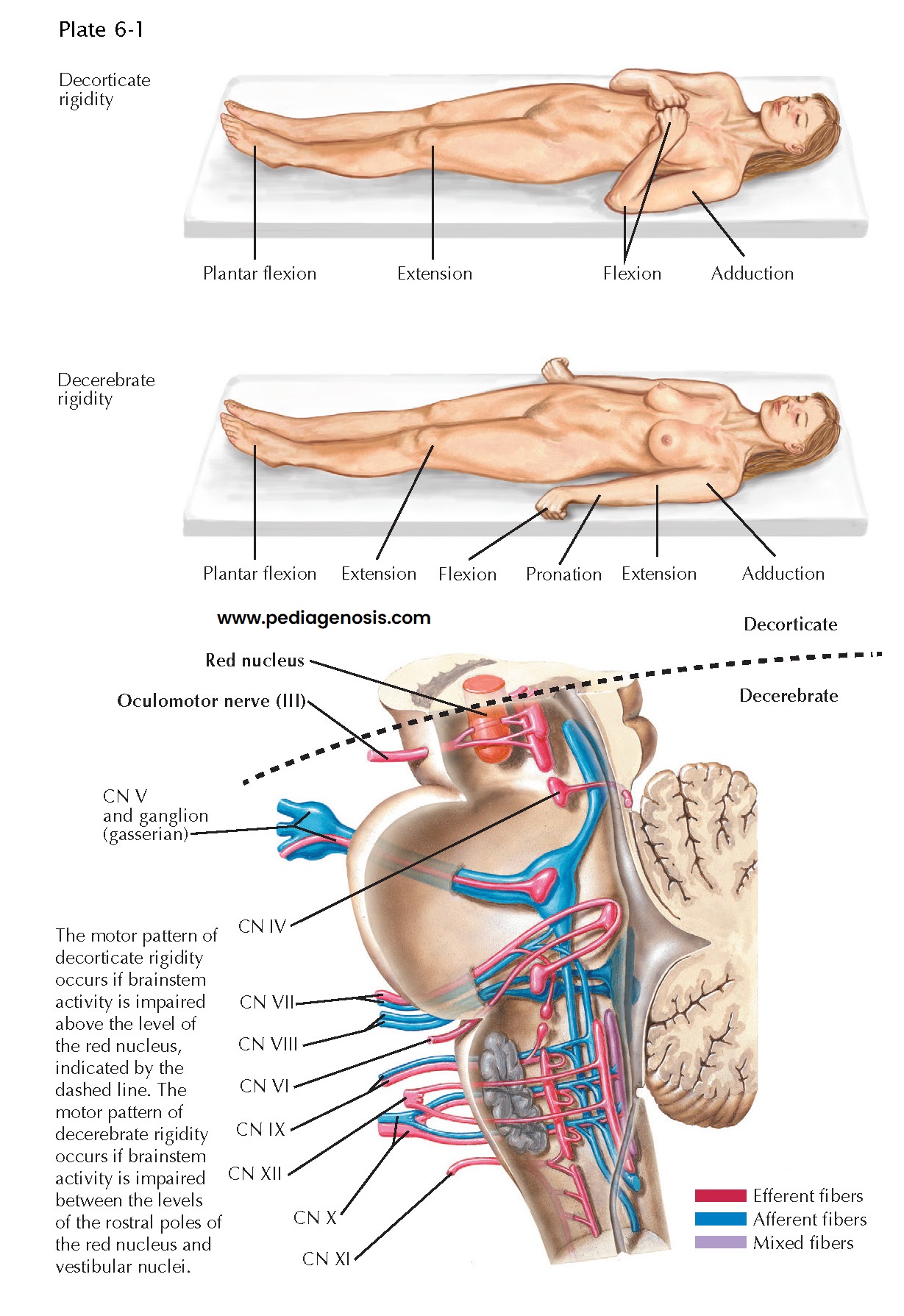 The term consciousness refers to a state of awareness of self and one’s environment. Assessing consciousness in another person relies on judging that individual’s performance or behavior in some mental function and arousal or response of awakening to a stimulus. The word coma originates from the Greek koma (κωμα) and komatos meaning sleep, and deep sleep, respectively.

In this section, the use of the word is as a term to describe a potentially reversible state of unarousable unresponsiveness, which is not sleep at all. By this strict definition, there should not be grades of coma, but many physicians recognize the usefulness of describing and summating a patient’s behavioral response in three domains of function: motor and verbal response and eye opening (see Plate 14-15 on the Glasgow Coma Scale score). However, equating the degree of abnormal motor response with a depth of coma is confusing because neural structures regulating motor function and consciousness are independent. That said, it is common practice to use the clinical integrity of the motor cortex and brainstem nuclei, and their respective projections, as an indication of the level of impairment.

Appropriate localizing and flexor responses in a comatose patient imply that sensory pathways are functioning and that the pyramidal tract from the cerebral cortex to effector is functioning at least partially (see Plate 6-5). When both sides are tested, unilateral absence of responses is consistent with interruption of the corticospinal tract somewhere along its length. Loss of response on both sides may reflect a lesion in the brainstem that interrupts the corticospinal tracts bilaterally or indicates injury to the pontomedullary reticular formation and associated extrapyramidal pathways. Inappropriate motor responses depend on the level of brainstem injury, as demonstrated by three main responses to a painful stimulus: decorticate rigidity, decerebrate rigidity, and decerebrate changes in the arms combined with flexor responses in the legs.

Decorticate rigidity consists of flexion of the arms, wrist, and fingers, with adduction in the upper extremity and extension, internal rotation, and plantar flexion in the lower extremity. This motor pattern occurs if brainstem activity is impaired above the level of the red nucleus because the red nucleus has a strong influence on upper limb flexion. It occurs with lesions involving the corticospinal pathways at the internal capsule, cerebral hemisphere, or rostral cerebral peduncle.

Decerebrate rigidity consists of opisthotonus with the teeth clenched, the arms extended, adducted and hyperpronated, and the legs extended with the feet plantar flexed. This motor pattern occurs if brainstem activity is impaired between the levels of the rostral poles of the red nucleus and vestibular nuclei (rostral midbrain to midpons), as seen during rostral-caudal deterioration with transtentorial herniation, expanding posterior fossa lesions, or neurotoxicity of the upper brainstem. It occurs because of the reduction in extensor inhibition normally exerted on the reticular formation by the cerebral cortex. As a result, the spinal extensor motor neurons are driven by extensor-facilitating parts of the reticular formation that are activated by a painful stimulus. The lateral vestibular nuclei are also intimately involved because, experimentally, extensor posturing is greatly reduced when the lateral vestibular nuclei are ablated. Decerebrate rigidity or posturing in the arms combined with either flaccidity or weak flexor responses in the legs is a motor pattern that is found in patients with extensive brainstem damage extending down to or across the pons at the trigeminal level.