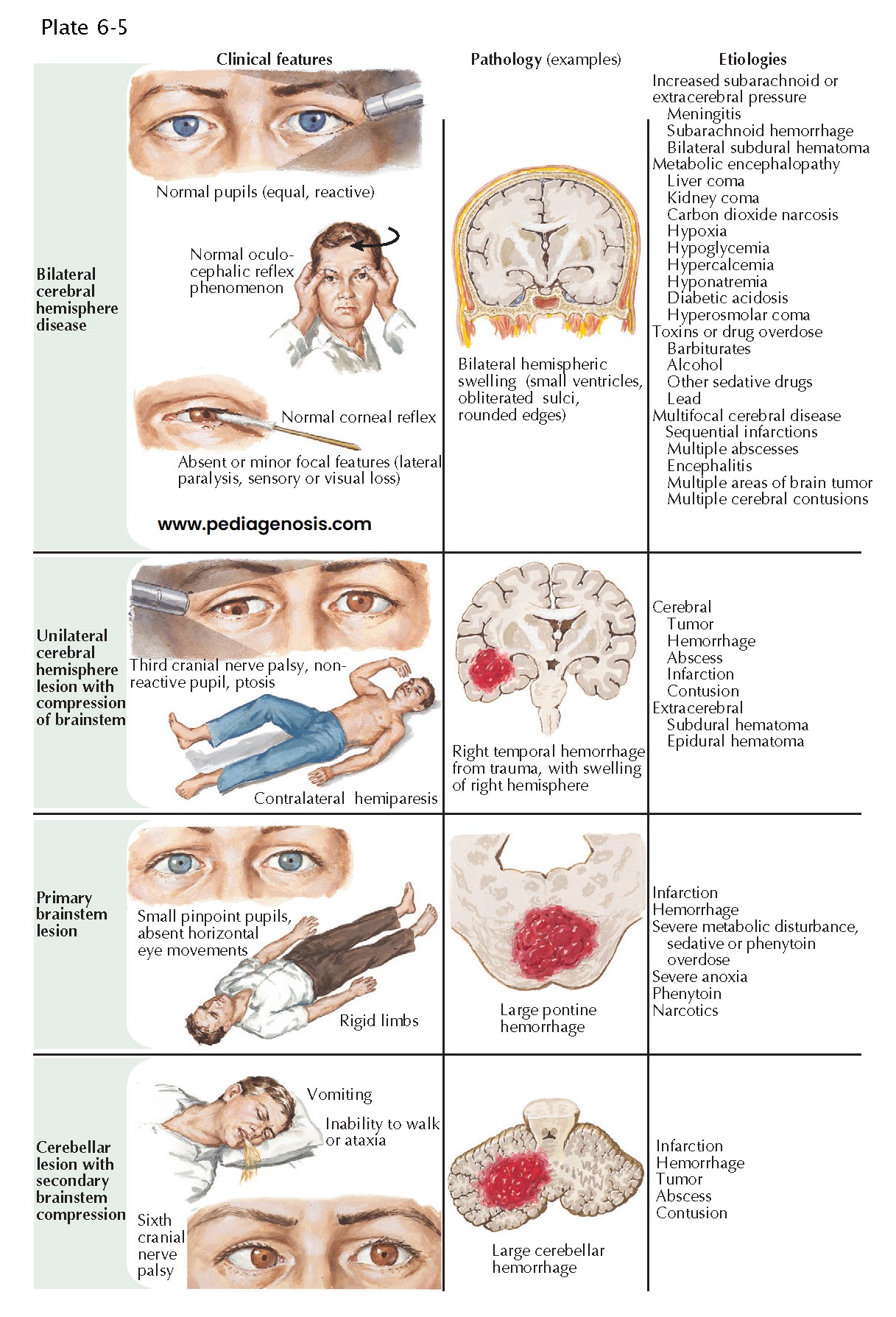 When coma is caused by bilateral cerebral hemisphere disease, swallowing, yawning, and spontaneous breathing are normal. The eyes rove spontaneously from side to side, and the limbs move symmetrically to stimulus. Pupillary and oculomotor reflexes are preserved. Toxic and metabolic disorders are the most common cause of coma resulting from bilateral hemisphere dysfunction. Encephalitis, hemorrhage, or infection in the meninges and subarachnoid space can also adversely affect bilateral hemisphere function. Although infarcts, hemorrhages, tumors, or abscesses can involve both hemispheres, the neurologic deficit becomes bilateral only sequentially.

When a hemispheric lesion compresses the brain-stem, the patient usually has signs or symptoms of hemisphere dysfunction, such as hemiparesis. Any space-occupying lesion, such as subdural hematoma, infarction, hemorrhage, or tumor, may compress the rostral brainstem and cause coma. As the lesion enlarges, intracranial pressure rises, and headache, vomiting, decreased alertness and papilledema develop. Signs of rostral brainstem diencephalic dysfunction follow. The midbrain and pons are disrupted sequentially, and signs of lower brainstem failure are added to dysfunction of rostral structures.

An intrinsic brainstem lesion can cause coma by compromising the function of the medial tegmental structures bilaterally. Primary diencephalic brainstem lesions are usually due to stroke, either hemorrhagic or infarction. Head trauma may also directly injure the brain-stem. In midbrain lesions, the pupils are dilated or in midposition, and bilateral oculomotor nerve palsy occurs. The eyes rest downward and outward and do not adduct or move vertically. Decerebrate posturing of the limbs is present. Pontine infarct or hematoma cause small, poorly reactive pupils and impaired vertical gaze. The eyes may rest downward and inward, and one eye may be lower than the other. Brainstem function rostral to the lesion is preserved. Pontine lesions cause small, reactive pupils, failure of horizontal eye movements, preservation of vertical eye movements (sometimes with spontaneous bobbing), and decerebrate posturing. Medullary lesions may compromise vasomotor control and breathing. Toxic disorders affecting the brainstem and cerebral hemispheres at multiple levels cause signs inconsistent with any single anatomic locus.

Cerebellar space-occupying lesions cause ataxia and vomiting, often followed by abducens (cranial nerve VI) nerve or lateral gaze palsy to the side of the lesion. Signs of lower brainstem dysfunction in the pons and medulla then develop.

If a cerebral or cerebellar lesion compresses the brain-stem, immediate treatment is required to avoid irreversible injury. With a primary brainstem lesion, the situation is equally urgent. Neuroradiologic investigations are critical in determining the nature and extent of pathology. Endotracheal intubation, controlled mechanical ventilation, and osmotic diuresis are undertaken while cranial computed tomography (CT) is performed to determine whether the patient requires immediate surgical decompression, cerebrospinal ventricular drainage, or hematoma evacuation as lifesaving measures.

Bilateral cerebral hemisphere disease is usually treated medically rather than surgically. It is often the result of metabolic encephalopathy from exogenous intoxication, for instance, drug overdose, alcohol intoxication, or overmedication. Endogenous intoxication is caused by organ failure (the lungs and carbon dioxide narcosis; the liver and hyperammonemia; the kidney and uremia), hyperglycemia, hypercalcemia, or hypernatremia, or by insufficiency of endogenous or exogenous, for instance, hypoglycemia, hypothyroidism, ypocalcemia, or hyponatremia.