In 1937, Sheehan first described the development of pituitary infarction in the setting of hemorrhagic shock occurring after delivery. This entity is much less commonly seen in developed countries today, likely as a result of modern advances in obstetric care. 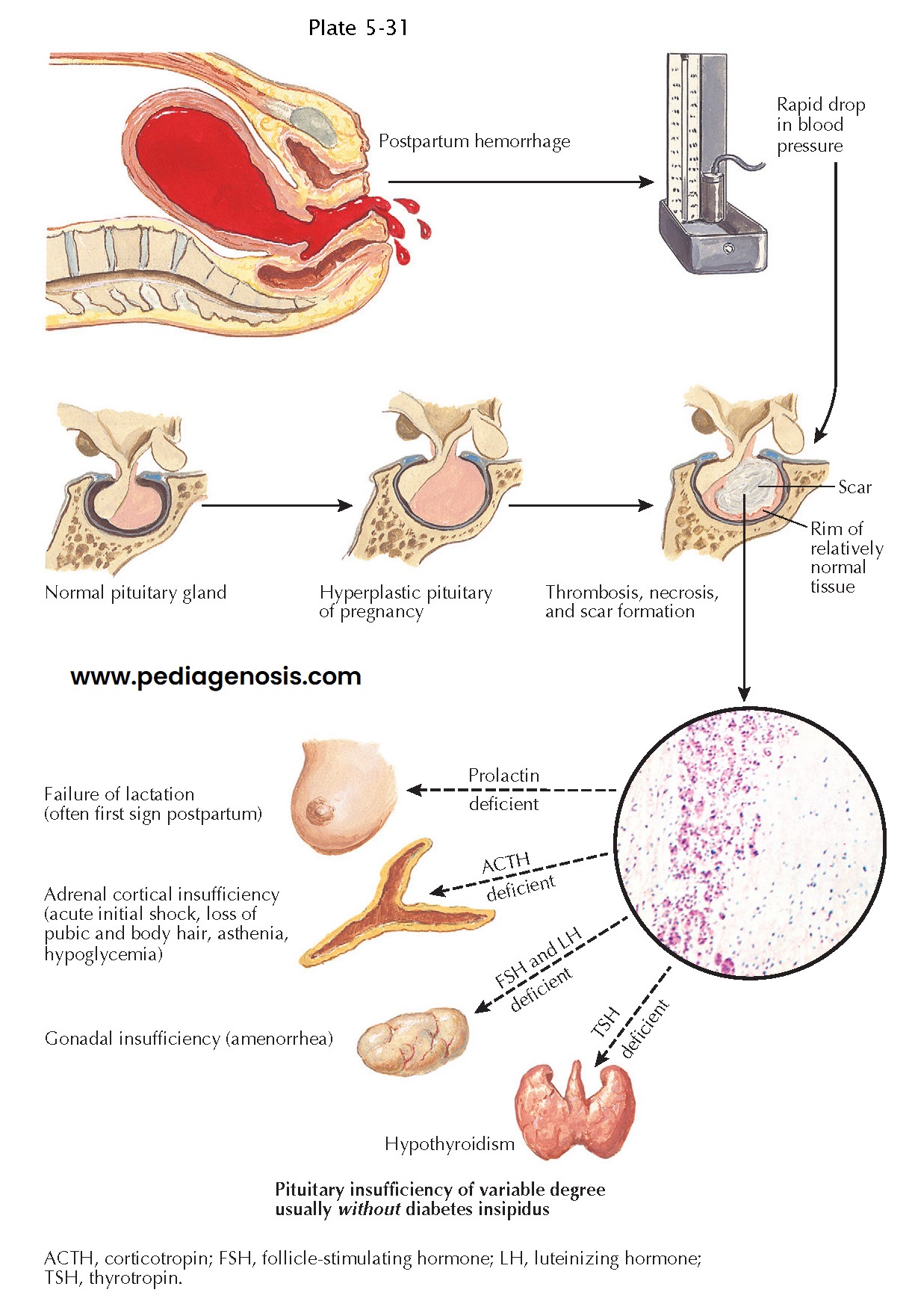 To understand the development of postpartum pituitary infarction, one has to consider that the pituitary gland becomes hyperplastic (approximately doubling in mass) during pregnancy as a result of progressive lactotroph hyperplasia occurring until term. Because there is no concurrent increase in blood supply to the pituitary, lactotroph hyperplasia makes the gland more vulnerable to vascular insults during pregnancy and the peripartum period. To highlight the important role of pituitary hyperplasia in the pathogenesis of infarction, it may be noted that pituitary infarction is very rare in nongravid patients in shock. The precise role of vascular spasm, thrombosis, and vascular compression as causative factors in the pathogenesis of Sheehan syndrome is still debated, but the condition ultimately involves infarction of the anterior pituitary lobe as a result of severe decrease in blood flow through the gland.

Anterior hypopituitarism of varying severity occurs in patients with Sheehan syndrome, depending on the extent of anterior lobe infarction. Loss of 90% of adenohypophyseal cells frequently leads to life-threatening pituitary failure, whereas loss of 50% to 70 % of anterior pituitary cells generally leads to partial hypopituitarism. Central hypoadrenalism may result in shock that is refractory to volume expansion and vasopressor administration. If loss of pituitary function is partial and/or less severe, initial symptoms may be more subtle, including failure to lactate and involution of breasts, followed by postpartum amenorrhea. Other symptoms may include fatigue, weight loss, lack of appetite, nausea, dizziness, and loss of axillary and pubic hair.

Additional risk factors include type 1 diabetes mellitus and sickle cell disease. In developed countries, lymphocytic hypophysitis, occurring in the third trimester of pregnancy or the postpartum period, has become more common than Sheehan syndrome as a cause of new onset hypopituitarism in pregnancy and the puerperium.

Once suspected, the diagnosis involves assays of systemic levels of target gland hormones, including morning serum cortisol, free thyroxine, estradiol, and gonadotropins. Serum prolactin levels may be very low in these patients. Stimulation testing may be needed to examine adrenocortical reserve and is essential in order to evaluate growth hormone secretion. Standard replacement therapies for pituitary hormone deficiencies are advised. In particular, prompt glucocorticoid replacement can be lifesaving. However, recovery of pituitary function is very uncommon.