Nail disorders are frequently encountered in the clinical setting. They can occur secondary to an underlying systemic disorder or as a primary disease of the nail unit. The nail unit consists of the nail matrix, bed, and plate and the proximal and lateral nail folds. Disorders of the nail plate and nail bed can manifest in a variety of ways. Systemic disease can manifest through changes in the nail unit. Beau’s lines and Mees’ lines of the nail are two nail findings seen in systemic disease. Beau’s lines are caused by a nonspecific halting of the nail matrix growth pattern, and Mees’ lines are specific for heavy metal toxicity. Dilation of the capillaries of the proximal nail fold or cuticular erythema can be a sign of connective tissue disease. The complete skin examination should also include an examination of the nails, because they offer insight into the patient’s health.

One of the most serious nail unit disorders is melanoma of the nail matrix. Melanoma may manifest as a linear, pigmented band along the length of the nail. As time progresses, the proximal nail fold and hyponychium may also become pigmented and involved with melanoma. The finding of pigment on the proximal nail fold has been termed Hutchinson’s sign. This sign is not seen in subungual hematomas. All new pigmented nail streaks should be evaluated and a biopsy considered. The biopsy requires nail plate removal and retraction of the proximal nail fold. The biopsy of a pigmented nail streak is performed within the nail matrix. Biopsies of the nail matrix may lead to a thinner nail or to chronic nail dystrophy due to disruption of the matrix. Subungual melanoma tends to be diagnosed late, because these tumors are easily overlooked or passed off as a subungual hematoma. It is critically important to differentiate the two.

Onychocryptosis (ingrown nail) is almost universally seen in the great toenail. It is caused by burrowing of the lateral portion of the nail plate into the lateral nail fold. As the nail punctures the lateral nail fold, it sets off an inflammatory reaction that causes edema, redness, pain, and occasionally purulent drainage. Secondary infection is common. Ambulation may become difficult because the pain forces the patient to avoid pressure.

Paronychia is a nail fold infection with either a bacterial agent (as in acute paronychia) or a fungal agent (in chronic paronychia). Acute paronychia manifests with redness and tenderness of the nail fold. The redness and edema continue to expand, causing pain and eventually purulent drainage. Removal of the cuticle or nail fold trauma may lead to an increased risk for this infection. Staphylococcus aureus and Streptococcus species are the most frequent etiological agents. Chronic paronychia typically is less inflammatory and manifests with redness and edema around the nail folds. Many digits may be involved. At presentation, patients typically report that they have been having difficulty for longer than 6 to 8 weeks. Tenderness is much less significant than in acute paronychia. Chronic paronychia is usually caused by a fungal infection of the nail fold with Candida albicans. Individuals who work in occupations in which their hands are constantly exposed to water are at higher risk for chronic paronychia. Therapy includes topical anti-fungal and antiinflammatory agents.

A felon is often confused with acute paronychia, but it is a soft tissue infection of the fingertip pulp. It may arise secondary to an acute paronychia. The clinical findings are those of a swollen, red, painful finger pad. The treatment is surgical incision and drainage together with oral antibiotics to cover S. aureus and Streptococcus species.

When it is curetted off, the white areas of fungal involvement are found to affect only the outermost portion of the nail plate. The material is a combination of fungal elements and nail keratin. Therapy includes curetting the white involved portion of the nail and applying a topical antifungal agent for at least 1 month. Distal and lateral subungual onychomycosis manifests with thickened, yellow, dystrophic appearing nails with subungual debris. There are varying amounts of onycholysis (nail plate lifting off the nail bed). One nail may be solitarily involved but it is more common for several nails to be involved and for the surrounding skin to be involved with tinea manuum or tinea unguium. Fungal nail infections are much more frequently seen on the toenails than on the fingernails. The nails can become painful, especially with ambulation. Occasionally, the entire nail is shed as a result of significant onycholysis, and the nail that regrows will again be involved with onychomycosis. The thick and dystrophic nails may become a passage for bacterial invasion of the body. This is especially true in patients with diabetes. Bacteria can gain entrance into the skin and soft tissue via the abnormal barrier between nail and nail fold, and this can lead to paronychia, felon, and the most serious complication, cellulitis. Distal and lateral subungual onychomycosis almost always needs to be treated with an oral antifungal medication for any chance of a cure. Topical agents may be helpful in limited nail disease, but their use is typically limited to an adjunctive role. Oral azole antifungals, griseofulvin, and terbinafine have all been used, with similar results. Psoriasis can affect the nails in many ways. Nail involvement appears more frequently in patients with severe disease and in those with psoriatic arthritis. The nails can show oil spots, pitting, ridging, onycholysis, and onychauxis (subungual hyperkeratosis). The oil spots are represented by a brownish to yellowish discoloration under the nail plate and associated onycholysis. The discoloration is caused by deposition of various glycoproteins into the nail plate. Nail pitting can be seen in other conditions besides psoriasis, such as alopecia areata; it is caused by parakeratosis of the proximal nail matrix, which is responsible for producing the dorsal nail plate. Ridging and onychauxis is caused by the excessive hyperkeratosis of the nail bed, which is directly caused by psoriasis. Therapy for psoriatic nails can involve intralesional steroid injections or use of systemic agents to decrease the abnormal immune response that is driving the psoriasis. Onychogryphosis (“ram’s horn” nail deformity) manifests with an unusually thickened and curved nail that takes the shape of a ram’s horn.

A plethora of nail changes may be seen in response to systemic disease. Beau’s lines are horizontal notches along the nails that may be caused by any major stressful event. The stressful event typically is induced by prolonged hospitalization, which causes temporary inadequate production of the nail bed by the nail matrix. It is entirely corrected spontaneously as the individual improves. Mees’ lines are induced by heavy metal toxicity, most commonly from arsenic exposure. They appear as a single, white horizontal band across each nail. Mees’ lines have also been reported in cases of malnutrition. Terry’s nails is the name given to nail changes seen in congestive heart failure and cirrhosis of the liver: More than two thirds of the proximal nail plate and bed appear dull white with loss of the lunula. Half-and-half nails, also called Lindsay’s nails, are seen in patients with chronic renal failure. The proximal half of the nail is normal appearing, whereas the distal half has a brown discoloration. Yellow nail syndrome manifests with all 20 nails having a yellowish discoloration and increased thickness of the nail plate. This syndrome is almost always seen in association with a pleural effusion, often secondary to a lung-based malignancy. 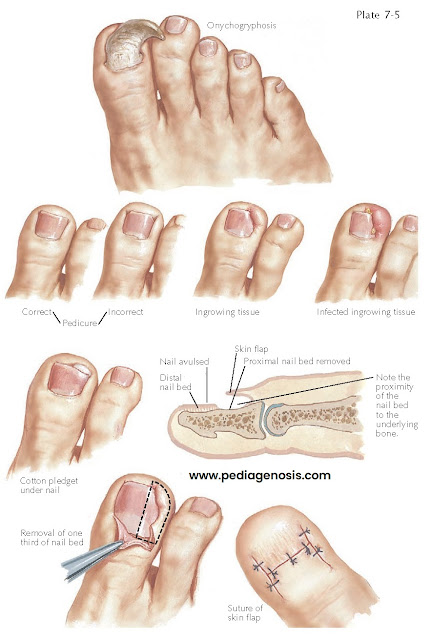 Koilonychia is one of the most easily recognized deformities of the nail; it is caused by iron deficiency. The nail plate develops a spoon-shaped, concave surface. Splinter hemorrhages may be a sign of bacterial endocarditis. Clubbing, which is defined as loss of Lovibond’s angle, is typically caused by chronic lung disease. The nail unit can manifest disease in many ways, and awareness of the various nail signs can help the clinician diagnose and treat these conditions.