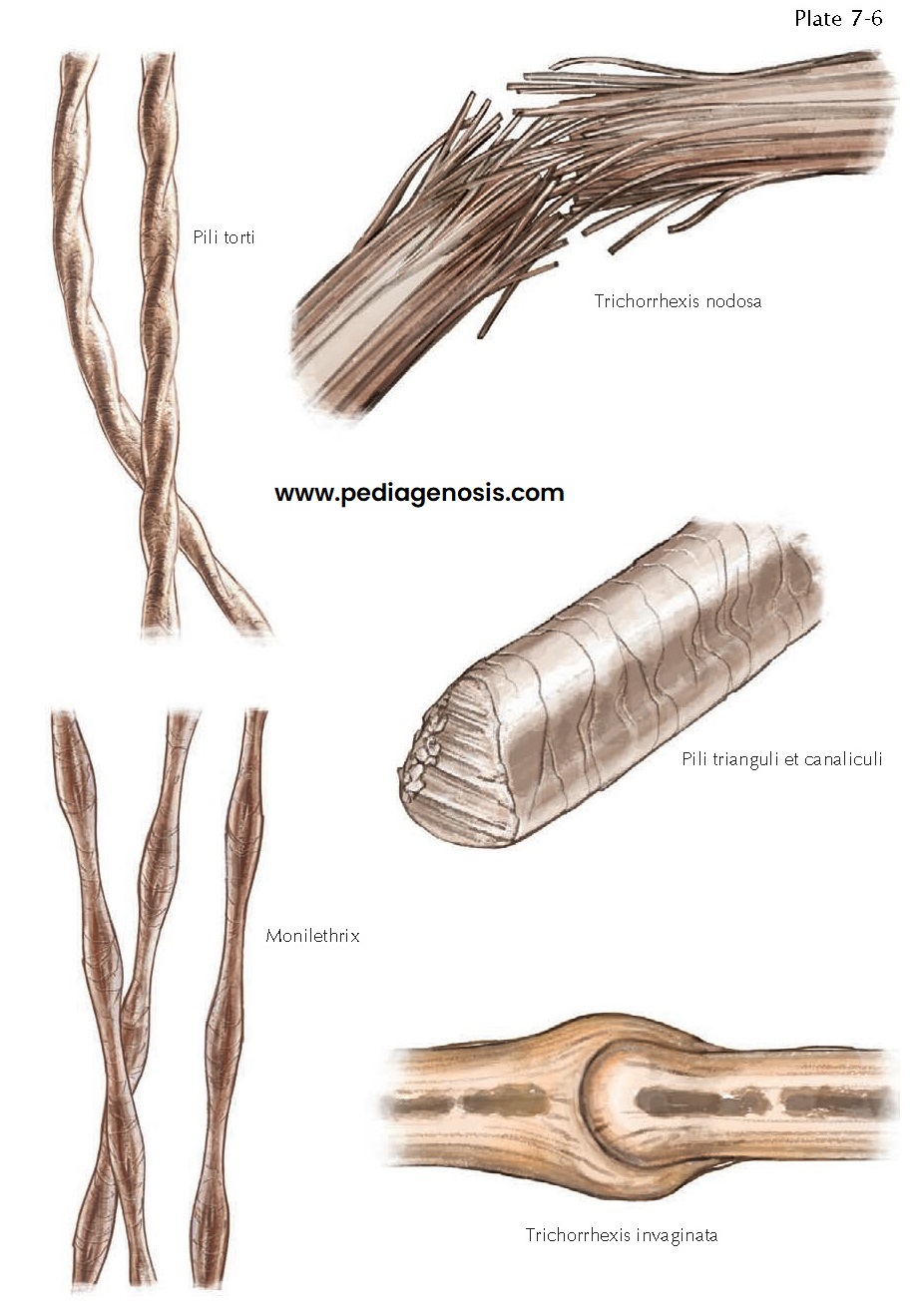 There are a wide variety of hair shaft abnormalities. Most are nonspecific clinical findings that can be seen in a multitude of underlying conditions, as well as in the normal individual. Trichoptilosis, known by the lay term “split ends,” is probably the most common hair shaft abnormality in humans. It is nonspecific and is not associated with any particular underlying syndrome. Trichoptilosis is believed to be caused by excessive trauma to the distal hair shaft. Trichorrhexis nodosa is another hair shaft abnormality that can be seen in individuals with no underlying disease state. A few highly specific hair abnormalities are indicative of particular disorders; for example, pili trianguli et canaliculi and trichorrhexis invaginata are seen only in uncombable hair syndrome and Netherton syndrome, respectively. The astute clinician uses knowledge of hair shaft abnomalities to help form a differential diagnosis and in some cases to confirm a diagnosis.

Pili torti is also known as “twisted hair” or “cork- screw hair.” The hair twists on its axis in a corkscrew pattern. This twisting leads to increased pressure on the hair shaft, which results in early breakage and short, brittle hair. The involvement is almost exclusively on the scalp. Pili torti is nonspecific and can be found in a number of genetic skin conditions, including Björnstad syndrome, Menkes syndrome, and Crandall syndrome. It can also be seen as a primary hair disease with no underlying associations.

Monilethrix is a highly specific hair shaft abnormality. The hair has a beaded or undulating appearance, with nodes interspaced at regular intervals by abnormally thin hair. It is inherited in an autosomal dominant fashion and is caused by a mutation in the hair basic keratin 6 gene ( HB6), which is officially known as keratin 86 (KRT86). The hair is fragile and breaks in the thinned internode regions. The internode regions are devoid of pigment, and this feature is used to discriminate this condition from pseudo-monilethrix. There is no known therapy. Many afflicted individuals improve after puberty. It is almost never associated with systemic disease.

Trichorrhexis nodosa is a completely nonspecific finding that may be seen in healthy individuals. This hair shaft abnormality has been described as “broom-stick hair” because of the appearance of the distal end of the broken hair, which resembles the bristles of a broom. Trichorrhexis nodosa is the most frequent reason for hair breakage. Trauma to the hair is causative. This trauma can be self-induced by rubbing or twisting, which results in fracturing of the hair and the appearance of trichorrhexis nodosa. This finding on microscopic examination can be helpful in evaluating hair loss secondary to trichotillomania or chemical-induced alopecia.

Pili trianguli et canaliculus, also termed “spun glass hair,” is the diagnostic finding in uncombable hair syndrome. This rare and highly unusual syndrome is associated with no underlying ill effects on the afflicted individuals. The hair is uncontrollable and impossible to comb straight. This effect is related to the abnormal triangular shape of the hair shaft as well as changes in the direction of the hair, which occur at uneven intervals. The condition is inherited in an autosomal dominant pattern and is believed to be the result of an abnormal inner root sheath. No therapy is needed, and most children with this condition spontaneously improve over time. The hair shafts appear almost tri-angular under electron microscopy.

Trichorrhexis invaginata is seen only in patients with the autosomal recessive Netherton syndrome. This hair shaft abnormality has been termed “bamboo hair” because of its resemblance to the growth rings of a bamboo plant. Another descriptive term is “ball and socket hair,” because it appears that the distal portion of the hair invaginates into the proximal hair cortex. The hair is brittle and breaks easily, leading to alopecia. The eyebrow hair is the best place to look for trichorrhexis invaginata. Netherton syndrome is a multisystem disease caused by a mutation in the SPINK5 gene that is associated with erythroderma, alopecia, and elevated levels of immunoglobulin E. Ichthyosis linearis circumflexa is the name for the migratory, irregular, serpiginous patches and plaques with a double-edged scale that are seen only in Netherton syndrome. The SPINK5 gene encodes the serine protease inhibitor, Kazal type 5 protein, which is important in epithelial desquamation.