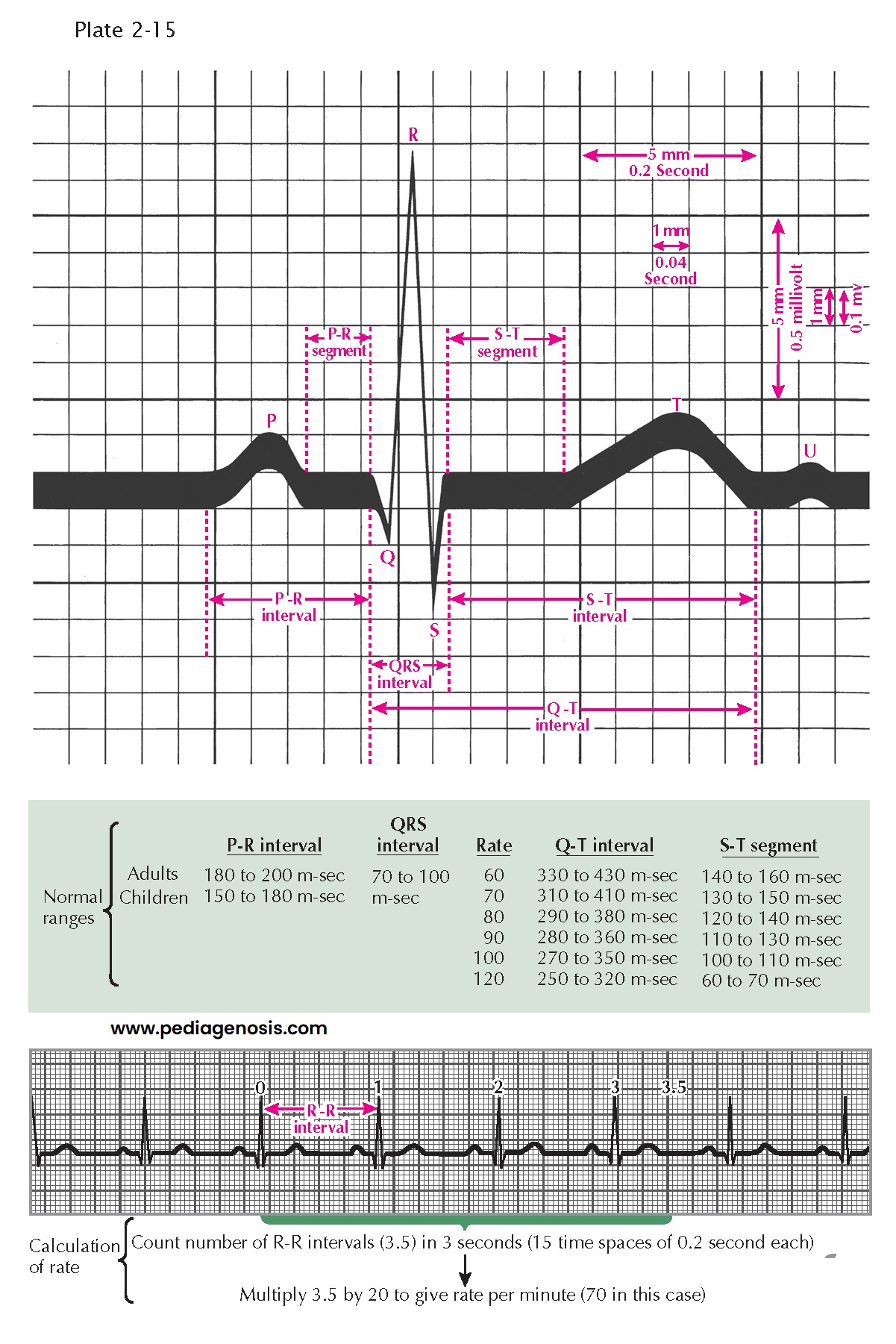 An electrocardiogram is a graphic representation of voltage variations plotted against time. The variations result from the depolarization and repolarization of the cardiac muscle, which produces electric fields that reach the surface of the body where electrodes are located. An electrocardiographic machine is a galvanometer that records voltage variations, usually on paper tape. The first such machine was developed by Wilhelm Einthoven in 1906. It consisted of a silver-plated quartz string situated in a fixed magnetic field. Voltage variations from the body passed through the string, and the interaction of the electric fields between the magnet and the string resulted in the string’s movement, which was photographed. The modern ECG machine is similar to these early models, but microelectronics and computer interfaces have been incorporated, making them more useful and powerful. Although more convenient to use, these newer machines are no more accu- rate than the original ECG built by Einthoven.

Since the development of a practical method of recording the ECG, much has been learned about the electrophysiology of the heart. In the major contribution, Nobel Prize winner Einthoven described the vector concept and stated that the action current of the heart, often called the “accession” or “regression” wave, can be represented by a vector that has magnitude, direction, and sense. The magnitude of the voltage of the accession wave is the length of the arrow shaft, the direction is determined with respect to a line of reference, and the sense is indicated by the presence of an arrowhead on the shaft. In its simplest concept, the vector represents the magnitude of a single dipole (i.e., a paired electric charge, minus and plus). Likewise, the electrical effect of a group of dipoles can be represented by a vector.

The electrocardiogram is a record of voltage variations plotted against time. The paper on which the ECG is recorded is ruled in 1-mm-spaced lines, horizontally and vertically. When the tracing is properly standardized (1-mV change produces 10-mm stylus deflection), each vertical space represents a voltage change of 0.1 mV, and each horizontal space an interval of 40 milliseconds (“m-sec” in Plate 2-15). Each fifth line, horizontal and vertical, is heavy. The time between the heavy lines is 0.2 second. The voltage change between two heavy lines is 0.5 millivolt (mV).

The cardiac rate may be determined by counting the number of R-R intervals within 16 heavy vertical time lines (15 time spaces) and multiplying by 20. The first interval counted is coincident with the zero time line (see Plate 2-15).

The conventional electrical connections used for recording the ECG are the limb leads, augmented limb leads, and precordial leads.

The unipolar augmented limbs leads register the electrical variations in potential at one point (right arm, left arm, or left leg) with respect to a point that does not vary significantly in electrical activity during cardiac contraction (see Plate 2-16). The lead is augmented by virtue of the type of electrical connection, which results in a trace of increased amplitude, versus the older Wilson unipolar lead connections. Lead aVR inscribes the electrical potentials of the right arm with respect to a null point, which is made by uniting the wires from the left arm and left leg. Lead aVL records the potentials at the left arm in relation to a connection made by the union of wires from the right arm and left foot. Lead aVF reveals the potentials at the left foot in reference to a junction made by the union of wires from the left and right arms.

At times, other precordial lead placements are helpful, including those elevated 2 inches (5 cm) above the usual positions (EV1, EV2, etc.), which may help to detect MIs. Precordial leads are also placed 2 inches below the usual positions (LV1, LV2, etc.) when the heart is unusually low in the thorax, as in patients with pulmonary emphysema. Leads to the right of V1 (V3R, V4R, etc.) are used to differentiate right bundle branch block and right ventricular hypertrophy from the normal condition. Leads farther to the left (V7, V8, etc.) are used to explore the left ventricle when it is directed posteriorly. 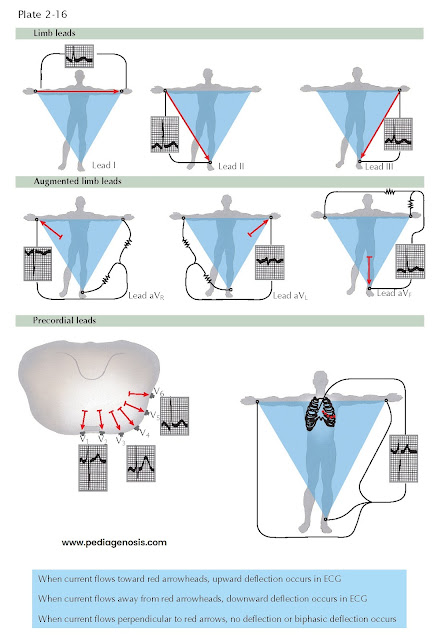 For the various leads, the reference lines of Einthoven are shown in Plate 2-16 as red arrows. For example, the line of reference for lead I connects the left and right arm electrodes. An accession wave (vector) directed toward the arrowhead of any of the red arrows results in an upward (positive) deflection in the ECG. If the electrical activity, or accession wave, is directed toward the tail of the reference arrow, a downward (negative) deflection is written, but if this wave is perpendicular to the line (90 degrees), no deflection (or a small biphasic one) will be written. The height of the ECG wave is proportional to the magnitude of the projection of the accession wave vector on a reference line.