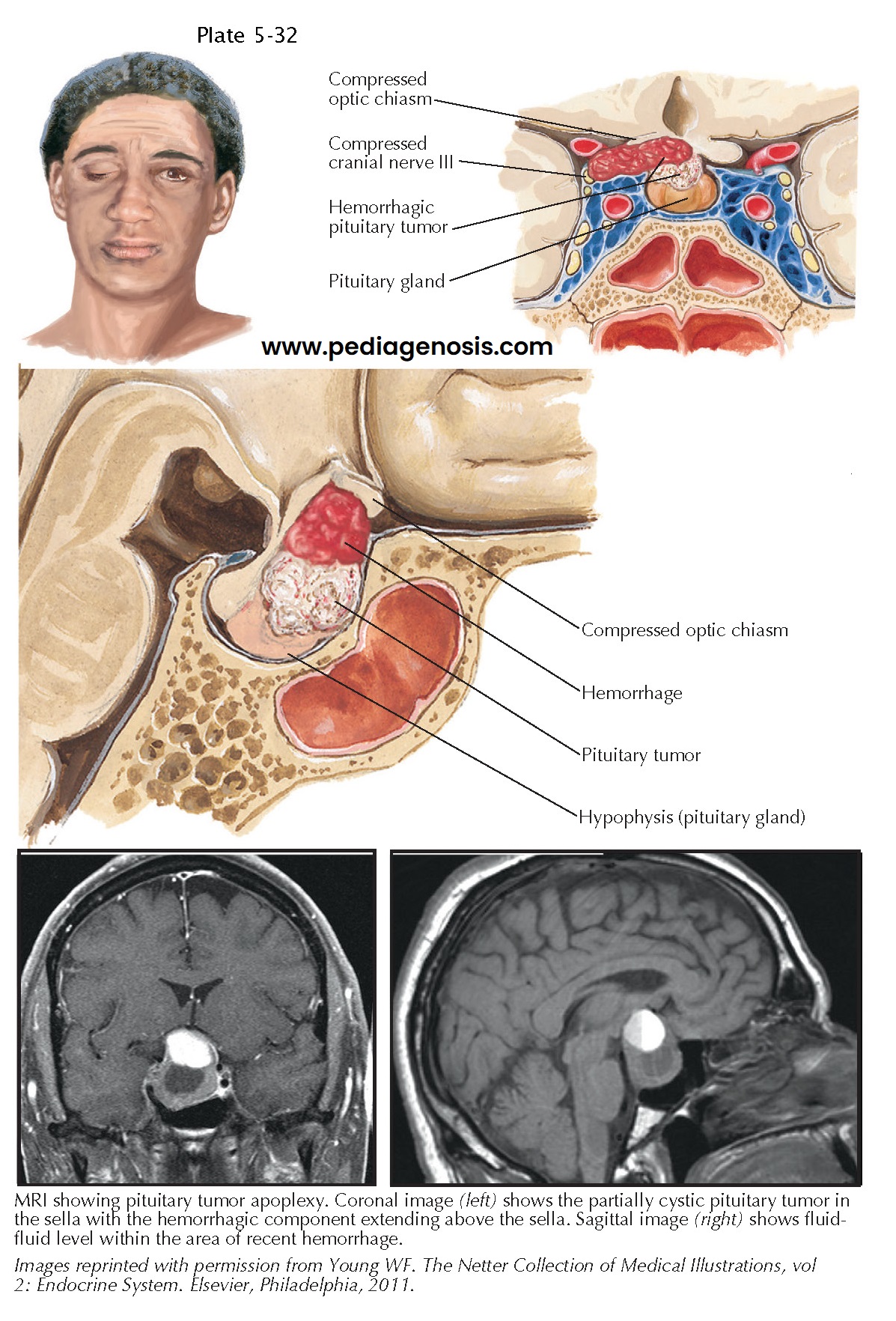 Patients with pituitary apoplexy present with severe headache of acute onset, which is typically considered as the worst headache ever experienced. Nausea and vomiting are very common. The rapid expansion of intrasellar contents frequently leads to compression of the optic chiasm, causing visual field defects. Lateral expansion resulting in compression of the nerves coursing through the cavernous sinuses (including the third, fourth, fifth, and sixth cranial nerves), fre- quently leads to diplopia, ptosis, facial pain, or numbness. Increased intracranial pressure may occur, leading to impairment in the level of consciousness. Interference with hypothalamic function may lead to manifestations of sympathetic nervous system dysfunction, including arrhythmias or disordered breathing.

In addition, some of the blood may enter the subarachnoid space, leading to meningeal irritation. Fever and neck stiffness may thus occur. Analysis of the cerebrospinal fluid may reveal the presence of red cells and increased protein content. It is therefore apparent that pituitary apoplexy should be considered in the differential diagnosis of patients with suspected subarachnoid hemorrhage or meningitis.

Life-threatening pituitary failure may occur as a result of central hypoadrenalism (adrenal crisis). Anterior hypopituitarism has been reported in up to 90% of patients with pituitary apoplexy. In contrast, central diabetes insipidus is uncommon.

Pituitary apoplexy is often spontaneous and often occurs at presentation of a pituitary adenoma. Identified risk factors for the development of pituitary apoplexy include trauma, anticoagulant use (including heparin or warfarin), coagulation disorders, and administration of dopamine agonists (including bromocriptine or cabergoline) or hypothalamic-releasing hormones.

Magnetic resonance imaging typically reveals a focus of hyperintensity (on noncontrast T1-weighted images) within a sellar mass. A fluid-fluid level may also be evident. Impingement on the optic chiasm or the cavernous sinuses is frequently present. Laboratory testing usually reveals evidence of hypopituitarism.

Pituitary apoplexy is a medical and neurosurgical emergency. These patients should be hospitalized and receive at minimum a stress dose glucocorticoid coverage to prevent the development of adrenal crisis. Of note, pharmacologic doses of glucocorticoids are often administered to minimize acute pressure effects from the hemorrhagic sellar mass on neighboring structures. Patients with impaired level of consciousness or other evidence of increased intracranial pressure, visual field defects, diplopia, or ptosis should be considered for early (within 1 week) neurosurgical decompression, generally performed via the trans-sphenoidal route. Early pituitary surgery is associated with more complete recovery of visual field deficits than observation.

In contrast, patients who maintain a normal level of consciousness and show no evidence of increased intracranial pressure, visual field defects, or ophthalmoplegia may be observed. These patients may be considered for pituitary surgery if the sellar mass fails to regress considerably after the hemorrhage is reabsorbed. Pituitary function needs to be monitored and hormone replacement therapies advised as required. Hypopituitarism is often per anent, regardless of whether surgery is performed.