Extensive space-occupying lesions within the sella or hypothalamus may lead to complete loss of anterior pituitary function. Of note, the term panhypopituitarism is indicative of complete loss of both anterior and posterior lobe function. 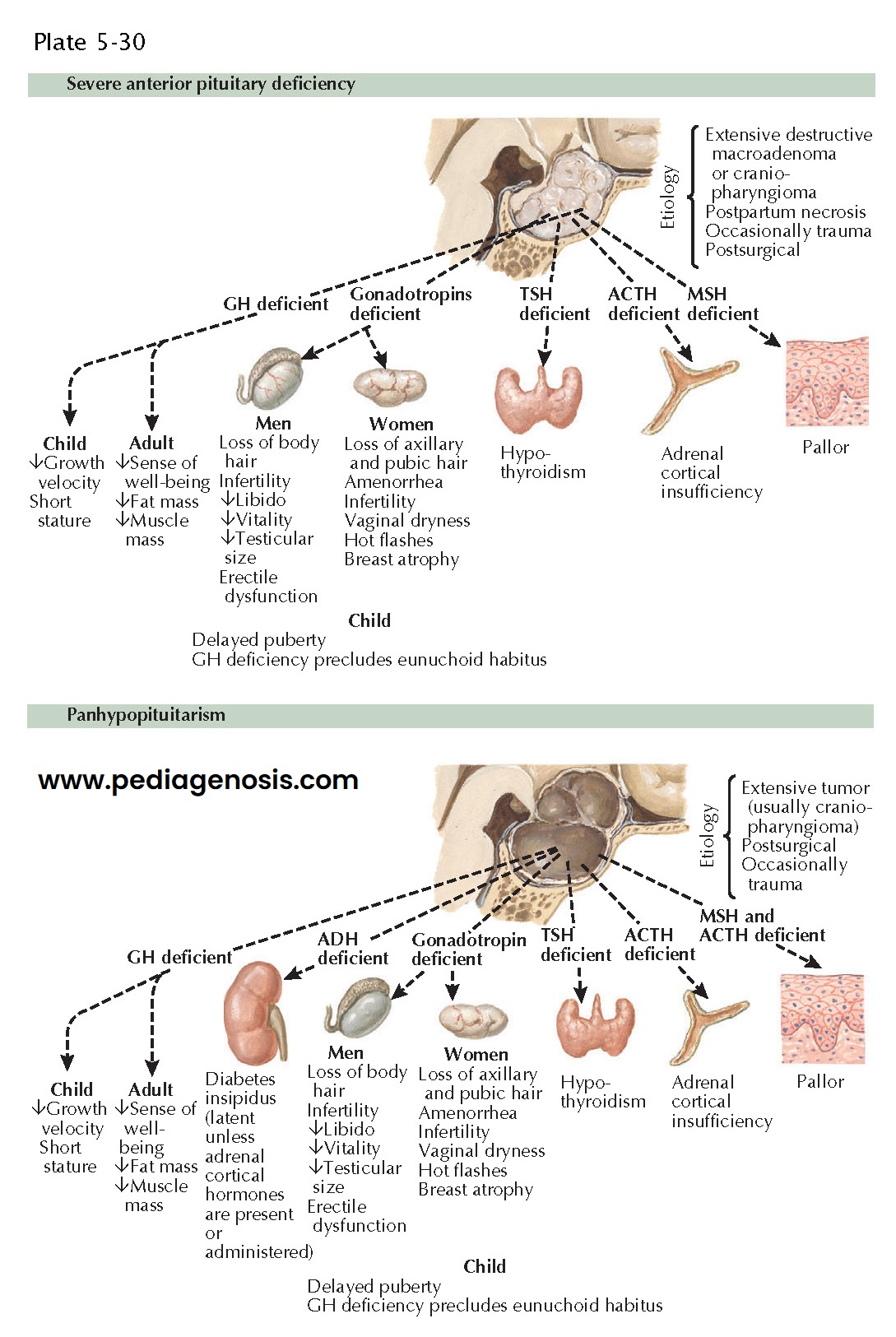 Pituitary macroadenomas, which, by definition, exceed 10 mm in greatest diameter, may cause multiple anterior pituitary hormone deficiencies but only rarely cause diabetes insipidus preoperatively. In contrast, large suprasellar tumors that impinge on the hypothalamus, stalk, and pituitary, including craniopharyngiomas, may disrupt both anterior and posterior lobe function. Similarly, pituitary surgery or trauma may lead to panhypopituitarism.

Thyrotropin deficiency leads to central hypothyroidism. The thyroid gland becomes atrophic, including thinning of the follicular epithelium. Corticotropin deficiency leads to central hypoadrenalism, involving loss of cortisol and adrenal androgen secretion. Portions of the adrenal cortex, including the zona fasciculata and the zona reticularis, become atrophic in these patients. In contrast, the zona glomerulosa remains structurally intact, and aldosterone secretion is unaffected. These patients may often exhibit pallor, occurring as a result of anemia and decreased skin pigmentation resulting from lack of corticotropin action on skin melanocytes. Growth hormone deficiency leads to a decrease in growth velocity in children or adolescents, resulting in short stature if untreated. Hypoglycemia may occur in childhood and appears to be a consequence of growth hormone and glucocorticoid deficiency. Growth hormone–deficient adults may exhibit low exercise capacity, abnormal body composition (decrease in lean body mass and bone mass and increase in fat mass), dyslipidemia, insulin resistance, increased cardiovascular risk, and impaired quality of life. Prolactin deficiency leads to failure of lactation in women and has no discernible effects in men.

Once clinically suspected, the presence of pituitary hormone deficiencies can be established through hormone testing. Assays for systemic levels of target gland hormones (morning cortisol, free thyroxine, and testosterone) are most helpful in the diagnosis of hypopituitarism. In the case of some hormones, including growth hormone and cortisol, stimulation testing is used to evaluate secretory reserve. Water deprivation testing is used to diagnose central diabetes insipidus.

Replacement therapies are available for all pituitary hormone deficiencies except prolactin and oxytocin. The respective target gland hormone is administered in patients with central hypoadrenalism (hydrocortisone or prednisone) and central hypothyroidism (levothyroxine). Sex steroid replacement (testosterone in men and estrogen-progestin in women) is generally advised, if not contraindicated. If fertility is of immediate interest, gonadotropin therapy is recommended in patients of both genders. Growth hormone replacement is advised in children, if not contraindicated. Although not essential for life, growth hormone replacement in adults is available in the United States and several other countries and may improve exercise capacity, body composition, several cardiovascular risk factors, and overall quality of life. Desmopressin, an analog of antidiuretic hormone that is devoid of vasopressor activity, is recom ended in patients with central diabetes insipidus.