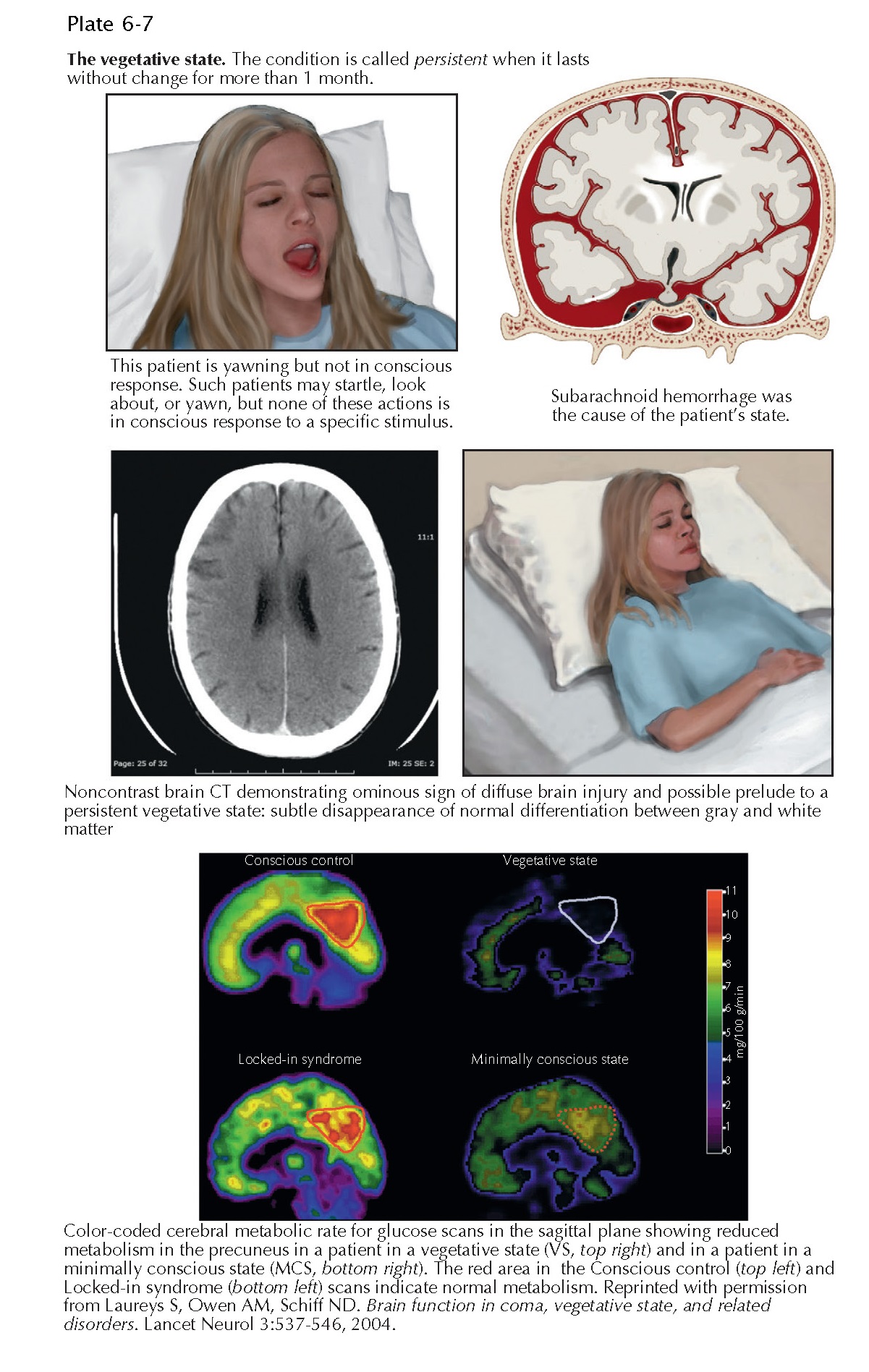 Survivors of some severe circulatory event, who are initially comatose, may pass through a spectrum of clinical conditions before partially or fully recovering consciousness. If, after having been in a coma, the patient opens the eyes but remains unable to initiate voluntary motor activity, this behavior marks the transition to what is called the vegetative state (VS). The further transition to minimally conscious state (MCS) is characterized by reproducible evidence of simple voluntary behavior. Emergence from MCS is signaled by the return of functional communication or object use. Further developments lead to outcomes ranging from severe disability to a good recovery. If, however, the patient remains in the VS for more than 1 month after the occurrence of brain damage, this condition is called the persistent vegetative state (PVS). This state is not necessarily irreversible. Reversibility is much less likely in patients in the permanent vegetative state, that is, in VS lasting more than 3 months after hypoxic-ischemic damage or 1 year after traumatic brain injury.

To date, VS and the MCS have both been defined by clinically observed behavioral responses. For example, VS is characterized by wakefulness in the absence of any awareness of self or environment. Typically, such a person retains autonomic functions with variable preservation of cranial and spinal reflexes but exhibits no clinical evidence of sustained, reproducible, purposeful, or voluntary behavioral responses to multisensory stim- ulation, nor evidence of language comprehension or response to command. MCS describes a spectrum of behavior that, at its most basic description, requires evidence of visual pursuit and, at best, involves intermittent responses to command. However, it has now become apparent using newer technologies, such as functional magnetic resonance imaging, that the distinction between VS and MCS cannot be based purely on observation. A notable proportion of patients considered to be in VS retain some awareness that is not consistent with their externally observable behavior.

The neuropathology of postanoxic VS and MCS is indistinguishable. There is characteristically little or no damage in the brainstem, but such patients commonly have evidence of diffuse necrosis in the cerebral cortex, variable abnormalities in the basal ganglia, and cerebellum, and severe thalamic damage. At a functional level, cerebral metabolic studies and magnetic resonance imaging have identified that the behavior during VS and MCS represents a functional disconnection syndrome in a large-scale frontoparietal network as a result of damage to long-range connectivity. The structures involved include the lateral and medial frontal regions, parietotemporal and posterior parie al areas, and posterior cingulate and precuneal cortex.