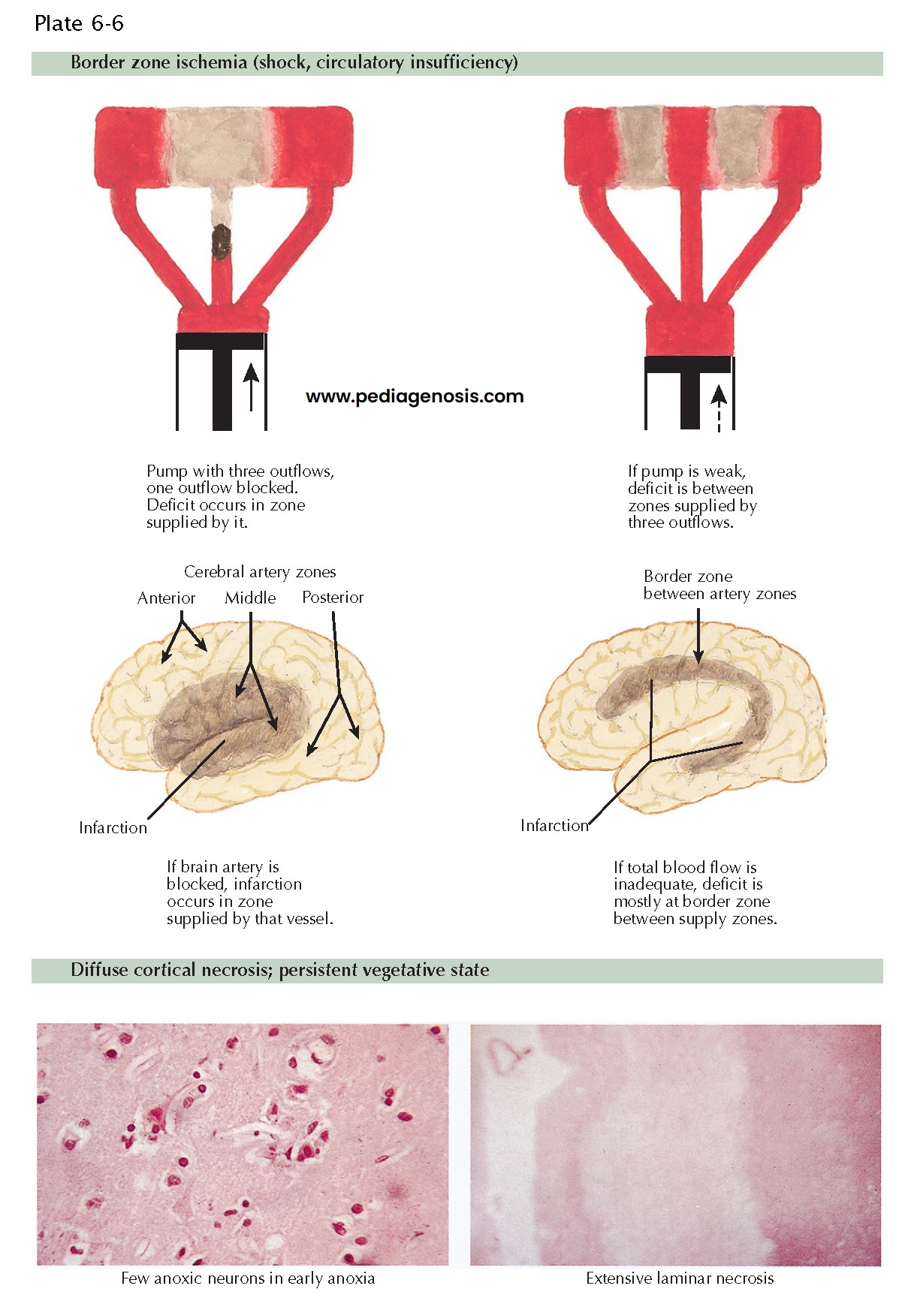 At a national level, out-of-hospital cardiac arrests are an all-too-frequent occurrence. One quarter of individuals experiencing such an arrest will receive emergency cardiopulmonary resuscitation. However, fewer than 20% of these events will lead to survival at hospital discharge even with the combined efforts of emergency and hospital critical care services. Of those who do survive, many will have profound neurologic injury and disability.

Hypoxic-Ischemic Encephalopathy. Hypoxic-ischemic encephalopathy is the term used to describe such injury after cardiac arrest or severe hypoxia causing global injury, or prolonged hypotension causing arterial border zone injury. Many variables determine the extent and location of injury: the completeness of circulatory collapse (full cardiac arrest or hypotension, with some preserved cardiac output), the duration of circulatory compromise accompanying circulatory failure, and the blood glucose level at the time of the event. Apnea or hypoxia (as in carbon monoxide poisoning or strangulation) with preserved circulatory function often results in pallidal and thalamic necrosis with preservation of cerebral cortex. Persistent hypotension leads to arterial border zone ischemic lesions at the limits of the anterior and middle cerebral artery territories and the middle and posterior cerebral artery territories.

Cardiac arrest can cause hippocampal damage, basal ganglia injury, middle laminar necrosis of the cerebral cortex, and lesions of the cerebellum and brainstem nuclei. The order in these regions of the brain also represents the hierarchy of injury. The most vulnerable region to brief cerebral ischemia is the hippocampus, and the phrase often used to describe this phenomenon is hippocampal regional vulnerability. Arterial border zone ischemia results in arm weakness, incoordination during visually directed behavior, and defective visual and spatial perception. In children, severe hypotension can lead to more extensive injury, with severe impairment of motor development and function. Loss of Purkinje cells in the cerebellum leads to ataxia and action myoclonus.

Hypothermia Treatment. Many drug and anesthetic treatments have been tested in the setting of cardiac arrest. The idea has been to use agents that reduce brain metabolism or limit the cascade of cellular events that lead to neuronal death. Currently, no single drug therapy has been found to provide significant clinical benefit. The only treatment that has been shown to improve the probability of a good outcome in adults after ventricular fibrillation or pulseless ventricular tachycardia cardiac arrest, or in babies with birth asphyxia, is physical treatment with the induction of moderate hypothermia to achieve a core body temperature of 32° C to 34° C. In infants, isolated cooling of the head after bir h asphyxia also achieves a desired therapeutic effect.