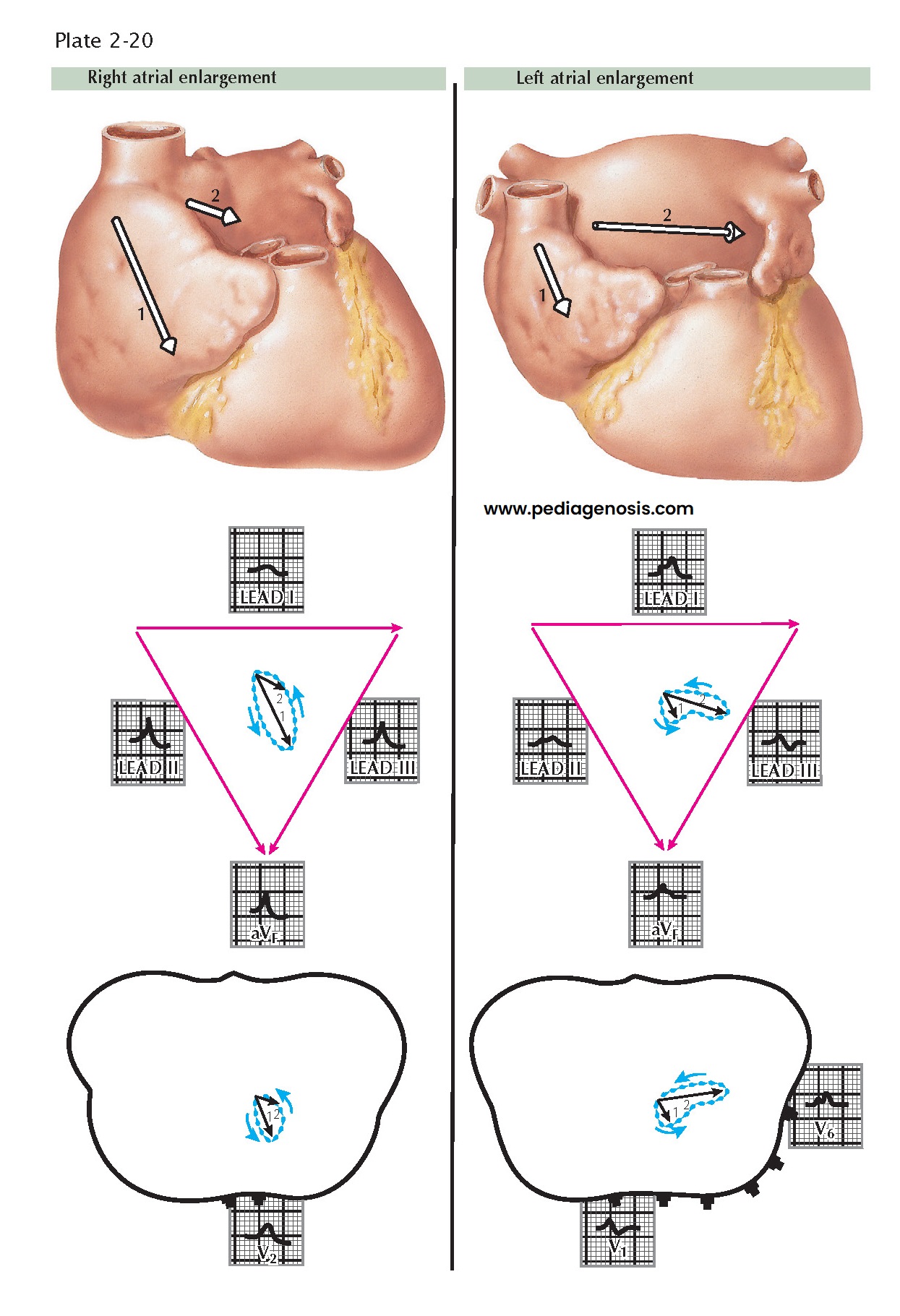 Enlargement of the right atrium, as compared to the left, occurs in patients with cor pulmonale, pulmonary hypertension, and tricuspid or pulmonary stenosis. As a result, the first atrial electric movement predominates, and the electric axis of the P wave generally is toward the foot and to the front. As a consequence, the P waves are small in lead I but are tall in leads II, III, and aVF, often exceeding the upper limit of normal (2.5 mm) for lead II. The vector loop is down, forward, and large. Moderately tall P waves are present in leads V1 and V2.

Right atrial enlargement is found when there is a pressure or flow overload in the right atrium, as compared to the left (see Plate 2-20). The pressure is increased characteristically in the right atrium in patients with tricuspid stenosis, and the “P pulmonale” picture of right atrial enlargement occurs. Here, the P waves are tall, peaked, narrow, and unnotched (easily seen in leads II, III, and aVF), with a tendency toward right axis deviation.

In contrast to the right atrium, left atrial enlargement causes the ECG picture of “P mitrale.” This usually is caused by mitral stenosis or regurgitation incident to rheumatic heart disease. The P waves are notched and wide in lead II, with a tendency to left axis deviation, but typically are normal in height. There is enlargement of the left atrium, as compared with the right; therefore the electric forces are directed toward the left axilla. Characteristically, the P waves in lead II are wide (≥0.12 second). The loop of the P wave is unusually large and shows a left axis deviation. Wide, notched P waves also are seen in lead V6. With left atrial enlargement, the late P vectors are large compared to the early vectors (see Plate 2-20).

ENLARGEMENT OF BOTH ATRIA

When both right and left atria are enlarged, the P waves are tall—more than 2.5 mm in lead II—and wide (≥0.12 second). Notching is present. This condition occurs when mitral valve disease prevails in the presence of an interatrial septal defect or when multiple valvular defects are present. The atrial T waves or the repolarization waves of the atria are normally small, often being undetectable or lost in the QRS complexes. Normally, the T wave is discordant with the P wave, in that a positive P wave is usually followed by a very small, negative T wave. Generally, the area under the atrial T wave is slightly smaller than the area under the P wave. With enlargement of the P waves, in either “P mitrale” or “P pulmonale,” the atrial T waves enlarge in proportion to the increased size of the P waves, with resultant depression of the P-R segments. Large atrial T waves often call attention to atrial abnormalities and are helpful diagnostically.