pediagenosis    October 19, 2020    AnatomyPhysiology , PelvisPerineum
Female Internal Reproductive Organs Anatomy and Physiology
The female internal organs of reproduction include the uterus and vagina and the paired ovaries and uterine (fallopian) tubes. The uterus and ovaries are particularly affected by atrophy (shrinkage) after the menopause.


Uterus Anatomy and Physiology
The uterus is a pear-shaped organ approximately 8 cm in length. Its major component is the body (or corpus), which remains somewhat enlarged after pregnancy. Inferiorly, the uterus tapers into the cylindrical neck or cervix, which protrudes into the upper part of the vagina (Fig. 5.9).
The uterus is most commonly positioned with its body lying on the superior surface of the bladder (Fig. 5.8). As the bladder fills and empties, the uterine body moves on the relatively immobile cervix. Thus, when the bladder is empty the uterine body is ante- flexed (bent forwards on the cervix), but when the bladder is distended the uterus may become retroflexed. 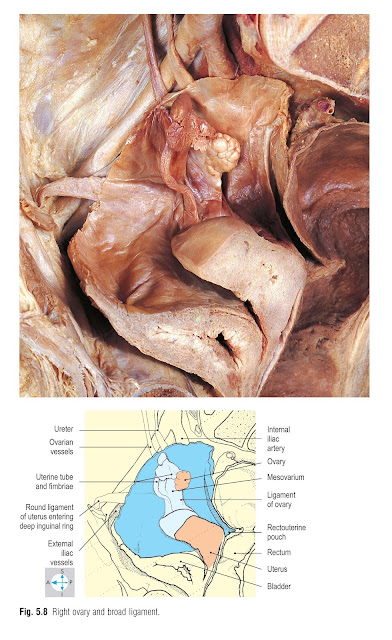 Body
The uterine body possesses anteroinferior and posterosuperior surfaces. The right and left borders give attachment to the broad ligaments and superiorly give origin to the uterine tubes (Figs 5.8 & 5.11). The rounded upper end of the organ between the attachments of the tubes is called the fundus. 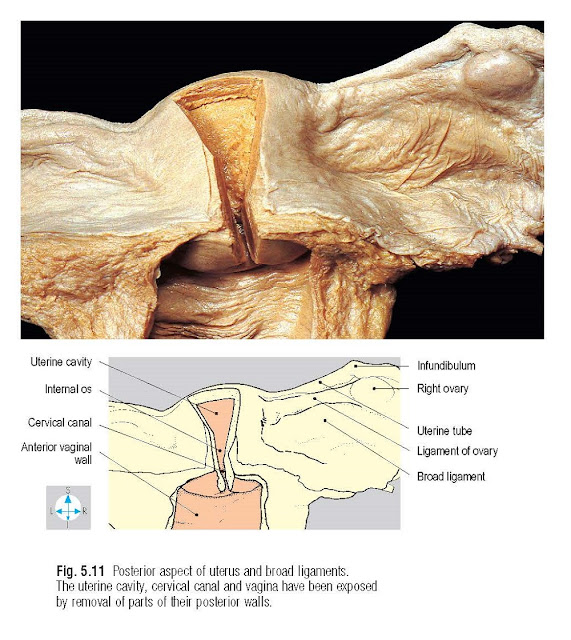 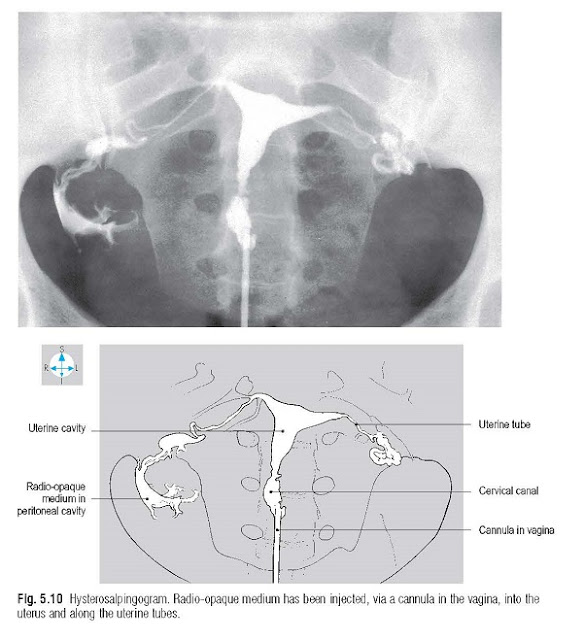 Cervix Anatomy and Physiology
The uterine cervix is thick-walled and has a narrow lumen, the cervical canal (Figs 5.9 & 5.11). The canal communicates superiorly with the uterine cavity via the internal os and opens inferiorly into the vagina at the external os. The external os is circular before the first vaginal delivery but there- after presents an oval aperture. Although approximately in line with the body of the uterus, the cervix lies roughly at right angles to the long axis of the vagina (a position called anteversion). Structures close to the cervix are vulnerable to the local spread of cervical carcinoma. Approximately half of the cervix lies above the vagina (the supravaginal part) and is covered posteriorly by peritoneum passing from the uterine body onto the vault of the vagina. The root of the broad ligament is attached to this part of the cervix and contains the uterine artery (Fig. 5.13). The vessel runs medially above the ureter then turns upwards at the side of the cervix near the lateral fornix of the vagina. Anteriorly, the supravaginal part of the cervix is related to the posterior surface of the bladder. The lower half of the cervix protrudes through the anterior wall of the vagina, making it available for clinical examination including cervical smear testing. Structures close to the cervix, including both ureters, are vulnerable to the local spread of cervical carcinoma.
The uterine body and cervix are supplied by branches of the uterine artery, a branch of the internal iliac artery. Venous blood passes into the uterine venous plexus, which drains into the internal iliac vein (Fig. 5.13).

Uterine Tubes Anatomy and Physiology
The paired uterine tubes, each approximately 10 cm long, run in the free upper borders of the broad ligaments (Figs 5.8, 5.10 & 5.11) and convey ova from the ovaries to the uterine cavity. Near the ovary, the lumen of each tube communicates with the peritoneal cavity via its pelvic aperture. This opening leads into the funnel-shaped infundibulum, which bears a series of finger-like processes, the fimbriae, one of which attaches to the ovary. The infundibulum leads into the ampulla, which forms the comparatively wide lateral part of the uterine tube. The medial part of the tube, the isthmus, is narrower and continues through the uterine wall as the intramural part of the tube.
The blood supply to the medial part of the uterine tube is provided by terminal branches of the uterine artery. This vessel runs laterally in the upper part of the broad ligament and anastomoses with the ovarian artery, which supplies the lateral portion of the tube. Venous blood drains into veins that accompany the arteries.
Fertilization of ova normally occurs in the uterine tube, usually within its ampulla.
Damage to the tubes, often as a result of inflammation (salpingitis), is a common cause of infertility. Sometimes an ectopic pregnancy occurs: a developing blastocyst may fail to reach the uterine cavity but implants and grows within the uterine tube. Rupture of the tube then leads to internal haemorrhage. 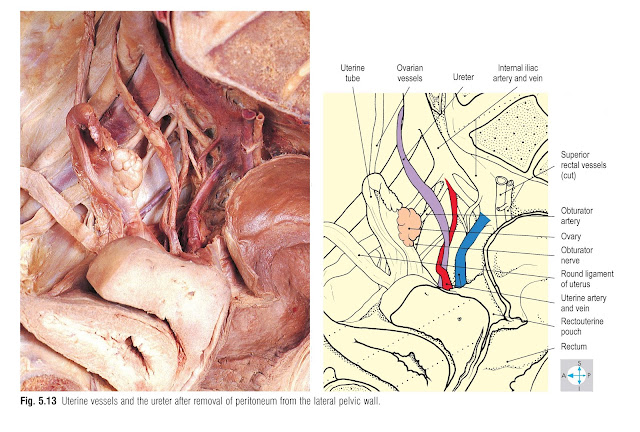 Ovaries Anatomy and Physiology
The ovaries lie close to the lateral pelvic walls, suspended from the posterior surfaces of the broad ligaments (Fig. 5.8). Each ovary is ovoid, approximately 4 cm long and 2 cm broad, with one pole directed medially towards the uterus and the other laterally towards the fimbriated end of the uterine tube. Each ovary is attached to the broad ligament by a sleeve of peritoneum, the mesovarium, which conveys the ovarian vessels. However, most of the ovarian surface is devoid of peritoneum. The ligament of the ovary attaches to the medial pole of the organ and runs within the broad ligament to reach the side of the uterine body. The ovary may lie in a shallow depression, the ovarian fossa, on the lateral pelvic wall between the external and internal iliac vessels. The ureter and the obturator nerve and vessels descend close to the ovary (Figs 5.13 & 5.16). Ovarian disease that spreads to involve the parietal peritoneum at this site, or the obturator nerve itself, may produce pain referred to the medial side of the thigh.
The ovary is supplied by the ovarian artery (Fig. 5.13), a direct branch of the abdominal aorta (p. 190). After crossing the pelvic brim, this vessel traverses the suspensory ligament of the ovary (infundibulopelvic ligament) to enter the broad ligament and divides into terminal branches within the mesovarium. The ovary is drained by numerous veins (the pampiniform plexus), which unite to form the ovarian vein. On the right, the ovarian vein terminates in the inferior vena cava, while the left ovarian vein usually joins the left renal vein (p. 194).

Vagina Anatomy and Physiology
The vagina is a midline tubular organ approximately 8–10 cm long, which slopes downwards and forwards (Figs 5.8 & 5.9). Its upper two-thirds, including the blind-ending vault, lie in the pelvic cavity. The vagina pierces the pelvic floor and terminates inferiorly by opening into the vestibule between the labia minora (p. 246). The anterior and posterior vaginal walls lie in mutual contact so that the lumen forms a transverse cleft. The lining possesses numerous transverse ridges (rugae; Fig. 5.12). 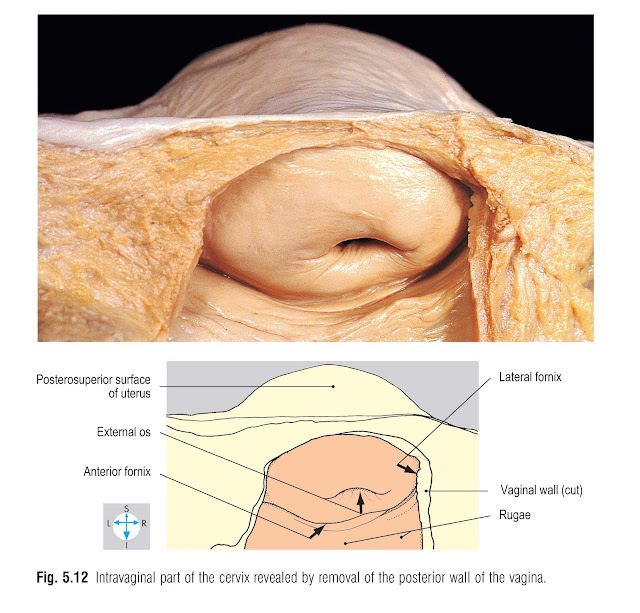 The uterine cervix pierces the upper part of the anterior vaginal wall and an anular groove surrounds the intravaginal part of the cervix. This groove is deepest superiorly where it is termed the posterior fornix (Fig. 5.9). On either side are the lateral fornices, while below the cervix is the comparatively shallow anterior fornix (Fig. 5.12).
Anteriorly, the vagina is closely applied to the posterior wall of the bladder and urethra. Posteriorly lie the rectouterine pouch of peritoneum and the ampulla of the rectum (Fig. 5.13). Lateral to its inferior third are the medial borders of the levatorani muscles, which provide important support to the vagina and uterus. Weakness of the pelvic floor musculature may lead to prolapse (descent of the uterus into the vagina).
The blood supply to the vagina is provided by branches of the uterine arteries and occasionally by vessels arising directly from the internal iliac arteries (Fig. 5.32). Venous blood passes into an extensive venous plexus surrounding the upper vagina and eventually reaches the internal iliac veins.