Diaphragm (Viewed From Above)


The origin of the diaphragm is from the outlet of the thorax and has three parts: sternal, costal, and lumbar. 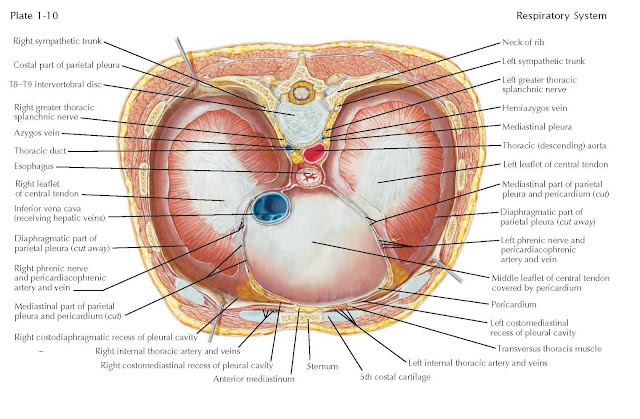 The sternal origin is by two ﬂeshy slips from the back of the xiphoid process. The costal origin is by ﬂeshy slips that interdigitate with the slips of origin of the trans- versus abdominis muscle and arise from the inner surfaces of the costal cartilages and adjacent parts of the last six ribs on each side. The lumbar portion of the origin is by a right and a left crus and right and left medial and lateral lumbocostal arches (sometimes termed arcuate ligaments). The tendinous crura blend with the anterior longitudinal ligament of the vertebral column and are attached to the anterior surfaces of the lumbar vertebral bodies and related intervertebral discs to the ﬁrst three on the right and the ﬁrst two on the left. The medial lumbocostal arch, a thickening of the fascia covering the psoas major muscle, extends from the side of the body of the ﬁrst or second lumbar vertebra to the front of the transverse process of the ﬁrst (sometimes also the second) lumbar vertebra. The lateral lumbocostal arch, passing across the quadratus lumborum muscle, extends from the transverse process of the ﬁrst lumbar vertebra to the tip and lower border of the twelfth rib.
From the extensive origin just described, the ﬁbers converge to insert in a three-leafed central tendon. Contraction of the muscular portion of the diaphragm pulls the central tendon downward, thus increasing the volume of the thoracic cavity and bringing about inspiration.
The diaphragmatic nerve supply is by way of the right and left phrenic nerves, which are branches of the right and left cervical plexuses and receive their ﬁbers primarily from the fourth cervical nerves, with some contribution from the third and ﬁfth cervical nerves.
Several structures pass between the thoracic and abdominal cavities, mainly through apertures in the diaphragm.
The aortic aperture is at the level of the twelfth thoracic vertebra situated between the diaphragm and the vertebra. It transmits the aorta, azygos vein, and thoracic duct.
The esophageal aperture is located at the level of the tenth thoracic vertebra in the ﬂeshy part of the diaphragm. It transmits the esophagus, the right and left vagus nerves, and small esophageal arteries and veins.
The inferior vena caval aperture is situated at the level of the disc between the eighth and ninth thoracic vertebrae at the junction of the right and middle leaﬂets of the central tendon. It is traversed by the inferior vena cava and some branches of the right phrenic nerve.
The right crus is pierced by the right greater and lesser splanchnic nerves, and the left crus is pierced by the left greater and lesser splanchnic nerves and the hemiazygos vein. The sympathetic trunks usually do not pierce the diaphragm but pass behind the medial lumbocostal arches.
The base of the ﬁbrous pericardial sac is partially blended with the middle leaﬂet of the central tendon of the diaphragm. The diaphragmatic portions of the parietal pleura are closely blended with the upper sur- faces of the right and left portions of the diaphragm. Where the diaphragmatic pleura reﬂects at a sharp angle to become the costal pleura, the costodiaphragmatic recess or costophrenic sulcus is formed. Where the costal pleura reﬂects to become pericardial pleura, the costomediastinal recess is formed.