Intercostal Nerves And Arteries
The typical thoracic spinal nerve is formed by the junction of a dorsal root and a ventral root near the intervertebral foramen below the vertebra having the same number as the nerve. The dorsal root is made up of a series of rootlets that emerge from one segment of the spinal cord between its dorsal and lateral white columns; it contains the nerve cell bodies of the afferent neurons that enter the spinal cord through it. This col- lection of nerve cell bodies causes a swelling of the root, named the dorsal root ganglion. A series of rootlets com- posed of axons of ventral-born gray cells leaves the same segment of the cord between the lateral and ventral white columns to form the ventral root of the spinal nerve.


The dorsal and ventral roots join near the intervertebral foramen to make up the very short common trunk of the spinal nerve, which divides almost immediately into the dorsal ramus (posterior primary division) and the ventral ramus (anterior primary division). The white and gray rami communicantes, which connect the ganglia of the sympathetic trunk and the thoracic nerves of the same level, join the ventral ramus near its origin. 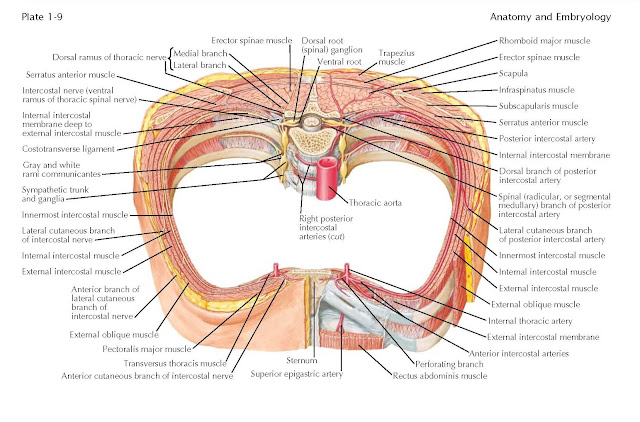