Rib Characteristics And Costovertebral Articulations
A typical rib has a head, a neck, and a body. The head articulates with one or two vertebral bodies (see below). A tubercle at the lateral end of the relatively short neck articulates with the transverse process of the lower of the two vertebrae with which the head of the rib articulates. As the body is followed anteriorly, the “angle” of the rib is formed. At the inferior border of the body is the costal or subcostal groove, partially housing the intercostal artery, vein, and nerve. Each rib is continued anteriorly by a costal cartilage by which it is attached either directly or indirectly to the sternum, except for the eleventh and twelfth ribs, which have no sternal attachment.


The ﬁrst and second ribs differ from the typical rib and therefore need special description. The ﬁrst rib— the shortest and most curved of all the ribs—is quite ﬂat, and its almost horizontal surfaces face roughly superiorly and inferiorly. On its superior surface are grooves for the subclavian artery and subclavian vein, separated by a tubercle for the attachment of the scalenus anterior muscle.

The second rib is a good deal longer than the ﬁrst, but its curvature is very similar to the curvature of the ﬁrst rib. The angle of the second rib, which is close to the tubercle, is not at all marked. Its external surface faces to some extent superiorly but a bit more outward than that of the ﬁrst rib. 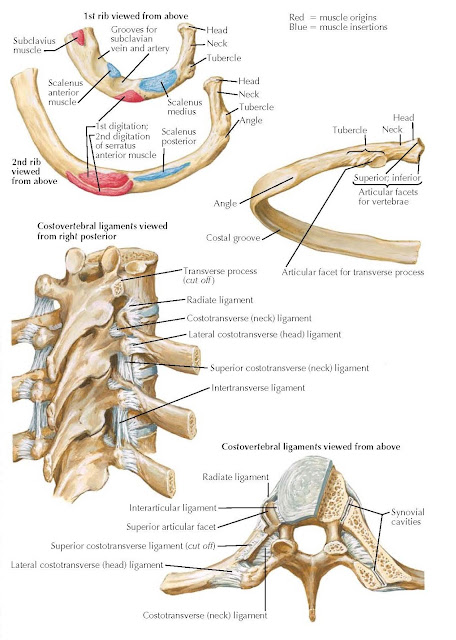