ANTERIOR THORACIC WALL
The anterior thoracic wall is covered by skin and the superﬁcial fascia, which contains the mammary glands. Its framework is formed by the anterior part of the bony thorax, described and illustrated in Plate 1-2. 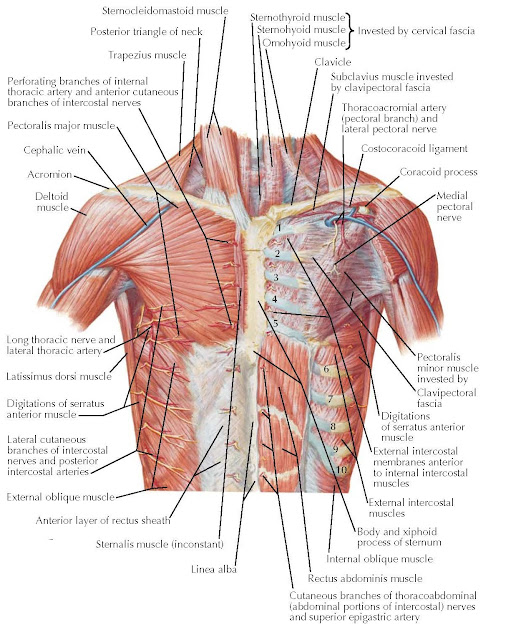 MUSCLES OF THE UPPER EXTREMITY
These muscles include the pectoralis major, pectoralis minor, serratus anterior, and subclavius.
The pectoralis major is a thick, fan-shaped muscle that has three areas of origin: clavicular, sternocostal, and abdominal. The clavicular origin is the anterior surface of roughly the medial half of the clavicle. The sternocostal origin is the anterior surface of the manubrium and body of the sternum and the costal cartilages of the ﬁrst six ribs. The small and variable abdominal origin is the aponeurosis of the external abdominal oblique muscle. The pectoralis major inserts onto the crest of the greater tubercle of the humerus.
The pectoralis minor is a thin triangular muscle that lies deep to the pectoralis major. It arises from the superior margins and external surfaces of the third, fourth, and ﬁfth ribs close to their costal cartilages and from the fascia covering the intervening intercostal muscles. The pectoralis minor inserts onto the coracoid process of the scapula. The pectoralis major and minor muscles are supplied by the medial and lateral anterior thoracic (pectoral) nerves, which are branches of the medial and lateral cords of the brachial plexus.
The serratus anterior is a large muscular sheet that curves around the thorax. It arises by muscular digitations from the external surfaces and superior borders of the ﬁrst eight or nine ribs and from the fascia covering the intervening intercostal muscles. It inserts onto the ventral surface of the vertebral border of the scapula. Its nerve supply is the long thoracic nerve, a branch of the brachial plexus (ﬁfth, sixth, and seventh cervical nerves), which courses inferiorly on the external surface of the muscle.
The subclavius is a small triangular muscle tucked between the clavicle and the ﬁrst rib. It has a tendinous origin from the junction of the ﬁrst rib and its costal cartilage, and it inserts into a groove toward the lateral end of the lower surface of the clavicle. It receives its nerve supply from the subclavian branch of the brachial plexus. 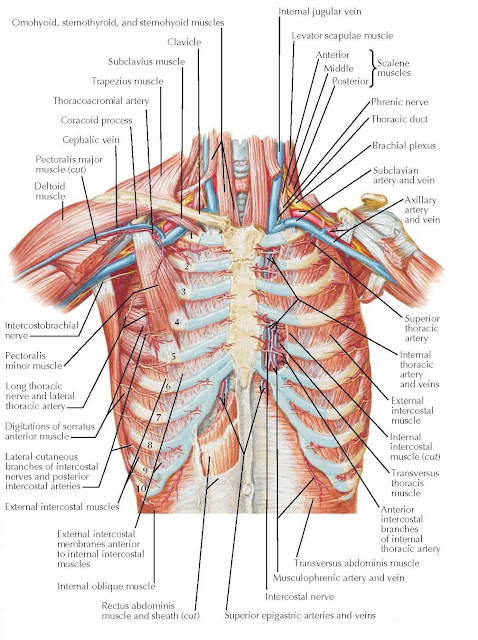 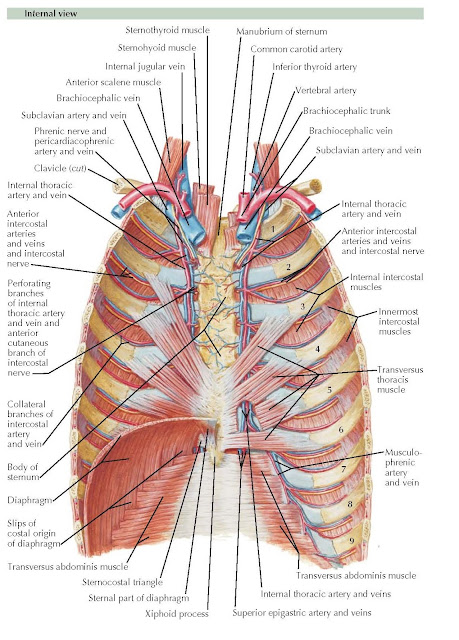 LYMPHATIC DRAINAGE OF THE ANTERIOR THORACIC WALL
The lymphatic drainage of the anterior thoracic wall involves three general groups of lymph nodes: sternal (internal thoracic), phrenic (diaphragmatic), and intercostal. The sternal nodes lie along the superior parts of the internal thoracic arteries. There are several groups of phrenic nodes on the superior surface of the diaphragm, and there is an intercostal node or two at the vertebral end of each intercostal space. The efferents of the sternal nodes usually empty into the broncho mediastinal trunk. The efferents of the phrenic nodes ordinarily go to the sternal nodes. The upper intercostal nodes send their efferents to the thoracic duct, and the lower ones on each side drain intra vessel that courses inferiorly into the cisterna chyli.