DORSAL ASPECT OF THE THORAX


DORSAL ASPECT OF THE THORAX
The dorsal aspect of the thorax is also covered by skin and superﬁcial fascia, with the cutaneous nerves to the skin of the back ramifying in the latter. These cutaneous nerves are branches of the posterior primary divisions (dorsal rami) of the thoracic nerves for the upper six thoracic levels the medial branch and for the lower six the lateral branch.


The more superﬁcial muscles on the posterior aspect of the thorax belong to the group connecting the upper extremity to the vertebral column. They are the trapezius, latissimus dorsi, rhomboideus major, rhomboideus minor, and levator scapulae. 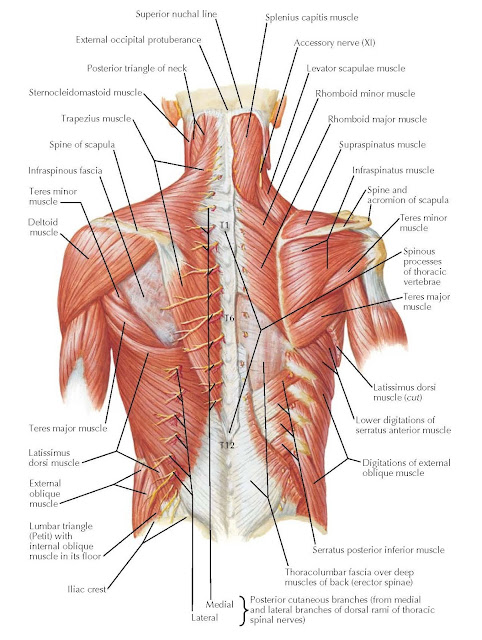 The trapezius muscle arises from about the medial third of the superior nuchal line, the external occipital protuberance and the posterior margin of the ligamentum nuchae, and the spinous processes of the seventh cervical and all of the thoracic vertebrae and the related supraspinous ligaments. The lower ﬁbers converge into an aponeurosis that slides over the triangular area at the medial end of the spine of the scapula and is attached at the apex of this triangle. The middle group of ﬁbers is inserted on the medial margin of the acromion and the upper margin of the posterior border of the spine of the scapula. The upper group of ﬁbers ends on the posterior border of the lateral third of the clavicle. The trapezius is supplied by the spinal part of the eleventh cranial nerve and branches from the anterior divisions (ventral rami) of the third and fourth cervical nerves. When contracting, the muscle tends to pull the scapula medially while at the same time rotating it, thus carrying the shoulder superiorly. If the shoulder is ﬁxed, the upper ﬁbers tilt the head so that the face goes upward toward the opposite side.

The latissimus dorsi muscle has a broad origin—by a small muscular slip from the outer lip of the iliac crest just lateral to the sacrospinalis muscle and by an extensive aponeurosis attached to the spinous processes of the lower six thoracic vertebrae, the lumbar and sacral vertebrae, and the related supraspinous ligaments. This muscle is inserted into the depth of the intertubercular groove of the humerus. Its nerve supply comes from the sixth, seventh, and eighth cervical nerves by way of the thoracodorsal branch of the brachial plexus. This muscle helps with extension, adduction, and medial rotation at the shoulder joint and helps to depress the raised arm against resistance.
The rhomboideus major and minor muscles are often difﬁcult to separate. The rhomboideus major arises from the tips of the spinous processes and supraspinous ligaments of the second to ﬁfth thoracic vertebrae. Its insertion is into the vertebral border of the scapula via a tendinous arch running from the lower angle of the smooth triangle at the root of the spine to the inferior angle. The rhomboideus minor muscle arises from the spinous processes of the ﬁrst thoracic and last cervical vertebrae and the lower part of the ligamentum nuchae and is inserted into the vertebral border of the scapula at the base of the triangle, forming the root of the scapular spine. The rhomboideus muscles are supplied by ﬁbers from the ﬁfth and sixth cervical nerves by way of the dorsoscapular branch of the brachial plexus. The rhomboideus major and minor muscles tend to draw the scapula toward the vertebral column and slightly superiorly, with the lower ﬁbers of the major muscles helping to rotate the scapula so that the shoulder is depressed.

The levator scapulae muscle originates in four tendinous slips attached to the transverse processes of the ﬁrst four cervical vertebrae. Its insertion is the vertebral border of the scapula from its superior angle to the smooth triangle at the medial end of the spine scapula. Its nerve supply is primarily by cervical plexus branches from the ventral rami of the third and fourth cervical nerves. The levator scapulae, as the name indicates, elevates the scapula, drawing it medially and rotating it so that the tip of the shoulder is depressed.
Just deep to the group of muscles connecting the upper extremity to the vertebral column lie the serratus posterior superior and serratus posterior inferior muscles. 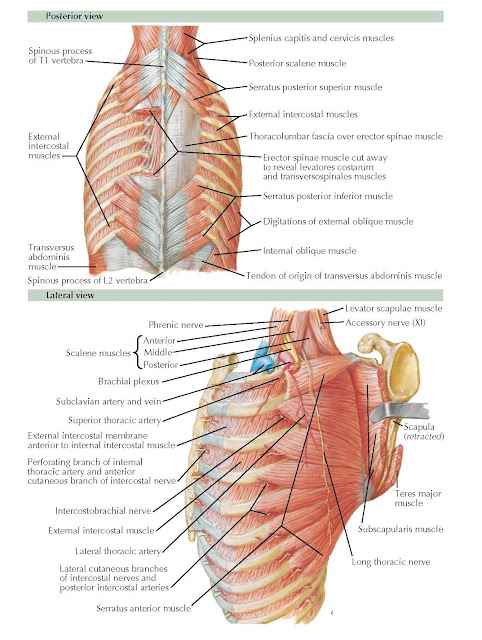 The serratus posterior superior muscle has an origin via a thin aponeurosis attached to the lower part of the ligamentum nuchae and to the spinous processes and related supraspinous ligaments of the seventh cervical and upper two or three thoracic vertebrae. It is inserted by ﬂeshy digitations into the upper borders of the second to ﬁfth ribs lateral to their angles. This muscle helps to increase the size of the thoracic cavity by elevating the ribs. The serratus posterior inferior muscle arises by means of a thin aponeurosis from the spinous processes and related supraspinous ligaments of the last two thoracic vertebrae and the ﬁrst two or three lumbar vertebrae. This muscle inserts by ﬂeshy digitations into the lower borders of the last four ribs, just beyond their angles. It tends to pull the last four ribs downward and outward. The serratus posterior muscles receive branches of the ventral rami of the thoracic nerves at the levels at which they are located.
Just deep to the serratus posterior superior muscle lie the thoracic portions of the splenius cervicis and capitis muscles.
The splenius cervicis muscle has a tendinous origin from the spinous processes of the third to sixth thoracic vertebrae and wraps around the deeper muscles to insert by tendinous fasciculi onto the transverse processes of the upper two or three cervical vertebrae. The splenius capitis muscle arises from the inferior half of the ligamentum nuchae and the spinous processes of the seventh cervical and the ﬁrst three or four thoracic vertebrae. It is inserted onto the occipital bone just inferior to the lateral third of the superior nuchal line. The splenius muscles tend to pull the head and neck backward and laterally and to turn the face toward the same side. They are supplied by branches of the posterior primary divisions of the middle and lower cervical nerves.
The groove lateral to the spinous processes of the thoracic vertebrae is ﬁlled by the sacrospinalis muscle, which is covered by the thoracic part of the lumbodorsal fascia. Deep to the sacrospinalis muscle lie the short vertebrocostal and intervertebral muscles; they are not described here.