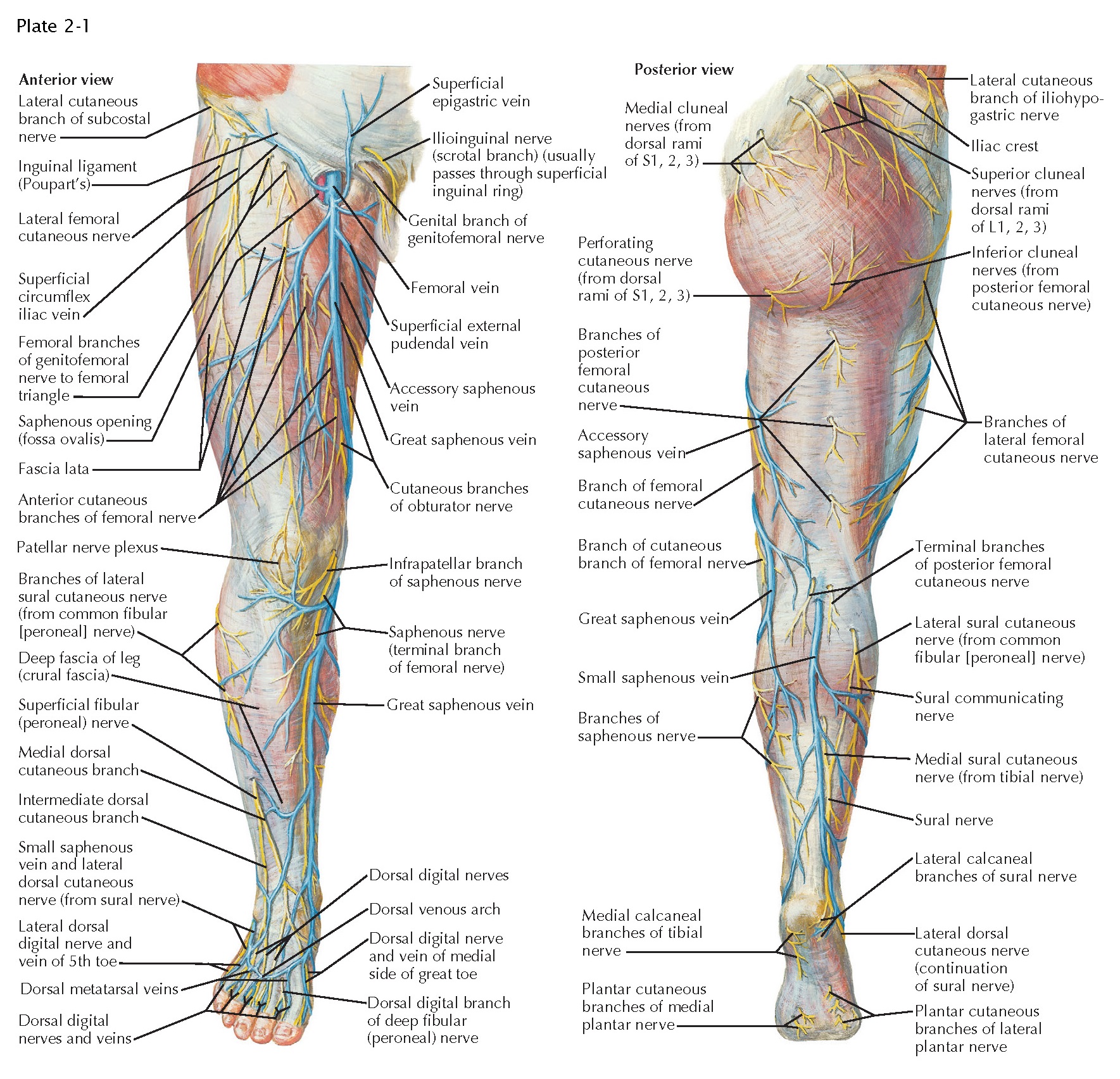 Certain prominent veins, unaccompanied by arteries, are found in the subcutaneous tissue of the lower limb (see Plate 2-1). The principal ones are the greater and lesser saphenous veins, which arise in the venous radicles in the feet and toes. Dorsal digital veins lie along the dorsal margins of each digit, uniting at the webs of the toes into short dorsal metatarsal veins that empty into the dorsal venous arch. There are also plantar digital veins, which drain into the dorsal metatarsal veins.

The greater saphenous vein continues the medial end of the dorsal venous arch and is the longest named vein of the body. It turns upward anterior to the medial malleolus at the ankle and, ascending immediately posterior to the medial margin of the tibia, passes the knee against the posterior border of the medial femoral condyle. In the thigh, the vein inclines anteriorly and lateralward; in the femoral triangle, it turns deeply through the saphenous opening to empty into the femoral vein. In the leg, the greater saphenous vein has tributaries from the heel of the foot, the front of the leg, and the calf. It also communicates with radicles of the lesser saphenous vein.

Valves in the greater saphenous vein vary from 10 to 20 in number and are more numerous in the leg than in the thigh. Perforating communications to deep veins pass through the deep fascia at all levels of the limb. Blood passes from superficial to deep through these communications, with valves in the communications determining the direction of drainage. In the leg, the greater saphenous vein is accompanied by a branch of the saphenous nerve; in the thigh, an anterior femoral cutaneous nerve lies next to it.

The lesser saphenous vein, continuing the lateral extension of the dorsal venous arch, receives lateral marginal veins in the foot and passes backward along the lateral border of the foot in company with the sural nerve. It then turns upward to ascend through the middle of the calf. The vein pierces the crural fascia, mostly in the middle third of the leg but frequently in the upper third, and ascends deep to or in a split of the deep fascia. It usually (75% of cases) terminates in the popliteal vein. The lesser saphenous vein has 6 to 12 valves. It communicates with radicles of the greater saphenous vein and also with deep veins of the leg. It frequently gives rise to a radicle, which communicates with the accessory saphenous vein. The lesser saphenous vein is accompanied by the sural nerve in the lower half of the leg; in its terminal course in the popliteal fossa, it has a close anatomic relationship to the tibial nerve. The deep nerves of the lower limb are discussed separately (see Plates 2-5 to 2-7).

The lateral femoral cutaneous nerve (L2, 3) is a direct branch of the lumbar plexus. It becomes subcutaneous about 10 cm below the anterior iliac spine and distributes to anterior and lateral aspects of the thigh. Its larger anterior distribution may reach the patellar plexus.

The posterior femoral cutaneous nerve (S1, 2, 3) from the sacral plexus descends in the posterior midline of the thigh deep to the fascia lata, giving off branches that pierce the fascia and distribute both medially and laterally. The nerve finally reaches the levels of the popliteal fossa and the upper calf. The posterior femoral cutaneous nerve, lying subgluteally alongside the sciatic nerve, gives rise to the inferior cluneal nerve. This nerve turns around the lower border of the gluteus maximus muscle and supplies the skin over the lower and lateral parts of the muscle.

A perforating cutaneous nerve (S2, 3) arises from the sacral plexus. It gets its name because it perforates the sacrotuberal ligament and the lower fibers of the gluteus maximus muscle and distributes to the skin over the medial part of the fold of the buttock.

The obturator nerve (L2, 3, 4) from the lumbar plexus is largely muscular in the thigh, but its anterior branch usually ends as a cutaneous branch. This is distributed to the skin of the distal third of the thigh on its medial surface.

The saphenous nerve (L3, 4) is the terminal branch of the femoral nerve, even though it arises in the femoral canal. It traverses the whole length of the adductor canal, at its lower end piercing the vastoadductor membrane to become superficial along with the saphenous branch of the descending genicular artery. It descends in the leg in company with the greater saphenous vein. An infrapatellar branch curves downward below the patella, forming the patellar plexus with terminals of the medial and lateral femoral cutaneous nerves. The saphenous nerve continues distally along the medial surface of the leg, distributing from there and finally reaching the posterior half of the dorsum and the medial side of the foot.

The medial sural cutaneous nerve (S1, 2) arises from the tibial nerve in the popliteal fossa. It descends as far as the middle of the leg. Here, it is joined by the peroneal communicating nerve to form the sural nerve. The level of junction of these nerves is quite variable, and in about 20% of cases, they fail to unite; the peroneal communicating branch then distributes in the leg, and the medial sural cutaneous nerve supplies the heel and foot areas.

The sural nerve (S1, 2), formed as described earlier, usually becomes superficial at the middle of the length of the leg. It descends in company with the lesser saphenous vein, turning with it under the lateral malleolus onto the side of the foot. As the lateral dorsal cutaneous nerve of the foot, it is cutaneous to the lateral side of the foot, having previously given off lateral calcaneal branches to the ankle and heel. It extends to the little toe, has articular branches to the ankle and tarsal joints, and communicates with the intermediate dorsal cutaneous branch of the superficial peroneal nerve.

The superficial peroneal nerve (L4, 5; S1), a branch of the common peroneal nerve, descends to the distal third of the leg, where it almost immediately divides into two terminal branches. The medial dorsal cutaneous nerve supplies cutaneous twigs in the distal third of the leg and then, crossing the extensor retinaculum, divides over the dorsum of the foot into two or three branches for the supply of the dorsum and sides of the medial 212 toes. The deep peroneal nerve (L4, 5) has cutaneous terminals to the web and adjacent sides of the great and second toes; and in this interval, the terminals of the medial dorsal cutaneous nerve merely communicate with the branches of the deep peroneal nerve.

The intermediate dorsal cutaneous nerve passes more laterally over the dorsum of the foot and divides into cutaneous branches to the lateral side of the ankle and the foot. It terminates in dorsal digital branches for the adjacent sides of the third and fourth and fourth and fifth toes. The more lateral branch communicates with the lateral dorsal cutaneous nerve. As in the fingers, the dorsal digital branches to the toes are smaller than the corresponding plantar digital nerves and distribute distalward only over the middle phalanges. The terminal segment of the toes is supplied by dorsal terminals of the plantar nerves.

The tibial nerve supplies the musculature of the back of the leg and continues into the foot behind the medial malleolus. Its medial calcaneal branches (S1, 2) distribute to the heel and the posterior part of the sole of the foot. Derived from the tibial nerve deep to the abductor hallucis muscle are the medial and lateral plantar nerves. The medial plantar nerve (L4, 5) provides a proper digital nerve to the medial side of the great toe and three common digital branches. Each of the latter splits into two proper digital nerves, which supply the skin of the adjacent sides of digits I and II, II and III, and III and IV, respectively. The lateral plantar nerve (S1, 2) provides a common digital nerve, which also divides into proper digital nerves; two of them reach the adjacent sides of the fourth and fifth toes, and one reaches the lateral side of the little toe. The plantar digital nerves reach the whole plantar surface of the digits and also furnish small dorsal twigs for the nail bed and tip of each toe.