The risk of thrombosis among cancer patients is substantially higher than in the general population and may be even higher in those receiving chemotherapy. Patients with cancer and venous thromboembolism are more likely to develop recurrent thromboembolic complications and major bleeding during anticoagulant therapy than those without malignancy. Low- molecular-weight heparin (LMWH) may be more effective than warfarin in patients with cancer. LMWH should be considered for the ﬁrst 3 to 6 months of therapy, and anticoagulant therapy should be continued indeﬁnitely or until cure of the cancer.

Pulmonary embolism (PE) is an important potential complication of pregnancy and is associated with substantial risk to the mother. A complete discussion of the diagnosis and management of PE in pregnancy is beyond the scope of this section. 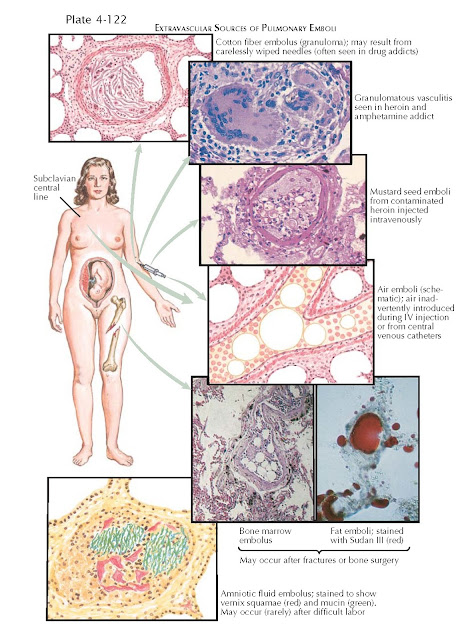 The most common cause of fat embolism is trauma to bones, particularly the long bones of the legs. Fat embolism may also be associated with air emboli in decompression sickness (caisson disease). Microscopically, the fat emboli can be demonstrated with fat stains such as Sudan III or IV or oil red O. With these stains, they appear as red-orange droplets, several microns in diameter, ﬁlling the small arteries and alveolar capillaries. With routine stains, they appear as optically clear spaces in the vascular lumina. Clinically, fat embolism is often associated with acute respiratory failure (adult respiratory distress syndrome). Cutaneous and conjunctival petechial hemorrhages and embolism of retinal vessels are found in about half the cases.

This relatively rare condition is caused by the massive leakage of amniotic ﬂuid into the uterine veins. The amniotic ﬂuid reaches the uterine venous circulation either as a result of vigorous uterine contraction after rupture of the membranes or through tears or surgical incisions in the myometrium or endocervix. Clinically, the condition is characterized by sudden dyspnea, cyanosis, systemic hypotension, and death during or immediately after delivery. The mechanism of death is not clear because the emboli consist of a suspension of epithelial squamae, lanugo, and cellular debris, usually occluding a few small blood vessels. Death has been attributed to either anaphylactoid reaction to the amniotic ﬂuid or disseminated intravascular coagulation caused by activation of the clotting mechanism by amniotic ﬂuid thromboplastin.

Air may be sucked into veins during attempts at abortion, after chest injury as a result of a motor vehicle accident, during the induction of artiﬁcial pneumothorax or pneumoperitoneum, placement of central venous catheters, and in a number of other circumstances. The effects of air embolism depend on the amount of air that reaches the circulation and the rapidity of its entry. The volume of air necessary to cause death in humans is usually more than 100 mL. In debilitated persons, a smaller volume of air may be fatal. Death is caused by blockage by an air trap in the outﬂow tract of the right ventricle, but small air bubbles can be seen in small pulmonary blood vessels.

A wide variety of organic or inorganic substances may enter the venous circulation and reach the lungs. This type of embolism has become common in certain groups addicted to narcotic drugs. The drugs are rarely chemically pure and are frequently adulterated with vegetable seeds, talc, and other substances.

As with the other kinds of emboli, the effect of foreign bodies depends to a great extent on the rapidity and extent of embolization. Such particles as ﬁbers or talc are likely to produce an inﬂammatory response in the wall of small pulmonary arteries, with formation of foreign body granulomas composed of macrophages and multinucleated giant cells. The granuloma may cause partial or total occlusion of the involved blood vessel. If several blood vessels are involved, pulmonary vascular resistance may become elevated and lead to pulmonary hypertension.