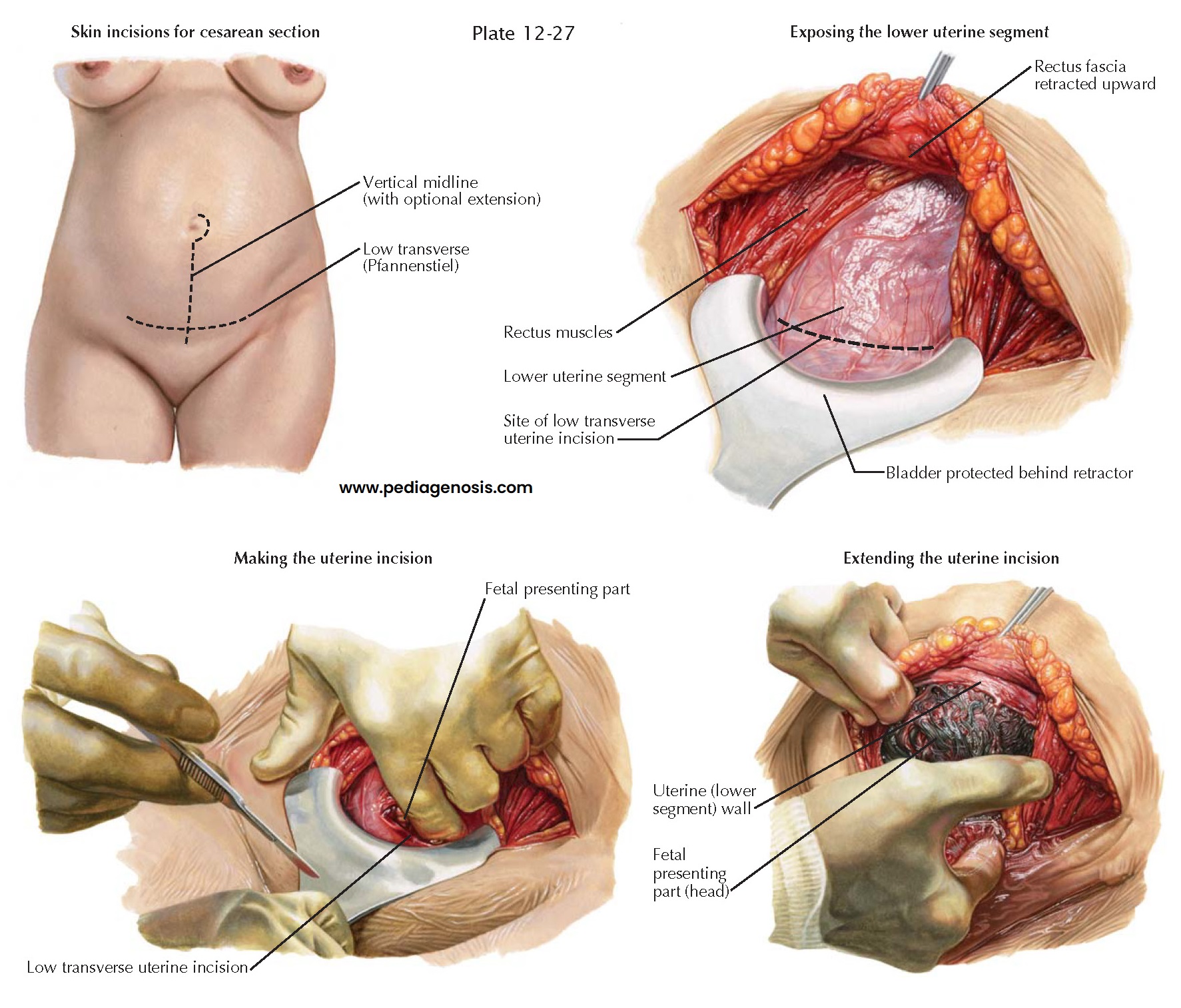 Cesarean delivery (or cesarean section) is the delivery of the fetus through surgical incisions in the mother’s abdomen and uterus. It may be chosen to accomplish fetal delivery when it is impossible, impractical, or unsafe for the baby to be delivered vaginally. The rate of cesarean birth varies from 10% to more than 50% around the world, inﬂuenced by cultural factors and the availability of surgical care. In the United States, the rate of cesarean births rose ﬁvefold for the 20-year period ending in the early 1990s and was 30% in 2006. The exact reasons for this are open to conjecture but concerns about liability, almost universal use of electronic fetal monitoring, increasing birth weight, and an increased number of repeat cesarean deliveries have all been postulated.

Because cesarean delivery is a major surgical procedure, the rate of maternal mortality is roughly three-to fourfold higher than for vaginal delivery. Potential risks of cesarean delivery include a longer maternal hospital stay, an increased risk of respiratory problems for the baby due to iatrogenic prematurity, and greater complications in subsequent pregnancies, including increased risks of uterine rupture and placental implantation problems. The risks of placenta previa, placenta accreta, and the need for cesarean hysterectomy all increase with each succeeding cesarean delivery. Some have suggested that cesarean delivery decreases the risk of subsequent pelvic ﬂoor dysfunction and urinary incontinence but analysis of stress urinary incontinence rates at 2 and 5 years after delivery has shown no difference based on the mode of delivery. At 3 months and 24 months after delivery, breastfeeding rates are also not altered by mode of delivery.

Cesarean delivery may be accomplished through either a lower abdominal vertical midline or transverse (Pfannenstiel) incision. Cesarean sections are not classiﬁed by the kind of abdominal incision made but rather as lower uterine segment (transverse or vertical) when the uterine incision is in the lower uterine segment or classic when the incision is in the upper, contractile portion of the uterus. Patients with lower uterine segment cesarean deliveries may be candidates for future vaginal delivery because these incisions are less likely to rupture in labor. Patients with classic incisions and those who have had incisions of the upper uterus for other reasons (e.g., myomectomy, repair of uterine malformations, cornual resection) are at greater risk of rupture of the uterine scar before or during labor and are generally not advised to labor in subsequent pregnancies.

Recovery following cesarean birth is similar to that for other major abdominal surgeries, with a progressive return to full function expected over the subsequent 4 to 6 weeks. 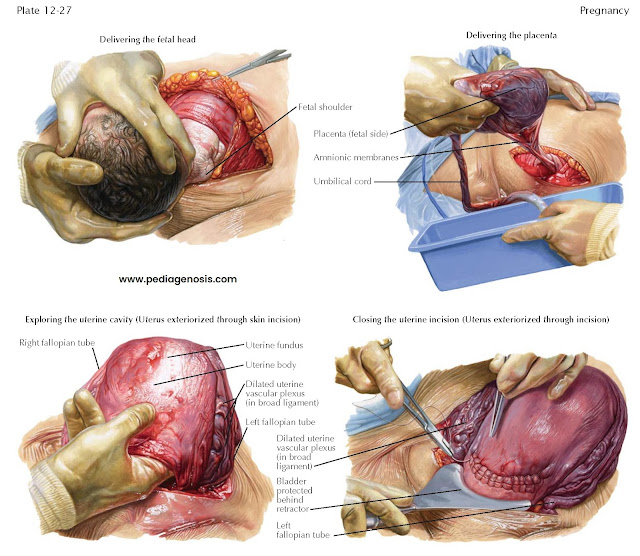 Anesthesia for cesarean birth is generally provided by a regional anesthetic. This allows for participation in the process by the mother and avoids sedation of the baby. When a general anesthetic must be used, as in emergency cases, rapid delivery of the infant may reduce the impact of anesthetic agents transferred from the mother’s circulation.

Vaginal birth after cesarean section (VBAC) may be safe and effective in reducing maternal morbidity as well as cesarean section rates if careful maternal and fetal monitoring is available as well as staff and facilities for emergency cesarean section. Although vaginal birth after cesarean delivery is appropriate for most women with a history of a low-transverse cesarean delivery, several factors increase the likelihood of a failed trial of labor, which in turn leads to increased maternal and perinatal morbidity. As the frequency of VBAC has increased, so has the number of cases of uterine rupture and other complications. As a result, many physicians and hospitals have discontinued the practice altogether, contributing to the increased rate of cesarean delivery and a decline in the VBAC rate to less than 15%.