RUPTURE OF THE UTERUS

RUPTURE OF THE UTERUS

Rupture of the uterus during pregnancy is considered a most tragic and serious obstetric accident because it may be followed by the death of both mother and fetus. It may occur during pregnancy before or after the onset of labor. Rupture may occur spontaneously, as with a previous cesarean section scar, uterine anomaly or, rarely, an intact uterus, or it may be caused by trauma, including obstetric maneuvers such as forceps rotations. 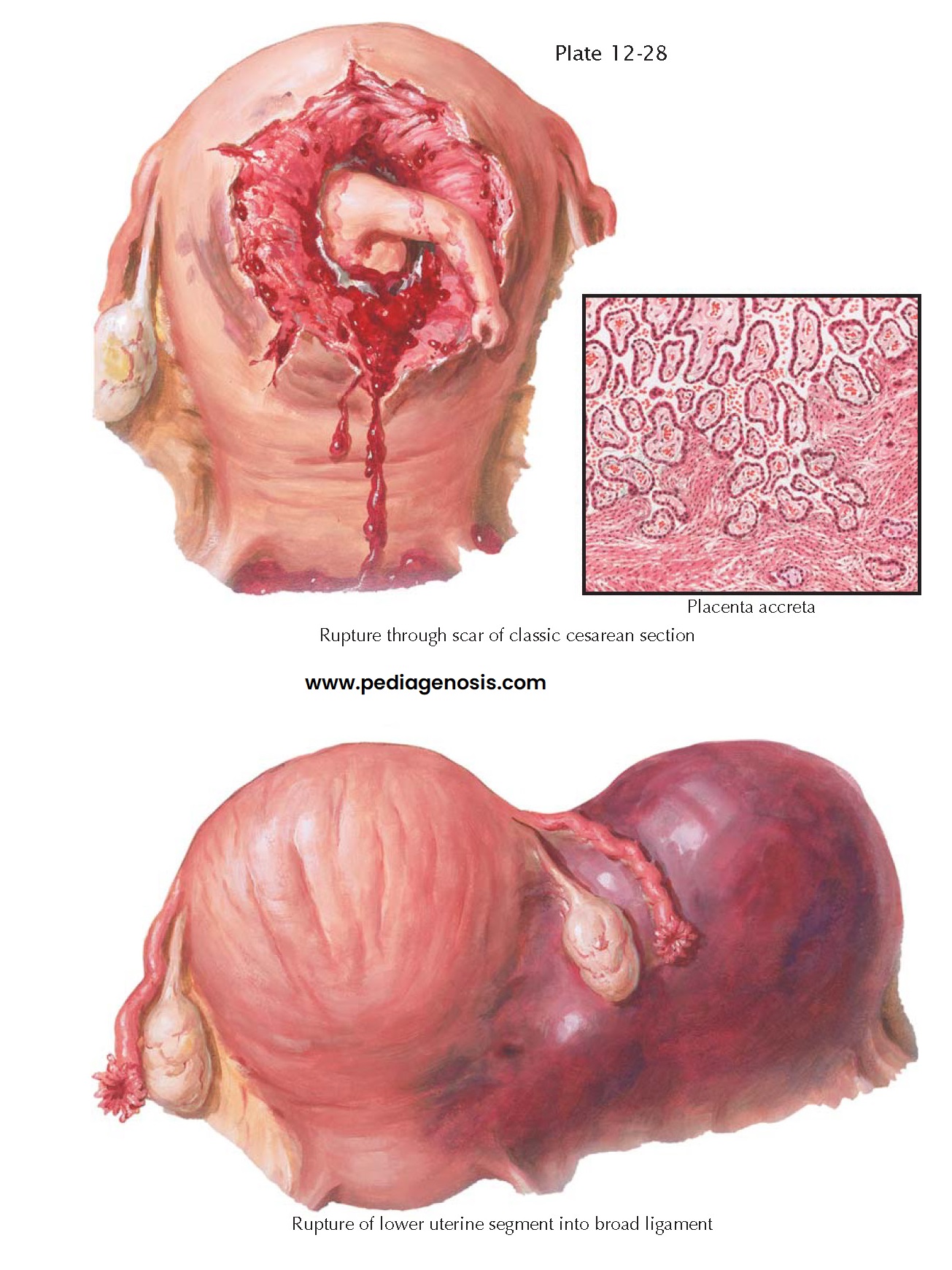 Spontaneous rupture of the intact uterus during pregnancy, without the patient’s being in labor, is an extremely rare occurrence. The cause usually lies within the uterus itself, as in the presence of adenomyosis or when the fetus is carried in a poorly developed horn of a bicornuate uterus. In these cases, the rupture occurs usually in the fundus, in contrast to the ruptures during labor that are usually in the lower segment.

Spontaneous rupture during labor is usually caused by difﬁcult (obstructed) vaginal delivery or by unrecognized cephalopelvic disproportion. Transverse presentation requiring version, hydrocephalus, impacted tumors, and brow and face presentations are the most common factors in causing dystocia and contribute largely to spontaneous rupture of the unscarred uterus during labor.

Rupture in the lower segment may extend to the fundus. The lateral sides are more frequently affected. The blood may enter the peritoneal cavity if the rupture opens the peritoneal sheath covering the uterus, or the blood may dissect between the sheets of the broad ligament, thus giving rise to retroperitoneal hematoma. In the latter case the bleeding may be checked temporarily because of the pressure of the clotted blood on the torn vessels.

Clinically spontaneous rupture of the uterus is her-alded by a sharp “shooting” pain in the lower abdomen, which usually occurs at the height of an intense uterine contraction. Abdominal tenderness, particularly at the level of the lower segment, is a salient feature. Fetal heart beats and fetal movements may immediately cease. The fetus lies in the abdominal cavity with the presenting parts out of the pelvis. It should be strongly suspected when the previously engaged presenting part is suddenly disengaged from the pelvis. This can be conﬁrmed by bedside ultrasonography. The tear in the lower segment can sometimes be felt through the vaginal canal. Slight vaginal bleeding may or may not be present. Symptoms of shock may follow the episode, but the blood pressure may not fall precipitously. Tachycardia is more frequent than hypotension. Many ruptures remain silent and unrecognized for several hours, the only signs being abdominal tenderness and vague abdominal pain.

Rupture of the uterus in a previous cesarean section scar occurs more frequently after classic cesarean section than after the low cervical type. When vaginal delivery has been attempted in patients with a previous section, rupture occurs in 1% to 5% of cases, but the percentage is higher in the patients who have had more cesarean deliveries. Because this uterine rupture is more correctly a dehiscence of a previous incision, where scar tissue may have obliterated the major vessels supplying that area, in many instances little bleeding occurs, and the rupture may consequently remain silent for hours and days. The only sign that may be present is a slight abdominal tenderness on palpation of the region over the site of rupture. In some cases, herniation of the amniotic sac or of some fetal parts may be seen at operation.

Treatment is the same in all ruptures and consists of immediate laparotomy and delivery of the fetus. Cesarean hysterectomy is the method of choice for cata- strophic ruptures, except when the patient is young and desires more babies, in which case attempts at repair may be worthwhile.