The most common cause of direct injury to the vagina is childbirth. Before 1900, when most babies were delivered at home, these injuries were more frequent. Regardless of reﬁnements in obstetric management and surgical technique, such accidents, both minor and major, continue to occur. A large number of variables in a delivery may account for this, including precipitous labor with sudden expulsion of the head, abnormal presentation or progress necessitating operative delivery, the large size of the baby, unusually friable maternal tissues, or an exaggerated lithotomy position. Vaginal lacerations are more common and more extensive in nulliparous women in whom the musculature of the birth canal and perineum has not previously been stretched. 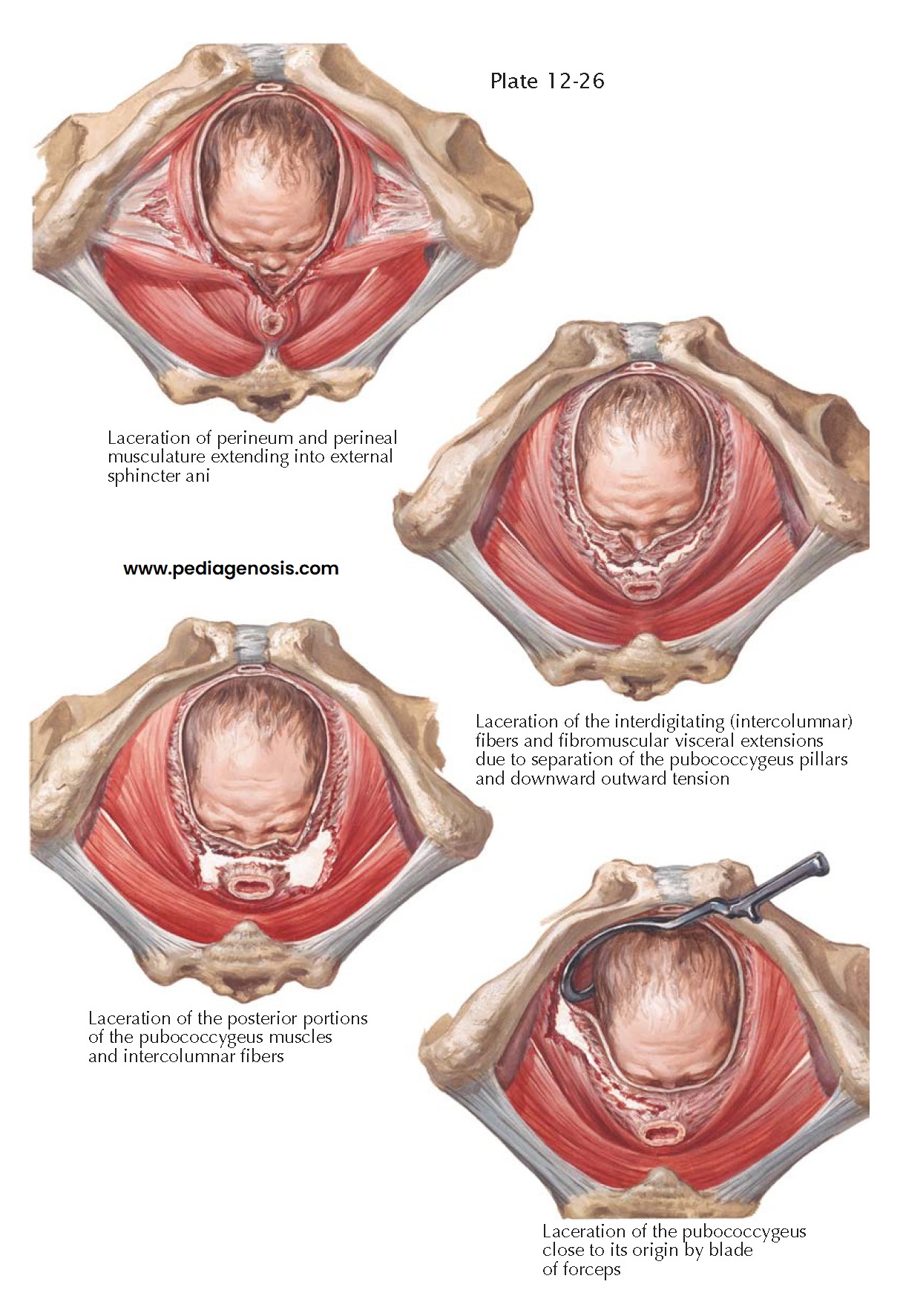 In the cases illustrated, the infant’s head has extended too soon, resulting in a near brow presentation, with increase in the diameter that must pass between the leaves of the pelvic sling at this level. The pressure thus exerted on the vaginal tube and its muscular supports has spread in several directions, but especially posteriorly toward the anus. The superﬁcial muscles of the perineum, including the transverse perineal muscles, the upper margin of the external sphincter ani, and the more superﬁcial ﬁbers of the pubococcygei have been ruptured to form a gaping wound. Some pressure has also been disseminated laterally, tearing the bulbocavernosi and shredding the thin inferior fascia of the urogenital diaphragm. Both urinary and fecal incontinence may result from such an injury. Infrequently, such lacerations are also associated with rectovaginal ﬁstula formation, especially when damage to or frank laceration of the rectal mucosa goes unrecognized and unrepaired.

Because the vagina passes downward and forward in the interlevator cleft connected by musculofascial extensions to the pubococcygeus muscles on either side, downward traction on an infant’s head impeded in mid- vagina may easily tear these connections as well as the interdigitating muscle ﬁbers between the vagina and rectum. The vagina is completely separated from the rectum above the level of the external sphincter ani, and the separation continues laterally without damaging the major divisions of the pubococcygei. This injury occurs at about the level of the ischial spines and may be caused by an attempted forceps extraction.

A more severe laceration at approximately the same level, in addition to separating the pillars of the pubococcygei by rupturing their attachments to the lateral and posterior vagina, may tear the posterior puborectalis components, which give the principal support to the rectum and pelvic ﬂoor. The postpartum clinical effect of this is the development of a rectocele.

An aberrant application of forceps may cause a deep tear in the pubococcygeus muscle close to its origin on the inner surface of the superior pubic ramus. Damage of this type is difﬁcult to recognize or repair at the time of delivery, and serious hemorrhage or hematoma formation may ensue. The tear often extends downward to separate the right lateral and posterior vagina from its supports and from the anterior rectal wall, with loss of almost an entire wing of the pelvic diaphragm. In the months following delivery, this may lead to varying degrees of prolapse of the pelvic viscera.

When forceps delivery was more commonly employed, rare cases of uterine rupture occurred during the process of placing the forceps blades or during forceps rotation. When forceps are used, and vaginal bleeding persists, the possibility of a lower uterine tear should be considered and evaluated by manual uterine exploration.

As with all surgical procedures, clear visualization, meticulous hemostasis, careful tissue handling, and tension-free, anatomically correct reapproximation of any tissues damaged are most likely to achieve a satisfactory outcome.