Puerperal infection generally refers to an infection of the genital tract in the postpartum period. For centuries, puerperal infection was the leading cause of maternal death, though this has changed dramatically with the advent of antibiotics. Maternal death rates associated with infection account for approximately 0.6 maternal deaths per 100,000 live births. Endometritis is the most common form of postpartum infection, though other sources of postpartum infections include postsurgical wound infections, perineal cellulitis, mastitis, respiratory complications from anesthesia or under-lying pulmonary disease such as asthma or obstructive lung disease, retained products of conception, urinary tract infections, and septic pelvic phlebitis. Overall, postpartum infection is estimated to affect 1% to 3% of normal vaginal deliveries, 5% to 15% of scheduled caesarean deliveries, and 15% to 20% of unscheduled caesarean deliveries. 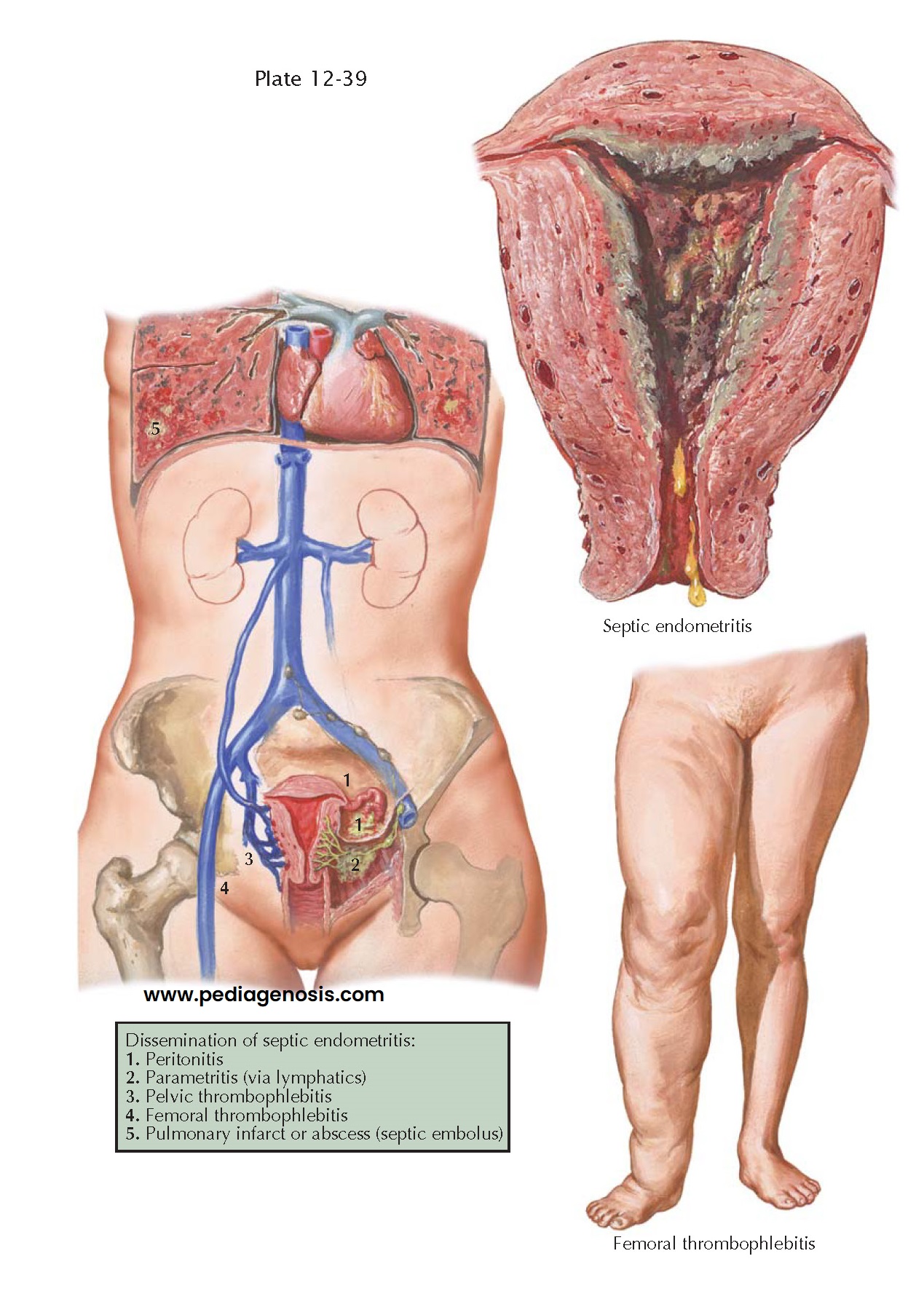 The organisms responsible for the vast majority of puerperal infections are the anaerobic and aerobic nonhemolytic varieties of streptococci. These organisms are usually present in the birth canal, becoming pathogenic when carried to the uterine cavity during or after delivery.

Postpartum endometritis is typically a polymicrobial infection (70% of cases) involving a mixture of two to three aerobes and anaerobes from the genital tract. In most cases of endometritis, the bacteria responsible are those that normally reside in the bowel, vagina, perineum, and cervix. Commonly isolated organisms include Ureaplasma urealyticum, Peptostreptococcus, Gard- nerella vaginalis, Bacteroides bivius, and group B streptococci. Other, though less frequent, organisms causing puerperal infection are Staphylococcus albus (Micrococcus pyogenes), anaerobic organisms, and the colon bacillus (Escherichia coli). Chlamydia has also been associated with late-onset postpartum endometritis.

Inadequate asepsis during labor and delivery, repeated vaginal examinations, and the use of contaminated materials are avoidable factors in the pathogenesis. Coitus late in pregnancy also has been considered to help disseminate inoculation and infection. Blood loss and trauma are considered the most frequent predisposing causes of puerperal infection. Trauma creates a portal of entry and produces a favorable environment for the development of virulent bacteria. Prolonged labor, particularly with early rupture of the membranes, retention of placental tissues and major vaginal procedures producing vaginal and cervical lacerations may initiate or foster puerperal infection.

The pathologic ﬁndings in puerperal infection are similar to those of any other wound infection. Following delivery of the fetus and placenta, the endometrium favors bacterial growth. Infection of the episiotomy and vaginal lacerations may occur, but these are less frequent than endometritis. This latter is by far the most frequent site of puerperal sepsis. The appearance of the endometrium and its discharge vary according to the infecting organisms. It usually appears necrotic and yellowish green but may be black from decomposed blood. The inﬂammatory process may remain in the uterine cavity, spread to the parametrial tissues, or become widely disseminated. From the endometrium, the inﬂammatory process may extend along the uterine and other pelvic veins, resulting in pelvic thrombophlebitis. Thrombophlebitis of the leg veins may also be seen. Extension of the inﬂammation through the lymphatic channels to the parametrial tissues and peritoneum results in parametritis, pelvic cellulitis, and peritonitis. Distant spread to lungs or liver may occur in the form of septic emboli and therewith cause septic infarcts and abscesses.

The diagnosis is usually made without difﬁculty. Fever occurring in the postpartum period, accompanied by lower abdominal tenderness, should be considered to be a puerperal infection until  proved otherwise. Extreme abdominal and uterine tenderness together with rigidity of the abdominal walls and absence of peristalsis are indicative of generalized peritonitis. The character and odor of the lochia may help in making the diagnosis and sometimes in recognizing the organisms. Some infections, notably those caused by group A-hemolytic streptococci, may be associated with scanty, odorless lochia.