The disruptive behavior disorders (DBDs) are mental health problems occurring in children and adolescents, more commonly in boys, characterized by out-of-control behavior. Prevalence rates vary from 1% to 16%. A cluster of factors, including the child’s characteristics, parental interactions, and environmental factors contribute to their development. 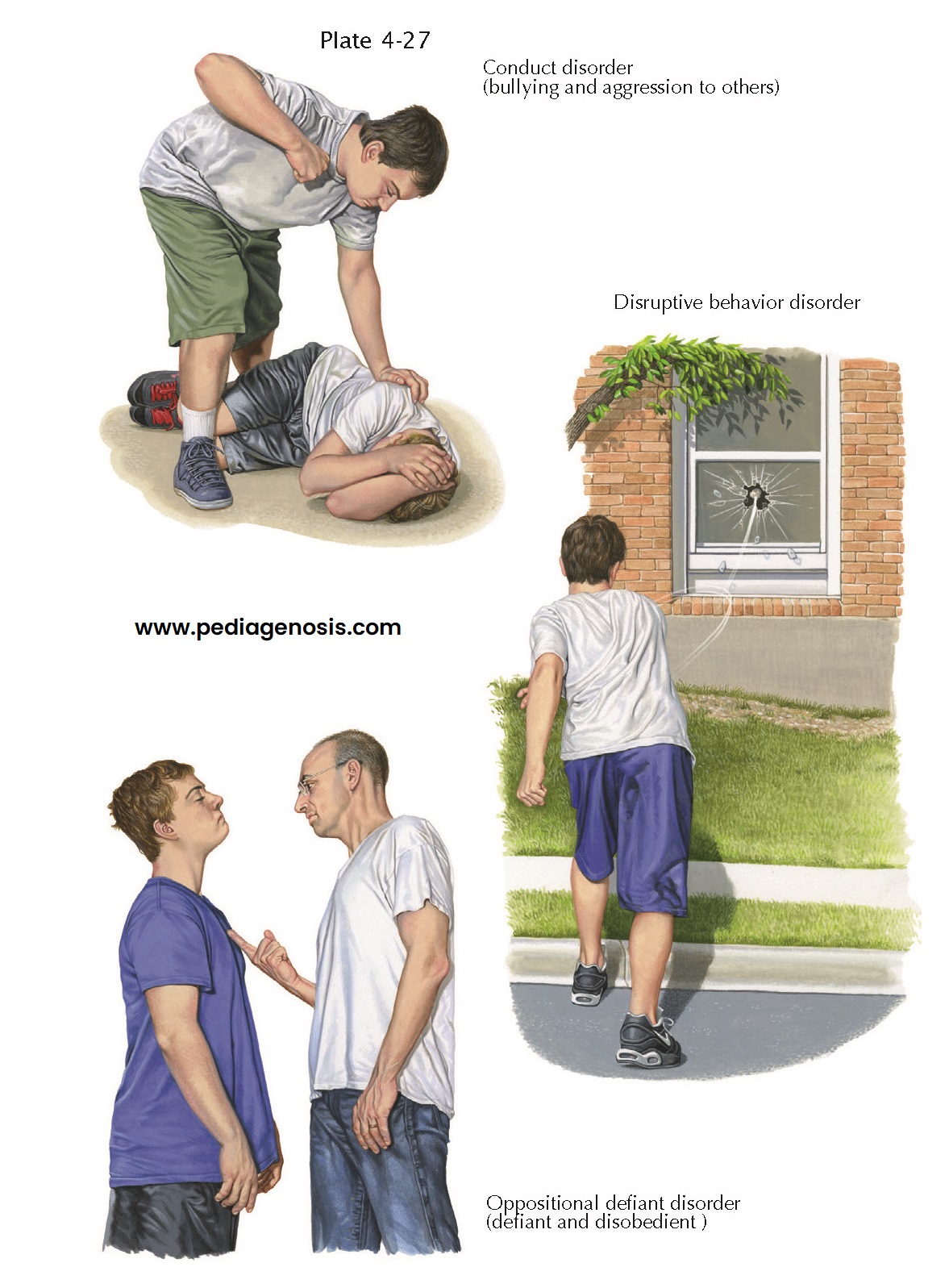 The DBD child may be strong-willed because of genetically inherited personality characteristics, certain intrauterine exposures (such as cigarette smoking), lack of positive parental attachment, because of stress, or a lack of predictable structure in the home or com- munity environment. Disruptive behavior disorders are more common in families with serious marital discord, families of low socioeconomic status and in neighborhoods characterized by high crime rates and social disorganization.

Oppositional Defiant Disorder. Oppositional defiant disorder is the less severe. It is characterized by a recurrent pattern of negativistic, defiant, disobedient, and hostile behavior, such as deliberately annoying others, frequent arguments, and angry outbursts directed toward authority figures, that is, parents and teachers. To confirm the diagnosis, these behaviors must be more frequent and more severe than normal children exhibit, present at least 6 months and impair the youth’s function at home, at school, or with peers.

The more serious DBD—conduct disorder—is characterized by a persistent pattern of serious rule-violating behavior, including instances that harm or have the potential to harm others. Physical aggression to people and animals, destruction of property, lying or stealing, running away from home, and truancy are typical examples. Boys are more likely to have conduct disorder compared with oppositional defiant disorder. Rather than physical aggression, girls are more prone to use verbal attacks, ostracism, or character defamation. To confirm this diagnosis, DBDs must be present at least 1 year, impairing the youth’s home, school, and/or peer function.

Diagnosis. DBDs are most accurately diagnosed by child and adolescent psychiatrists, child psychologists, child-trained social workers, and clinical nurse specialists. The evaluation requires input from multiple individuals who know the child. The diagnosis is based upon findings from interviews and a mental status examination. There are no specific diagnostic imaging studies, blood tests, or other medical tests that are diagnostic.

Treatment. The best therapy for oppositional defiant disorder is helping the parent learn effective parenting strategies. Treatment goals include helping the youngster become more cooperative and less argumentative or destructive. It is very useful to ascertain the child’s and family’s strengths and build on them in addition to focusing on their problems. Behavior modification strategies include developing a warm, loving relationship between parent and child; providing a predictable, structured environment; setting clear and simple house-hold rules; consistently praising and rewarding positive behaviors (such as completing chores or homework); consistently ignoring annoying behaviors (such as whining or arguing), followed by praise when the annoying behavior ceases; and consistently outlining potential consequences (such as loss of privileges) for dangerous or destructive behaviors. Social-emotional skills training for the child, helps them develop skills to identify and manage feelings, get along with others, and make good decisions based on thinking rather than feeling.

Because conduct disorder is an extremely serious condition, treatment must be more intensive and extensive, sometimes involving other child-serving agencies (i.e., juvenile justice and child welfare). Treatment is likely to be effective when administered early in the course of the disorder before maladaptive behaviors become more entrenched. If physically aggressive behavior is prominent in conduct disorder, medications (including atypical antipsychotics) can be helpful.

Course. Oppositional defiant disorder, and to a lesser extent, conduct disorder respond well to the above treatments when delivered by qualified mental health professionals. Although some children grow out of the DBDs, if untreated, these disorders can go on to cause significant problems, including difficult relationships with parents and other adults, failure at school and delinquency, and in adulthood, antisocial or criminal behavior.